Tarja Halonen, a former student of the Faculty of Law at Helsinki University,  served as the president of Finland from 2000 to 2012. She was the 11th present of the Finnish republic and the first woman to hold that position. Previously, she also served as a Minister of Social Affairs and Health, Minister of Justice, and Minister for Foreign Affairs.

President Tarja Halonen is a member and former chair of the Council of Women World Leaders, an international network of current and former women presidents and prime ministers whose mission is to mobilize the highest-level women leaders globally for collective action on issues of critical importance to women and equitable development.

President Tarja Halonen, Helsinki University is your alma mater. What did you study and when was that?

I studied for my Master’s of Law in Porthania from 1963 to 1968. I continued to keep an eye on Licentiate opportunities while working at the secretariat at the National Union of University Students of Finland.

How do you remember Porthania’s study spaces and lecture halls?

They were very modern, especially in comparison to the main university building.

Did you attend lectures or did you prefer to study solely for the exams?  If you attended the lectures, what memories do you have of your teachers?

We had very few lectures. Studying took place primarily through self-study at the library, at Porthania, the study hall on Richardinkatu, or, in an emergency, at Domus Academica. Most law textbooks were sold out long ago and you occasionally had to do some detective work to find the book you needed. The few copies the library had were regularly misplaced so their previous readers could return to them before others could find them.

Did you have any female teachers?

Professor Inkeri Anttila was the only female teacher I had. She was good. She also held a criminology degree from the social sciences department. Because I specialised in criminal law, I had the honour of working with her. My dissertation concerned the supervision and guidance of young law breakers, which I would have also continued to study had things gone differently. Anttila was my absolute favourite lecturer.

In your career, you have held challenging international roles, e.g., you represented Finland at the European Union, United Nations, diplomatic conferences and other multilateral fora at numerous occasions. I remember, for example,  your speech at the Diplomatic Conference on the establishment of an international criminal court in Rome in 1998.  How did studying law at Helsinki University prepare you for these international tasks? Did you study international law as part of your degree?

I completed one exam in international law. Studying law helped me to understand the need to orient and familiarise myself with a topic, especially if it was a completely new subject matter.

What would you like to pass as a message to the current law students at Porthania?

Demand changes from the university if the curriculum does not reflect real world needs, on e.g. sustainable development. Make the most of your time as students! 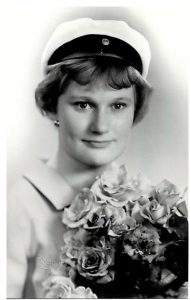