Our research group is focused on studying the role of prolyl oligopeptidase (PREP, formerly known as POP) in neurodegenerative diseases.

Our group has a strong background in PREP studies. PREP is a serine protease, that cleaves short peptides containing proline-residue – at least in vitro. It can be found in most of the species, from bacteria to human. Since PREP activity is changed during aging and neurodegenerative disorders, such as Alzheimer’s and Parkinson’s diseases, the hypothesis was that PREP could reduce the levels of neuropeptides and thus worsen the symptoms of these diseases. If PREP is blocked by PREP inhibitor, it could maintain the neuropeptide levels and maybe delay the cognitive problems of neurodegenerative diseases. However, despite of intensive studies during 1980-2005, the effects of PREP inhibitors on brain neuropeptide levels were controversial. Meanwhile, the physiological function and e.g. distribution of PREP remained unclear.

We clarified the distribution of PREP protein in humans, and in our latest finding we connected PREP to angiogenesis. However, PREP raised again interest in neurodegeneration when Brandt et al. (2008) connected PREP to enhanced accumulation α-synuclein in vitro. We continued these studies in cellular and in vivo level, and initially, we also found that the direct interaction between these proteins leads to increased α-synuclein aggregation. Moreover, our studies led to finding that PREP inhibition enhances the clearance of protein aggregates via enhanced autophagy. Increase of autophagy has been shown to have beneficial effect also on other models of neurodegenerative diseases with protein accumulation, such as Tauopathies and Alzheimer’s diseases. Therefore, our interest is also in Tau related diseases.

Our research is focused on understanding the mechanisms of how PREP increases the accumulation of protein accumulation, and studying if PREP inhibitors are effective in preventing the aggregation-prone protein accumulation or even dissolve the surplus of protein aggregates from cells. Currently, a lot of our research efforts are also in studying the role and mechanisms of PREP and its inhibition on autophagic clearance of protein aggregates. To achieve the goals of our studies, we use several in vitro, cellular and in vivo methods. 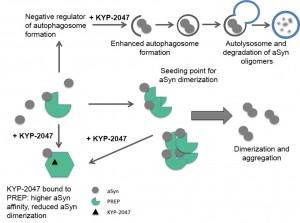 Schematic figure of our research goals and strategies