Copies of the JRA Supplement volume have arrived from the press! 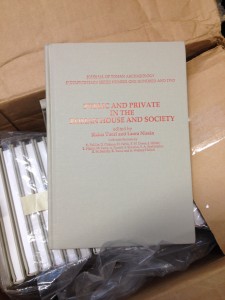 Order the PPRH volume from the Journal of Roman Archaeology!

Copies of the Supplement are now available for order at the JRA for a special price of 79 US dollars! For a full outline, see here.

Posted on 12.2.2016 by katuori
Our panel at the TRAC meet in Rome next month is here.
Panel: Beyond Public and Private in the Roman House
Wednesday, 16 March 2016 from 14:00-18:00
Panel composition:
Kaius Tuori (chair)
1. Carla Brain: Venus in Pompeian Domestic Space
2. Laura Nissin: Questioning the functions of the cubiculum in the archaeological and literary sources
3. Antonella Pansini: The domus of Apuleio at Ostia Antica
4. Samuli Simelius: Were peristyles conspicuous consumption or a functional addition to the atrium house?
5. Polly Lohmann: Private Inscriptions in Public Spaces?
6. Thomas J. Derrick: Structuring Olfactory Space in the Roman House
Posted in Events/conferences/workshops | Leave a comment

Lecture: Communication and publicity of the law in Rome

Professor Rena van den Bergh from the University of South Africa will give a talk titled “Communication and publicity of the law in Rome”. The presentation will explore how public policy such as law was communicated through the Roman empire, the means by which imperial letters, rescripts and laws spread via the road network and how this was affected by the spread of Roman citizenship in the provinces. The lecture will take place on Monday 25th January, 4-6 pm at Unioninkatu 37, seminar room 1094. The lecture is open for all. Welcome!

We are happy to announce that the collected volume of the project, creatively titled PUBLIC AND PRIVATE IN THE ROMAN HOUSE AND SOCIETY, edited by Kaius Tuori and Laura Nissin, is at the printer and will be published in the fourth week of January. Contributors are K. Tuori, H. Fertik, E. M. Steinby, A. Russell, L. Bablitz, M. Perry, S. Speksnijder, L. Nissin, S. Simelius, F. M. Green, R. Cribiore, J. Hilder & A. Wallace-Hadrill. The volume appears as the Supplement 102 of the Journal of Roman Archaeology.

The PPRH project is organizing a session in the next Theoretical Roman Archaeology Conference (TRAC). The name of the session is “Beyond Public and Private in the Roman House“.

Studies on domestic space in Roman contexts have shown that the private house (domus) was the economic and social centre of its owner. Houses were designed to suit both the private life of its occupants and the demands of public life. Movement inside houses and the use of space was guided with the help of decoration and structures.

The purpose of this session is to go beyond the dichotomy of public and private spheres of the Roman house through a re-evaluation of the material remains and literary evidence. The time-frame would be from the first century BCE to the third century CE. As an interdisciplinary enterprise, the session seeks to combine historical, archaeological, philological and architectural analyses to further the understanding of the function of the domus as a place for social, cultural, political and administrative action. Often overshadowed by modern presuppositions regarding the functions of spaces within a home, the tradition of assigning a single purpose to each space has only recently been subjected to serious criticism due to the contradictions of material finds with the assumptions regarding the use of that space.

The orthodoxy in the older scholarship supported a very rigid view of the domus as divided between a public and private sections, with the same division acting as a gender marker for the male political activities within the political sphere and the female activities of nurturing and housekeeping within the domestic sphere. Thus the house would have followed the pattern of the familia with the paterfamilias with his sons taking care of the outside relations and the women taking care of the home. This division now outdated within the household, the aim of this session is to take a fresh look at conceptions of public and private within the house. Drawing from the suggestions of new theoretical and archaeological developments, we seek to explore how functions of spaces within the house were created by the actions of its inhabitants instead of being predetermined.

Dr. Rick Bonnie (University of Helsinki) will give a lecture on “Ritual bathing in the private houses? Evidence of stepped pools in Galilee, c. 100 BC–AD 70”. Dr. Bonnie is a post-doctoral researcher in the Centre of Excellence in “Changes in Sacred Texts and Traditions”, Department of Biblical Studies at the University of Helsinki. The lecture is held in the seminar room of Classical Philology (A215) in Metsätalo (Unioninkatu 40, A-wing, 2nd floor. Entrance through the 3rd floor) on Wednesday April the 15th, 2015, at 6.15 pm. Welcome!

Abstract:
From the wide distribution of stepped pools at sites across Israel/Palestine, it is usually argued that by the first century BC the Jewish population in general observed the practice of ritual bathing. This argument is, however, primarily supported by a weak contextualization of the archaeological evidence. As will be argued through a case study from the region of Galilee (northern Israel), the observance of ritual bathing was not evenly spread across the Jewish population. Moreover, by focusing on the context of these pools in Galilean private houses, this research aims to better understand the role and significance of these features within a Jewish household in particular and society in general.

Mr. Janne Pölönen from the Federation of Finnish Learned Societies will speak about the much-discussed process of ranking scientific journals and what that will mean for the humanities and social sciences, using legal history, classics and European studies as examples. The location is the faculty room of Social Sciences (Unioninkatu 37, 1st floor) on Monday November 24th at 16.15 pm.