So in this blog I talk a lot about seaweeds, but what exactly are seaweeds? Seaweed is a common name used to refer to marine macroalgae, a type of large algae. So seaweeds are large algae that live in the sea. But this just seems to raise the bigger question: what are algae?

Most people probably know algae as the clumps of seaweed spoiling the beach or the green stuff that wraps up your sushi. 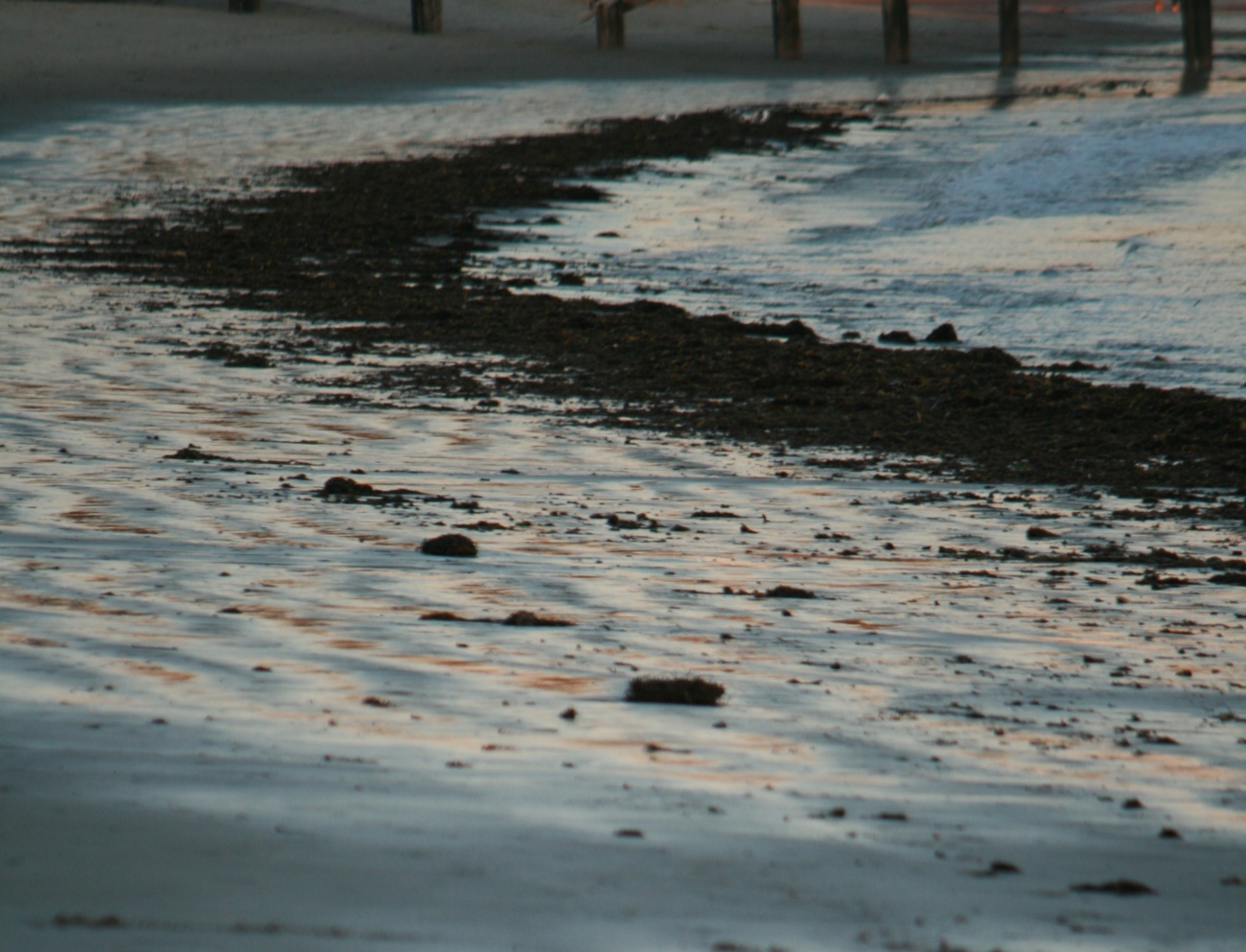 Seaweed washed up on the beach. Goleta. California. United States.

But algae can come in a vast array of shapes and sizes. The term algae actually encompasses a large range of organisms, from single celled individuals that are a similar size to bacteria, up to large multi-celled, plant-like organisms up to 53m in length in the case of giant kelp. 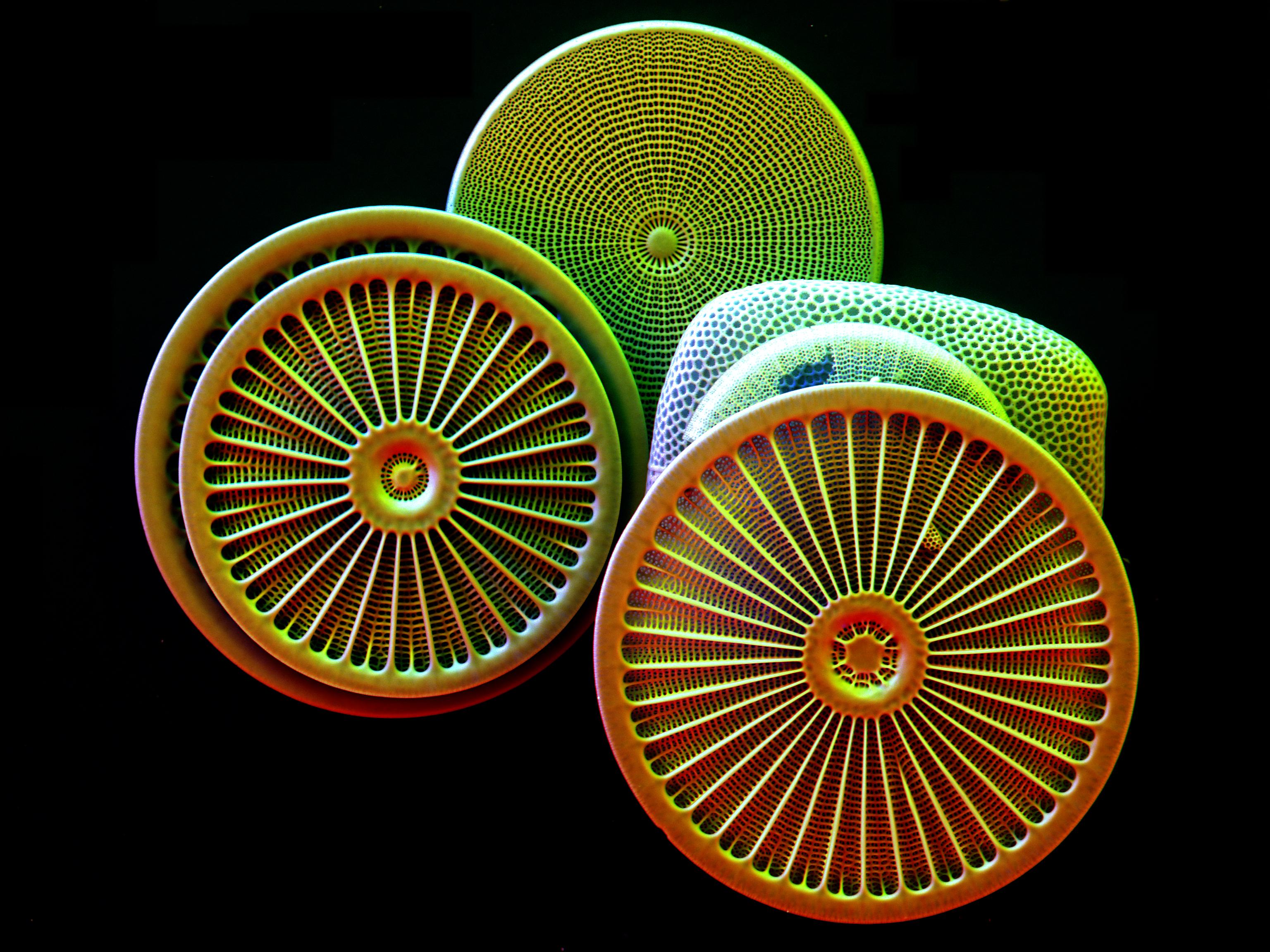 Algae are not always alone, and can actually be found forming important symbiotic relationships with many marine animals, the most notable being that with corals, but also with jellyfish, sea anemones and even clams. These algae are provided shelter within the animal whilst in exchange providing nutrients to their animal host in a mutually beneficial relationship. 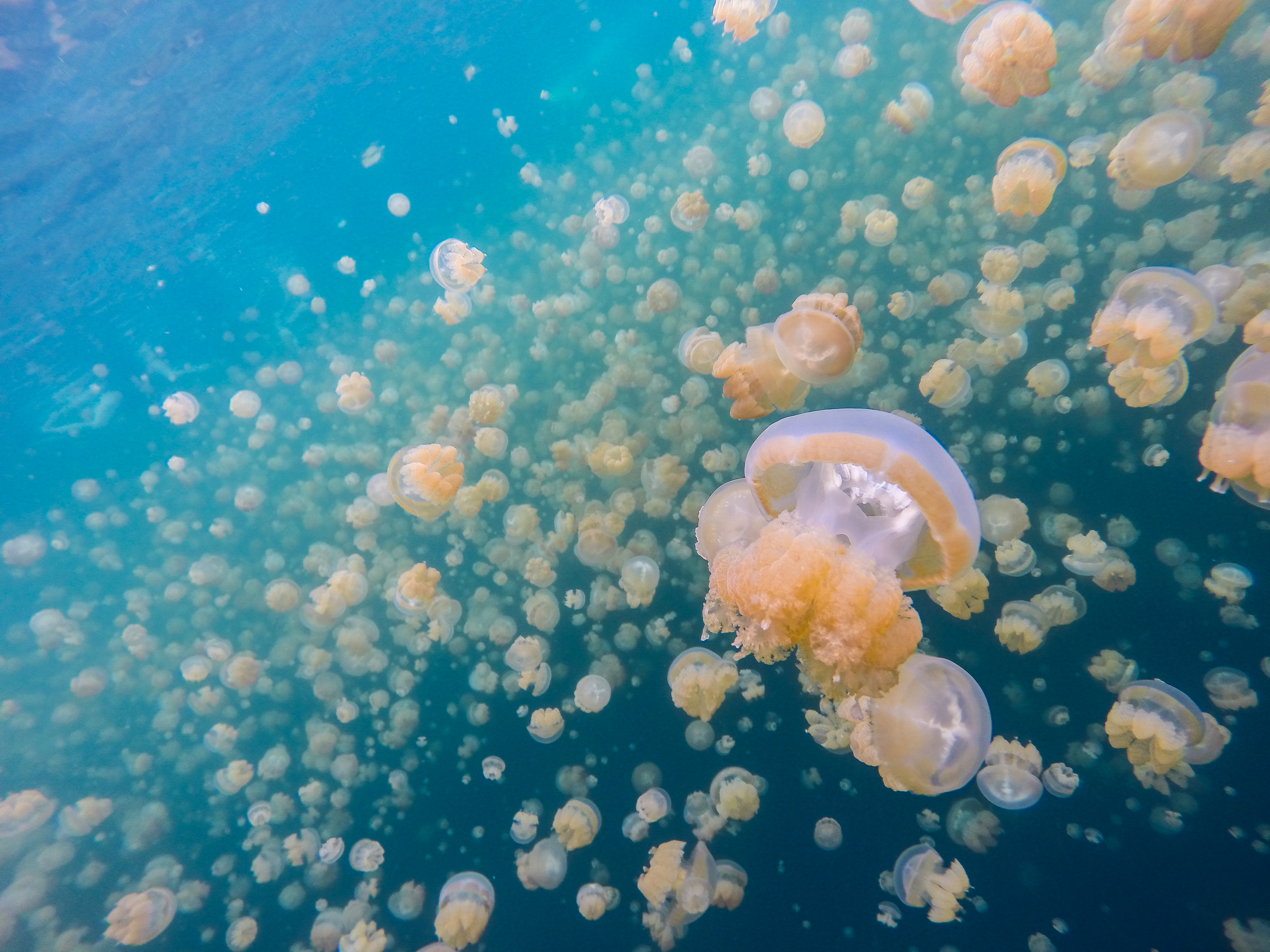 Algae are grouped together in a rather informal way, with many members not necessarily being closely related. These algae can come from multiple lineages, meaning that they are grouped together despite not sharing an immediate common ancestry. This explains why we see such a diverse range of characteristics within the group.

However though a diverse group, they do share one crucial similarity: they are photosynthetic. But then are algae plants? The answer is slightly contentious, but generally, we define them not to be. To be a plant you need a root or internal vascular systems and to produce seeds or flowers, which algae do not. Some algae can have similar looking structures, such as the vein-like midrib in bladderwrack, but these are not true vascular systems. Unlike plants, the body of an alga is relatively undifferentiated, whereby there is no division of labour within the algal body.

So algae are a group of photosynthetic organisms that are corralled into a group because they do not fit well into the other more well-defined photosynthetic groups like plants, fungi and lichens. Hence it really isn’t unsurprising that they are so diverse.

The greatest anomaly within algae are the cyanobacteria. Cyanobacteria, also known as blue-green algae, are normally (but not always) included within algae and are probably most famous for forming a greeny sheen of scum on the surface of the water that stops you going in for a swim at the sea or lake side. 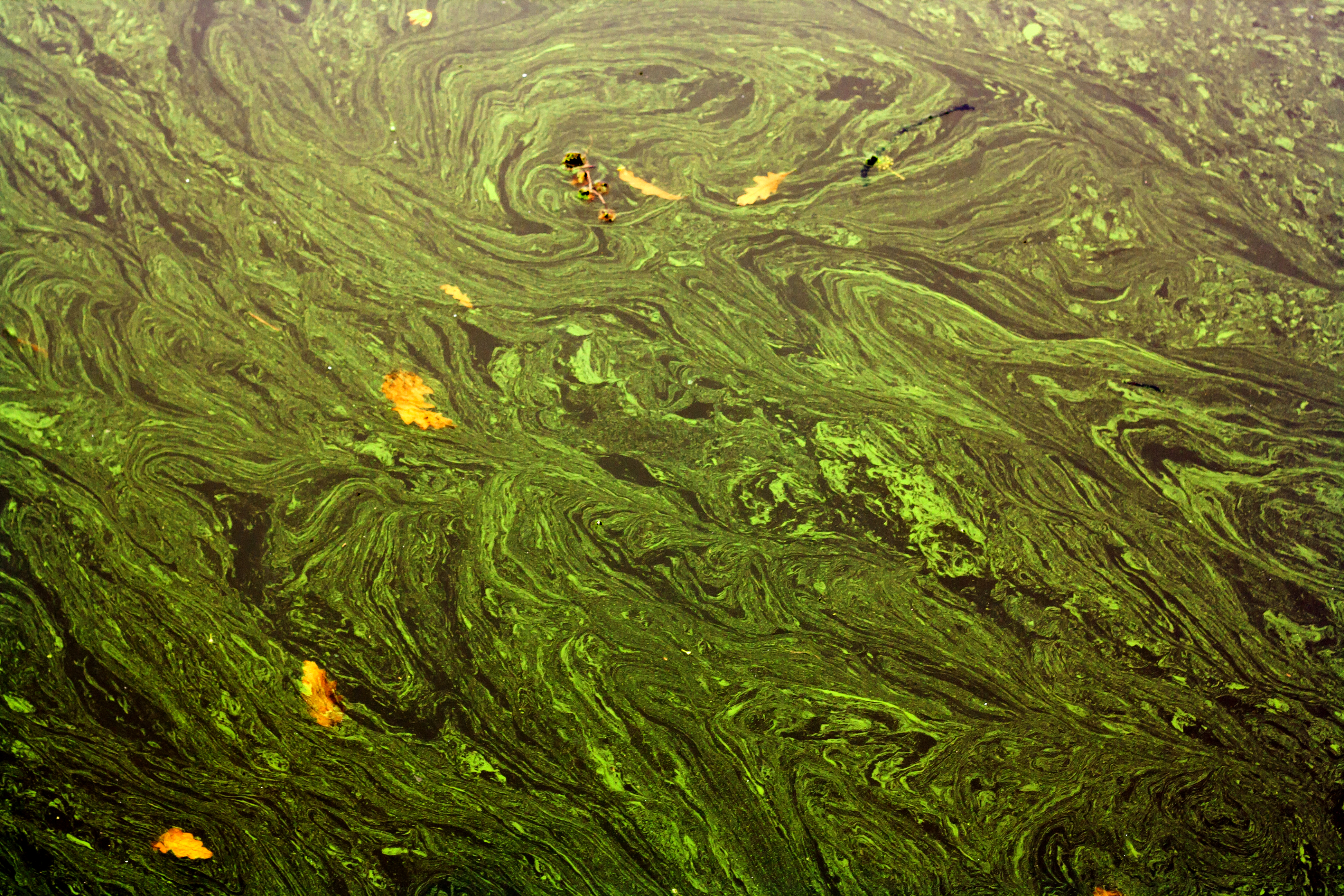 Cyanobacteria on the water’s surface

Cyanobacteria are actually very unlike all other algae, even residing within a different kingdom within the tree of life. Cyanobacteria reside within the kingdom of bacteria, alongside the familiar E. coli and Salmonella. Bacteria in general are primitive cells with a less complex structure and are always single-celled. These single cells can exist on their own or as several to many cells living in a colony, chain or filament. 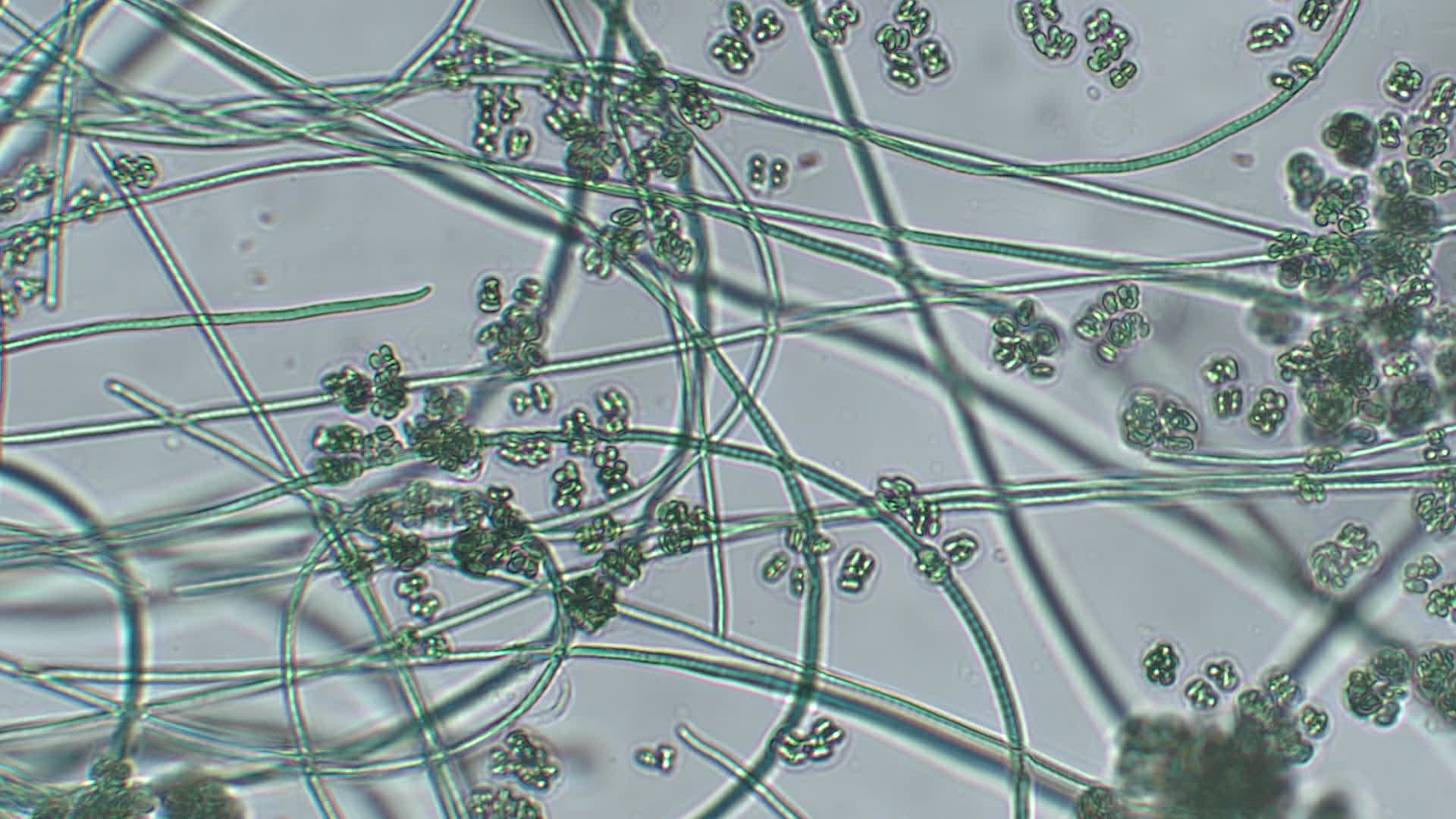 The Cyanobacteria: Oscillatoria and Gleocapsa.

All these algae belong to the kingdom of protista. Of these complex algae, there are three major groups: Green, Red, and Brown. As you may guess they are named for their usual colour.

The green group contains algal species within the scientific designation Chlorophyta, the red within Rhodophyta, and brown within Heterokonta, Haptophyta, Cryptophyta, and Alveolata. All algae within each of these groups share a set of characteristics that distinguishes them from those within another group, and thus are grouped accordingly. 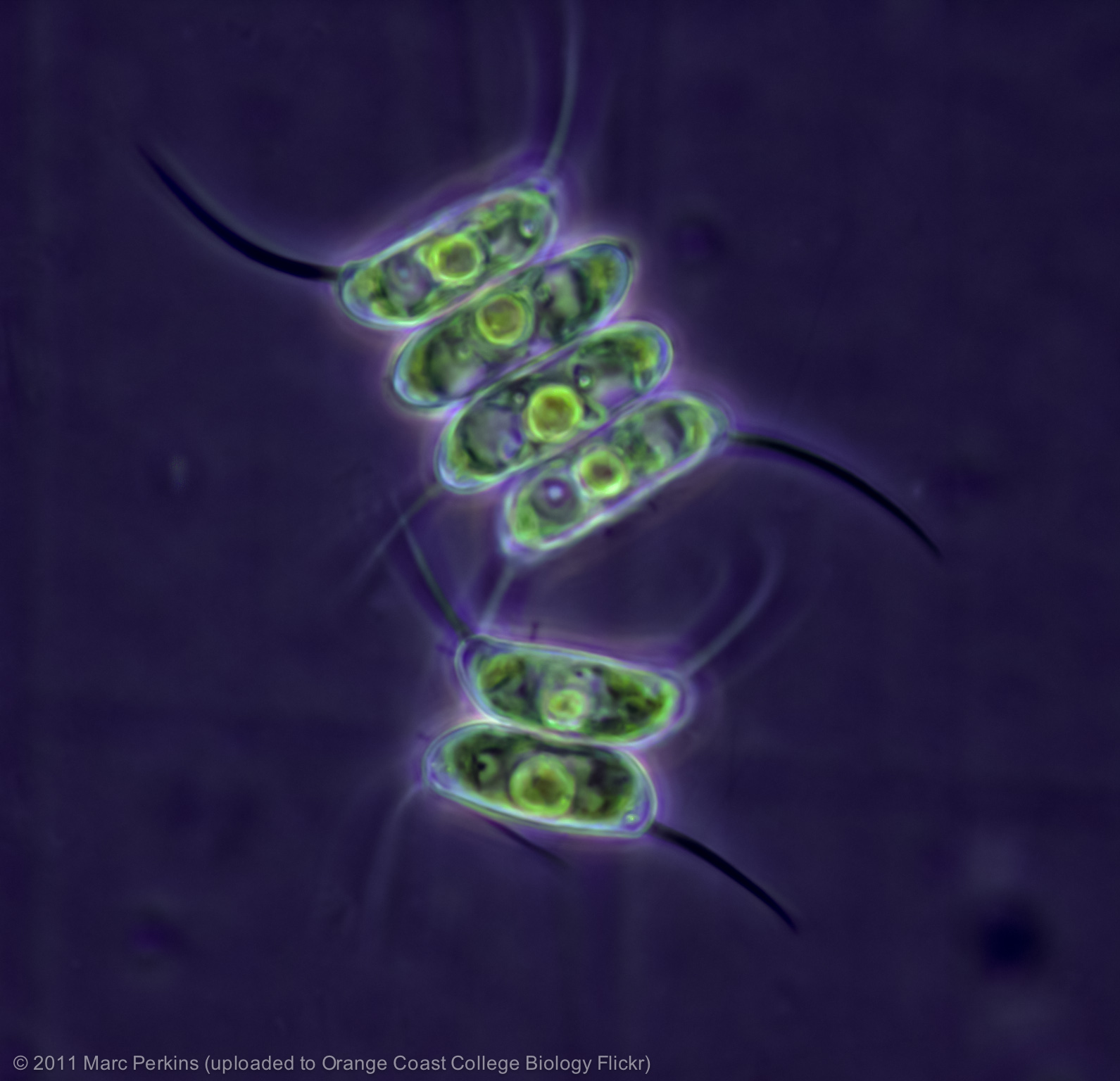 There are also a few other smaller groups of algae not contained within these three main groups. These are the freshwater Glaucocystophyta, the predominantly freshwater Euglenophyta, and the marine Chlorarachniophyta. They are all far smaller groups of solely single celled individuals with either 15, ~800 and 5 species respectively. Nevertheless the vast majority of algal species are grouped within the greens, reds and browns.

Green algae are the most closely related algae to plants, sharing a common recent ancestor. They can be found in both marine and freshwater environments. Examples of green algae include sea lettuce (Ulva spp) and Dead man’s fingers (Codium fragile). 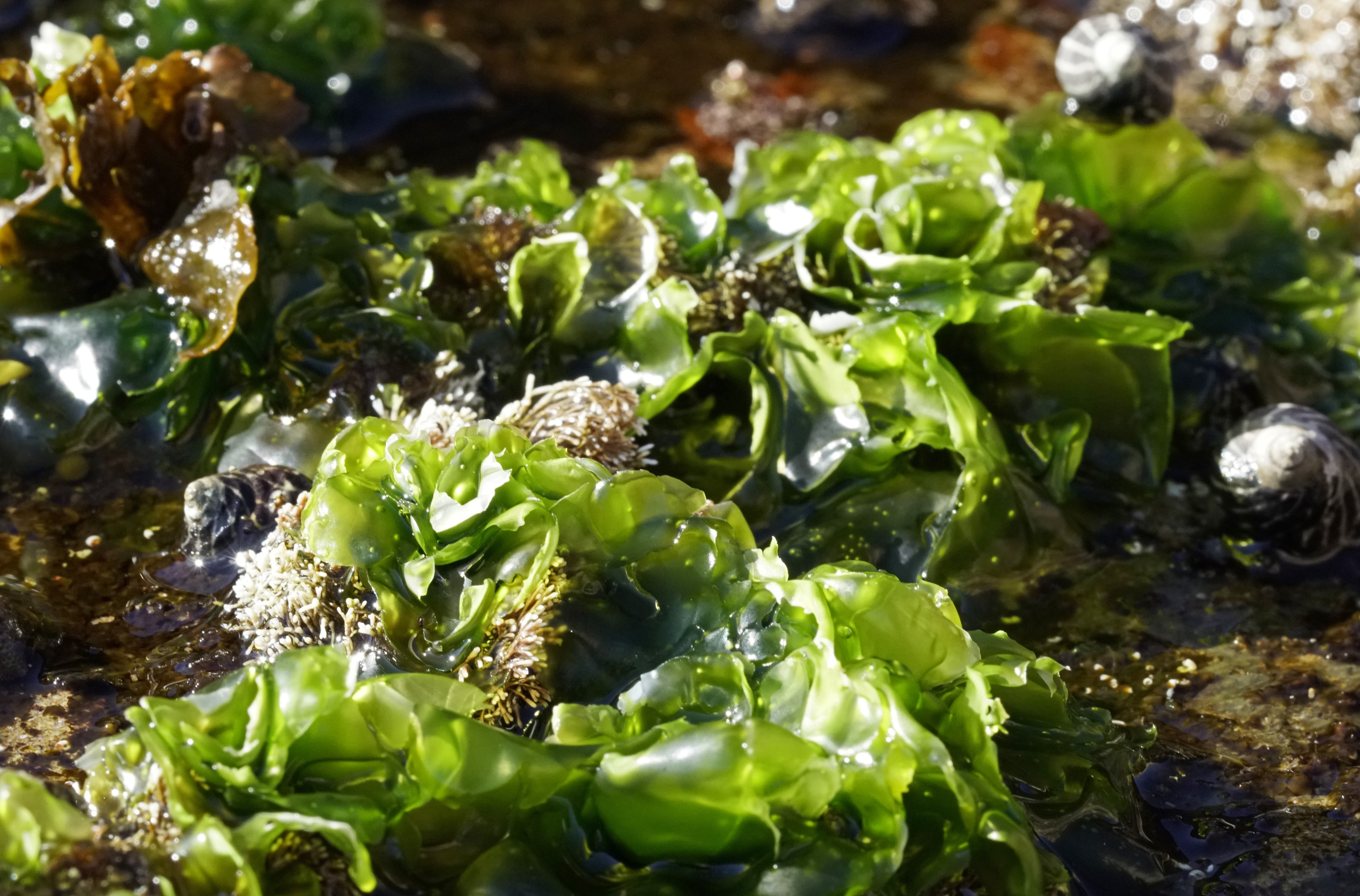 Red algae are mostly marine, and can be found living at greater depths than green and brown algae. This is because they can absorb blue light, which penetrates deeper than other light waves do, and thus they are still able to photosynthesise where other algae cannot.

Some red algae can even be reef builders, similar to that of the corals. Coralline algae are encased within calcareous deposits and form spiky underwater carpets known as maerl beds. These maerl beds are ecologically important, but unfortunately due to their fragility and slow growth are also under threat. 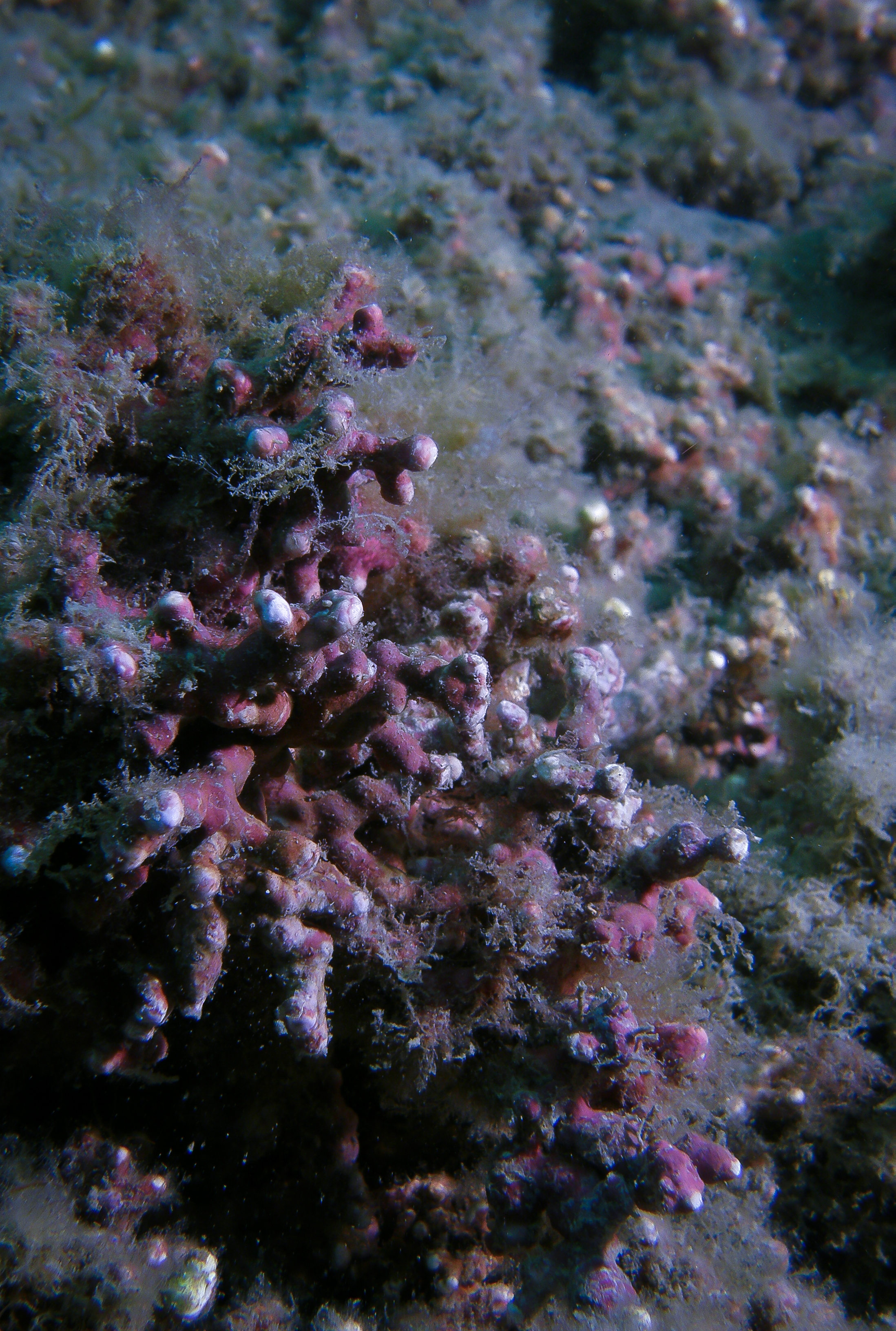 And finally brown algae. As you may guess from the larger number of subgroups included within the main group, brown algae are rather loosely gathered together. Many do not share common recent ancestors. They are mostly marine and also include the largest of the individual algae. Yes that is the kelps, and also bladderwrack and its relatives belong in this group too. But brown algae are not only large, there are also small single celled ones too, including the diatoms. Diatoms are little cells encased in glasshouses, and despite their small size play an important ecological role on a global scale.

So to conclude, algae are the misfits of the tree of life, they do not quite fit anywhere else so are instead lumped together in one big group. There are many differences within the group, but there are also similarities as well. Diversity of algae is vast, from tiny to giant, from simple to complex, but all need light to live. And the number of algae isn’t small either. Currently we have described 50,000 species of algae (Guiry & Guiry, 2020). That’s a lot of algae!