When I first came to Finland and started working with Baltic Sea bladderwrack I knew nothing about this unique sea. But if you ignore the fact that the Baltic Sea is so very different than the typical seas then you risks your ideas on the biology of any Baltic Sea plant animal or algae being wrong. So this month lets look at why the Baltic Sea is so unique.

The most defining feature of the Baltic Sea is the low salinity. In simple terms the salinity is the saltiness of the water. In typical seawater you would expect a salinity of 30-35‰ whereas in the Baltic Proper you will not experience salinity any higher than around half this value. Despite being called a sea, it does not possess the characteristic salty seawater you’d expect from that name. But though the Baltic Sea is not like typical seawater, it is also not like typical ponds, lakes or river either. In fact it’s waters lies somewhere in between the two, being not quite sea or freshwater either. The easiest way to describe it is brackish, a sort of halfway water, with the average salinity being just ⅕ of typical seawater (Leppäranta & Myrberg, 2009).

But does this really make such a difference? Well it certainly does! 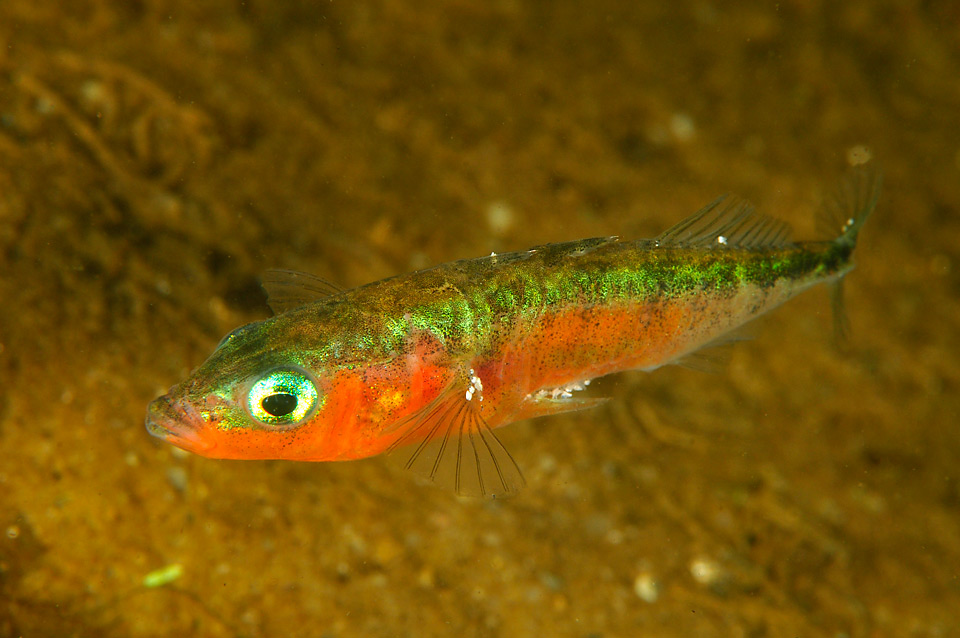 Three-spined stickleback (Gasterosteus aculeatus). A common fish found within the Baltic Sea with a widespread distribution throughout the Northern Hemisphere in both fresh and salt water.

Plants, animals and algae have preferred environmental conditions that they can tolerate. This can be considered a tolerance range. Most of us like the summer heat of 30°C and don’t mind a winter of -1°C, but if we were then forced to live in 70°C or -60°C we probably wouldn’t last long. So we can tolerate the moderate temperatures, but the extremes are too much to survive. Well this is the same for salinity. For example, marine fish do well within seawater and lake fish likewise in freshwater, but if you took a lake fish to the sea or a sea fish to the lake they would not be able to endure the different conditions. Each is adapted to tolerate the habitat that they live in.

Some of you might be wondering about some of the rather high profile fish that move between the sea and rivers (ahem..salmon..). Well it is true that some fish can move between salinity conditions, however for the most part they must slowly acclimatise to the new conditions undergoing changes to their bodies to allow them to tolerate the new environmental conditions. Acclimatising to extremes is possible, but not very common. Generally, most plants, animals, and algae have a range they can tolerate and if subjected to conditions outside of this then the results end badly.

So back to the Baltic Sea. As a brackish sea, marine life are out of their comfort zone, but so too are the freshwater species. This means that many marine species that you would find around the coasts of Europe cannot live in the Baltic Sea just as freshwater species in continental Europe cannot either. This results in species paucity: only a few inhabitant species. In fact the adjacent North Sea has ~10X more species than the Baltic Sea (Elmgren and Hill, 1997). Characteristic marine organisms such as starfish and sea urchins are missing from most of this sea, though other species that you wouldn’t expect from a sea which are pretty abundant such as the common reed.

In Fucus terms; the group of seaweeds that bladderwrack belongs to; you could expect to find anywhere up to 3 or 4 species on a typical British rocky shore, whereas in the Baltic Sea you would be lucky to find more than one. In fact, if you searched throughout the whole Baltic Sea you’d only find three native Fucus species: bladderwrack, narrow wrack and serrated wrack. 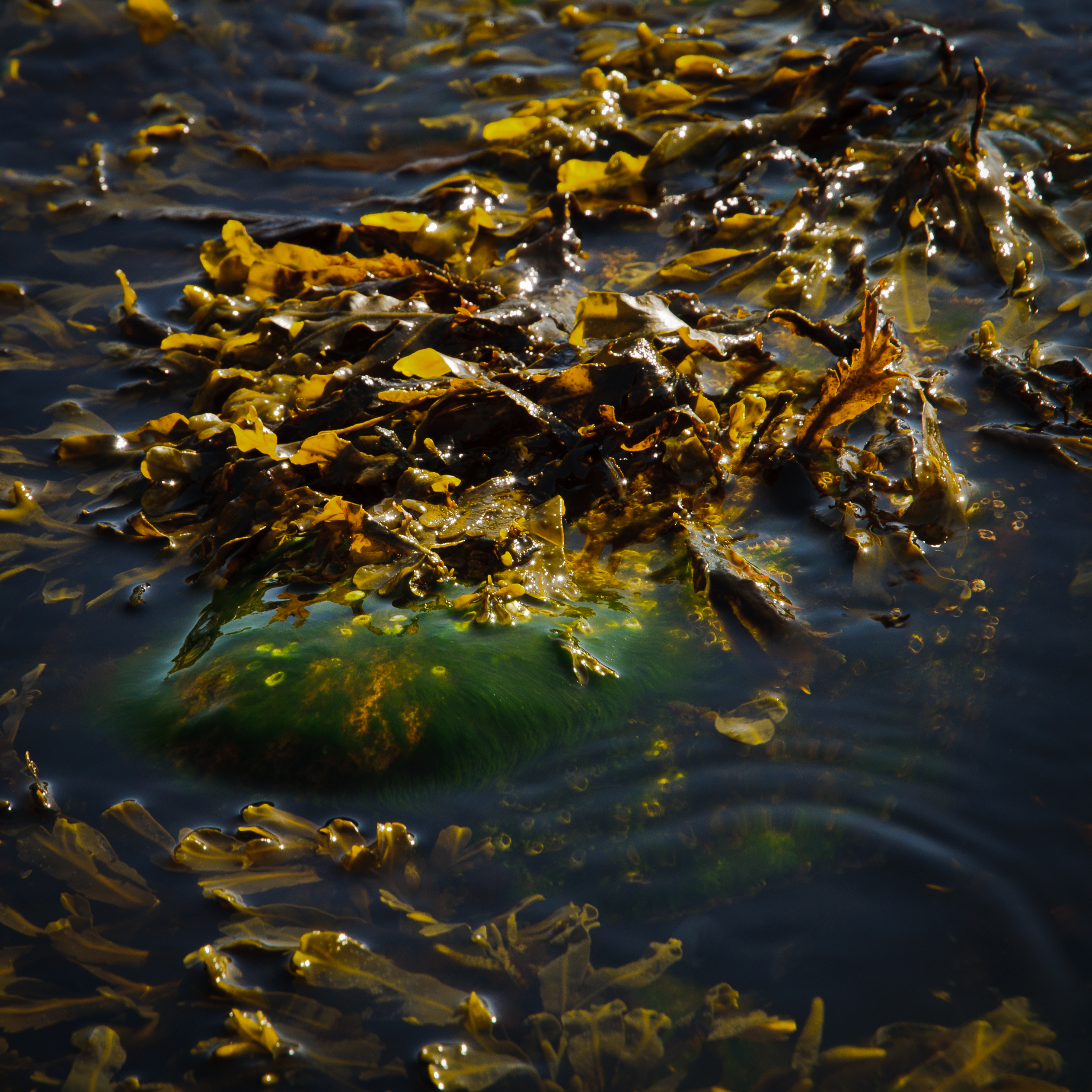 Though the salinity within the Baltic is always brackish, not every location is the same. In fact the salinity ranges from (20-)10‰ (depending on where you decide the Baltic Sea starts) down to less than 1‰ occurs (Waern, 1952). This range is actually quite predictable, forming rather well defined gradients.

But why do we see this gradient?

Salt water can only flow into the Baltic Sea from one relatively narrow location in the south over the Danish belts and the Swedish sound. These channels are shallow, narrow sills that restrict the flow of saltwater into the Baltic Sea. Because seawater is denser than fresh and brackish water it does not readily transfer over these shallow sills, with only a few major inflows happening per year. This means that the input of high salinity seawater into the Baltic Sea is rare. To add to this, the Baltic Sea is surrounded by land. This area of land surrounding the Baltic Sea that drains water into the sea is four times larger than the sea itself (Zillén et al., 2008). From this large area of land, freshwater can runoff into the Baltic Sea and consequently reduces the salinity. The largest single input of freshwater occurs in the Gulf of Finland by the river Neva, equating to 15% of the total Baltic river inflow (Alenius et al., 1998; Kuosa and Myrberg, 2009). Other large river inputs include the Vistula, the Daugava, the Nemunas, the Kemijoki, the Oder and the Göta Älv (Furman et al., 2014). Because the large rivers occur in the north or east and the only saltwater input comes from the south a well-defined south-north salinity gradient is produced.

So this all means is that the Baltic Sea is a semi-enclosed brackish system, where high salinity water is only provided in the south and freshwater input from the land dilutes the sea into the brackish conditions we see. But how long does water stay in the Baltic? Well it takes approximately 40 years for Baltic Sea water to be renewed (Leppäranta & Myrberg, 2009). 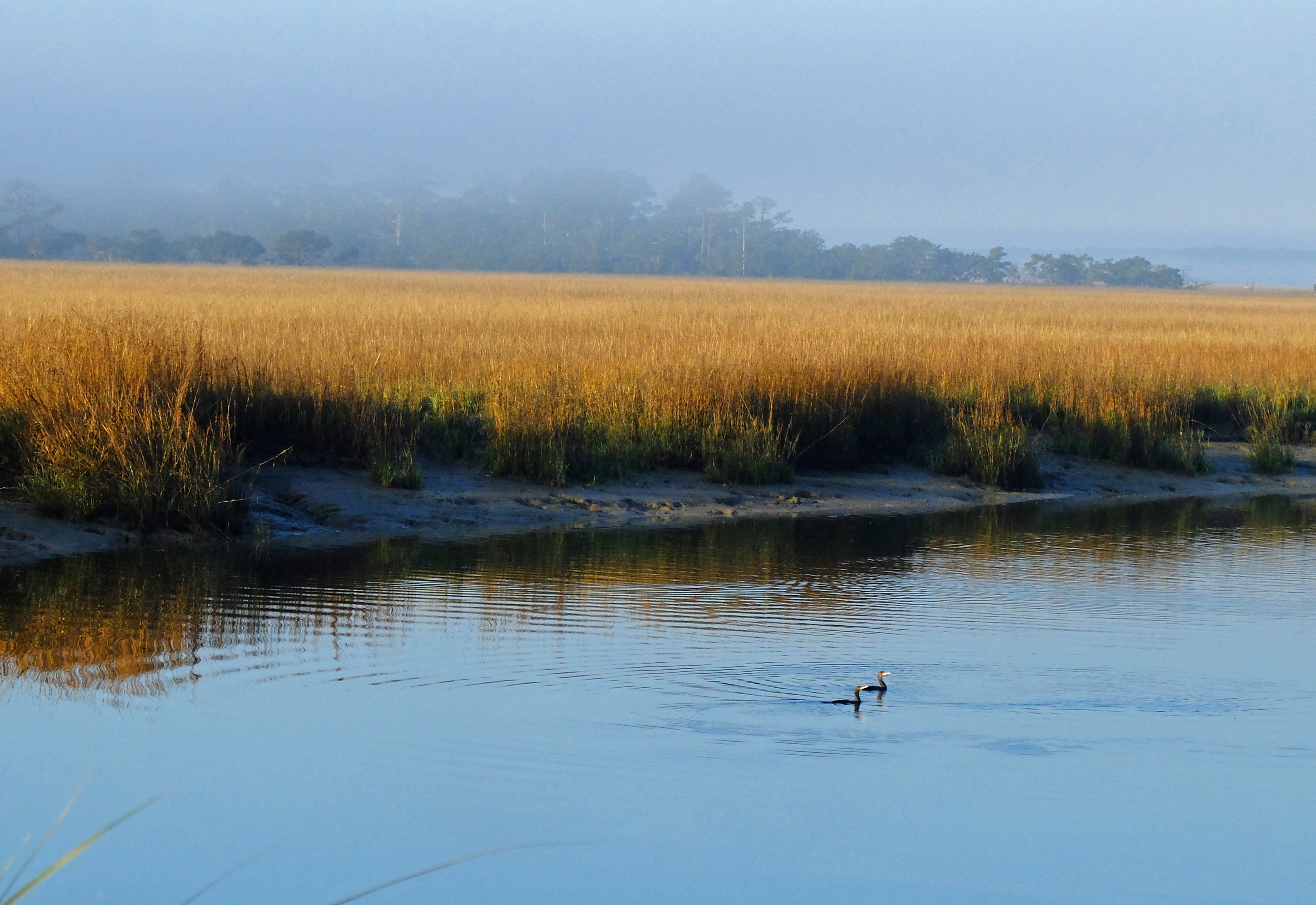 The Baltic Sea has a rather characteristic, elongated shape, ranging approximately 1,300km from north to south and 1,000km from west to east covering an area of 412,560km2 (Gerlach, 1994; Seifert & Kayser 1995). The sea actually lies across climatic zones, covering both maritime temperate zones and continental sub-arctic climate zones (Leppäranta & Myrberg, 2009). That means that different locations throughout the Baltic Sea will experience differing climatic conditions. Since the Baltic Sea reaches into the sub-arctic zone combined with the brackish water, ice is a common occurrence in winter. During the winter months some 40% of the Baltic Sea is covered in ice, with the greatest amount being seen between January and March (Finnish Meteorological Institute, 2017a). 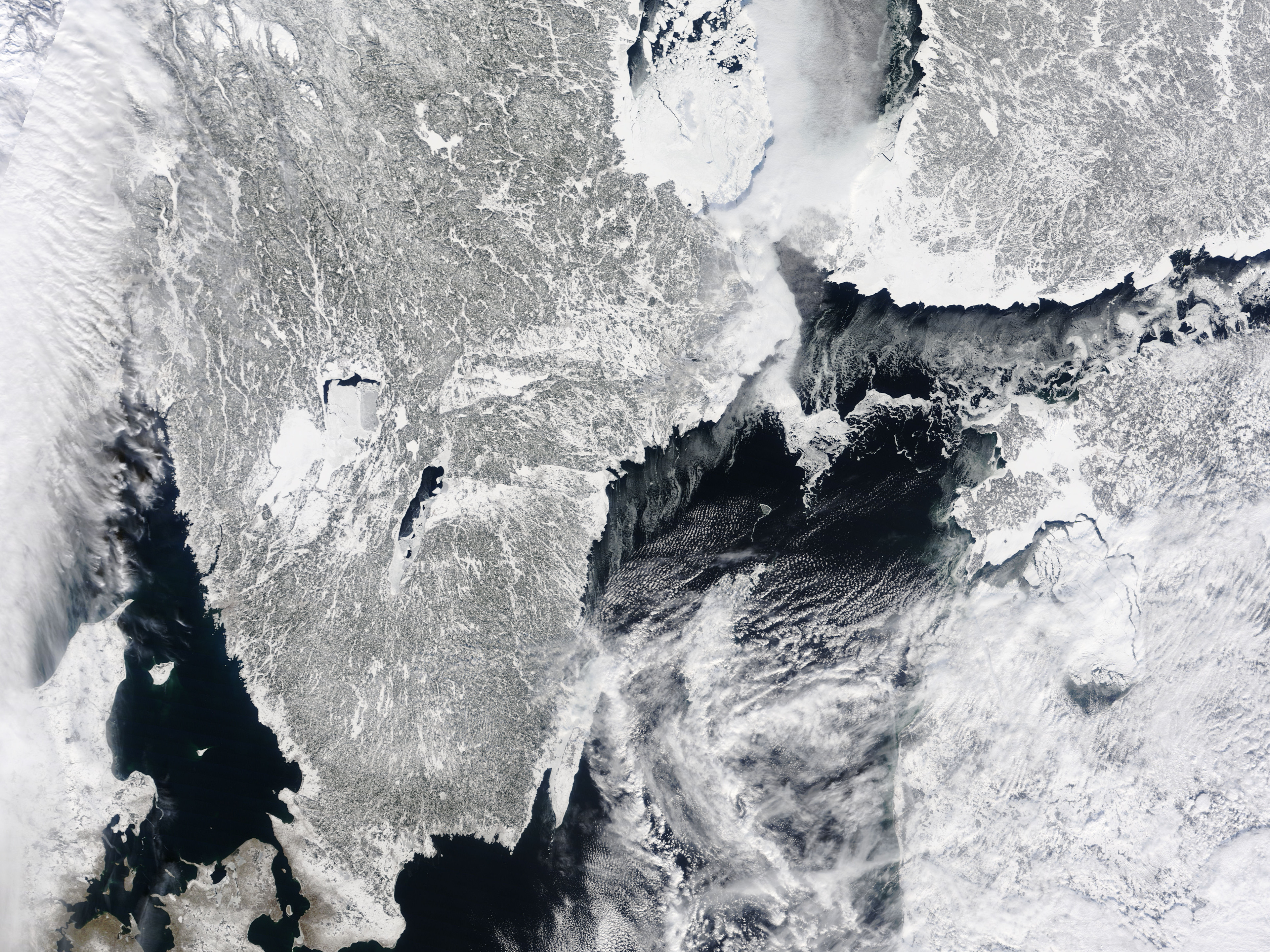 A view of the Baltic Sea from space. Sweden appears on the left and Finland in the upper right. The sea ice envelops the coastal islands with sprinkles of sea ice away from the coast. Credit: NASA image courtesy the MODIS Rapid Response Team at NASA GSFC.

The deepest part of the Baltic Sea is at Landsort Deep in the Baltic Sea Proper, reaching a maximum depth of 459m (Furman et al., 2014). Maybe this sounds pretty deep, but when you compare it to the Atlantic and Pacific Oceans with a maximum depth of 8710m at Milwaukee Deep or ~10900m at Challenger Deep respectively then it seems pretty shallow (Stewart & Jamieson, 2019). In fact the mean depth of the Baltic Sea is a measly 54m, that’s just over the length of an Olympic-size swimming pool (Furman et al., 2014). Moreover much of the Baltic Sea lies well above this depth, with the Gulf of Finland averaging 37m (Kuosa and Myrberg, 2009) and the Gulf of Riga just 27m (Szaniawska, 2018).

Though being inconsequential in the grand scheme of the global oceans, the Baltic Sea has a huge effect on and is also hugely affected by human activities. Nine countries surround the semi-enclosed sea: Denmark, Germany, Poland, Lithuania, Latvia, Estonia, Russia, Finland and Sweden. The sea has been integral in the development of these countries and has supported many a livelihood.

To add to the peculiarity of the Baltic Sea, tides are absent. In the Baltic Sea you will not experience the daily fluctuation of seawater traveling up and down the shore. For plants, animals, and algae living on the shore this means that they are subjected to constant submergence, a very different experience than those outside of the Baltic Sea. Tides are minimal within the Baltic Sea because the body of water body is so small and the influence from the surrounding tides of the Atlantic and North Sea cannot penetrate into the mostly enclosed sea. The absence of tides is actually quite common in enclosed seas, being seen in both the Black and Caspian seas as well (Medvedev et al., 2016). The absence of tides also plays an important part in stabilising the defined salinity gradient. However if you are on the Baltic Sea coast you might notice that the water level does change from time to time. This is not because of the tide but actually due to air pressure, wind conditions, ice cover and the flow of water between the Baltic and North Sea (Finnish Meteorological Institute, 2017b).

So the Baltic Sea is a semi-enclosed, shallow, brackish sea with various climates, no tides, and a low number of species. As a study system this makes it pretty unique, and adds a further complexity to any research we do in this unique sea. As a marine biologist, I am grateful to have the opportunity to work in such a special place!