The total sickness rate of our field course is reaching 50 %. Luckily, we are not getting sick at the same time and there were still more or less healty students ready for today’s exercise. We had prepared maps about human-wildlife conflict in Taita area and we were supposed to interview people who know about the subject and after that, go to city of Voi. However, the day didn’t go entirely as planned.

The morning started with a drive to Voi and to the gate of Tsavo national park. Research center of the park is located inside the park and we were supposed to have a meeting with park staff there. We had to wait for two hours before all the byrocracy was done and we had got the permission to visit the research center. While waiting, we saw a climps of the park’s wildlife including baboons, a squirrel, colourfull lizards and birds. We got the permission to interview a park official in the research center but also got a chance to visit the whole Tsavo park for free. So in addition to the interview and conversations in the research center, we were able to experience Tsavo park with our own eyes on a safari.

Sentence of the day was ” a sandstorm in the eye balls” by Arttu. Driving through the dry sandy savannah by car with windows open means sand everywhere, also in the eyes. Luckily, sun glasses protected our eyes from the worst sandstorm. 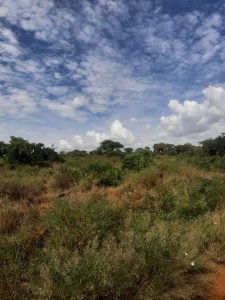 The day was very succesfull despite of the long waiting in the morning. Interview was helpfull and we learned for example that the amount of wildlife conflict varies between years depending on environmental conditions. Our data that we had used when preparing the maps for the exercise didn’t include things such as illegal farming. To get better results about wildlife conflict using GIS analysis, better data would be needed but the results that we had got were still quite close to the reality.

The safari part was also exiting. We saw dikdiks, a secretary bird, zepras, jackals, elephants and many more. After about 70 km driving in the dry savannah we were covered by the red sand as if we had all got a spray tan. When we finally arrived to the park gate there was nobody to open the gate for us. After a short waiting we got out of the park and head back towards the research station. Driving in the dark Mombasa highway is not our favorite thing since the traffic and the style of driving is not something we have got used to. Interesting and exciting day! 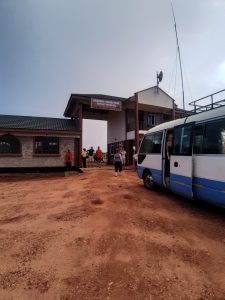