Holy moly what a hike we had! Our original plan was to go up and down by the easy way to Mt. Kasigau but it changed during our breakfast to an interesting and not so easy climb up and slightly easier way down. Even though the way up was long and hard, it was all worth it.

During our hike we learned a lot about nature of Kasigau, its rich vegetation and animals. We even saw a python (at least most of us saw, the ones who weren’t too scared to go and look to the bushes). On the way up we were able to see how the different forrest zones changed and we marked them up to our GPS. One memorable moment for all of us was to climb up on a waterfall while trying to get rid of the safari ants. Clearing up to you, if safari ant bites you, you do not want to experience the same thing again. So when you hear someone yelling “ANTS”, you know what to do: RUN! 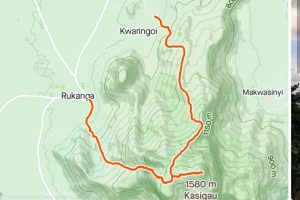 To get to the highest peak of Kasigau it took us 5 hours and to climb down 3,5 hours. The day was cloudy but luckily at the top the sky cleared up for us and showed the Kenian safaris beauty at its best!

If the way up was hard, it was also hard to get down due to slippery muddy paths! We were lucky to only get some minor wounds. Our guide, Emmanuel, told us stories from the World War I and described how Kasigau played an important role on war between Germans and Britons. He showed us couple of trenches. And yes, we blessed the rains down in Africa when it was pouring rain the last 10 minutes of our hike that cleaned us up! When we arrived to the bus, there was a small sisal basket market made just for us by local women. Souvenirs check and hop on to matatu (bus).

Like I told earlier, it was raining. Well, you have never experienced a fear if you haven’t been on a Mombasa highway during a thunderstorm. Thunders were lighting the sky while everyone was holding on their seats when the streets were flooding and horns were honking due to not so safe passes by trucks, Luckily we had Robert the driver, who took us home safely! (Asante Robert)

Hike was an amazing experience so here is a short clip of our amazing day in Kasigau!