In a recent interview, published in the Finnish weekly Image, I discuss the predominant narrative of Helsinki’s current development, which claims to focus on the expansion of the urban centre, very much within the context of a perceived “renaissance of the city”. The main point I want to make in the interview is that, contrary to this focus on a positive tale of vibrant urbanity, current developments in Kalasatama/East Harbour (as well as in Pasila), seem to take, rather, the model of the shopping mall, in a narrative of maximized consumption within private space. One (freely translated) quote: “It’s not so much about having nice storefront cafés where you can drink café latte – it’s about whether we want a city, where it is possible to meet people that think differently and that vote differently, in public space.” 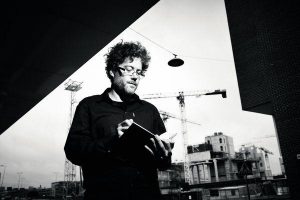 I’ll participate on Friday 9.9. in the panel discussion “Kaupunki – kenen ehdoilla” / “The City – on whose terms?”, organized by the Finnish weekly “Image”, and as part of the Helsinki design week. I’ll be joined by deputy mayor Anni Sinnemäki, Pauliina Seppälä and moderator Niklas Thesslund.

The discussion will take place at the iconic “Three smiths” statue, quite fittingly within a temporarily constructed futuristic dome, starting from 17.30. 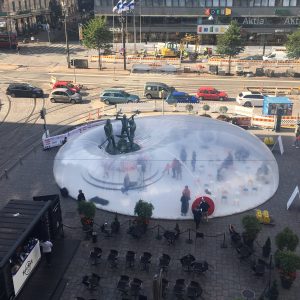 Pressing issues oa: what kind of city do we want for Helsinki, and on whose terms? All relating to my current research on narrative planning.

Out now! My article “A Bildungsroman for a Waterfront Development. Literary genre and the planning narratives of Jätkäsaari, Helsinki”, published in the latest Journal of Urban Cultural Studies. It’s an integral part of my current research in urban planning narratives of Helsinki’s waterfront.
Abstract
This article examines the narratives involved in the planning of Jätkäsaari (Helsinki), an industrial harbour environment currently being redeveloped. It starts out with an analysis of Hyvä jätkä/Good Chap (Hannu Mäkelä, 2009), a literary novel commissioned by the city to promote the area, arguing that this cultural product should not be seen merely as a piece of cultural branding. Rather, the novel’s fictional construction of the area’s past and future draws attention to the narrative characteristics of planning itself. Using the concepts of literary genre and metaphor, an examination of Jätkäsaari’s planning narratives shows the ambivalent and often contradictory planning visions of the area. This study aims at re-examining the considerable research tradition in urban and planning studies that sees urban planning as a form of storytelling, by applying concepts from literary and narrative theory to the analysis of planning narratives.