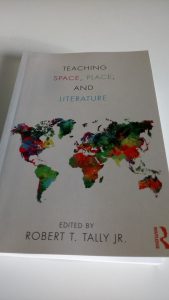 Interesting new volume out now, in the field of spatial humanities: the Routledge volume Teaching Space, Place, and Literature (ed. by Robert T. Tally Jr.). Including my article on teaching the city walk and the panorama. Introduction below.

Thanks to my students of the course “Space, City and Literature” at the University of Tampere, whose assignments and contributions during the course are part of the material discussed in the article.

In an early scene in Sylvia Plath’s The Ball Jar (1971/1988), the protagonist has returned to her hotel room in New York after a confusing outing in the city. Unable to fully open her hotel window on the seventeenth floor, Esther Greenwood tries to get a view of the city where she has only recently arrived:

“By standing at the left side of the window and laying my cheek to the woodwork, I could see downtown to where the UN balanced itself in the dark, like a weird green Martian honeycomb. I could see the moving red and white lights along the drive and the lights of the bridges whose names I didn’t know.

The silence depressed me. It wasn’t the silence of silence. It was my own silence.

The view from above of the city, in this quote, is instructive of several of the effects achieved by the panorama in a city novel. It conveys and thematizes the protago­nist’s uneasiness with the city, her literal inability to hear its sounds, the distance she feels between herself and her surroundings. At the same time, there is also paradoxi­cally a connection since the view of the city resonates with her inner feelings: the total lack of noise in the panorama is literally the protagonist’s own silence. Dis­tance seems also concomitant with a particular kind of figurative language, which

translates concrete spatial features in metaphorical terms, as with “green Martian honeycomb” of the UN building.

Crucial to the panorama is the explicit way in which the perspective is framed – in this case, the extent to which the view is limited, obstructed, and partly closed to the protagonist. In a novel pregnant with forced enclosure, the inability to escape social and moral restrictions is made tangible in the failure to fully open the window, the difficulty, in “laying my cheek to the woodwork” to gain an unrestricted meaning-giving perspective. In drawing attention to its framing, the panorama underlines the artificiality of the view. To Esther, the city appears as a two-dimensional apparition, “flat as a poster.” Artificial to the protagonist, it alerts the reader to the broader constructed nature of the narration: the fact that the view the reader gets of the storyworld and the city within it is carefully framed and composed.

In the city novel, the panorama is a narrative strategy of the first order, often juxtaposed with and complemented by the city walk. In The Bell Jar, the panorama comes immediately after a reference to the protagonist’s long walk back to her hotel, a walk that is presented as much less problematic for the protagonist than the attempt to gain an overview of the city: as the narrator confidently notes: “walking has never fazed me.” Yet the reader learns that she has used a map – a bird’s-eye view of sorts – for her orientation, one indication that a high vantage point and the experience on the street are complementary rather than oppositional, and that the experience of the city oscillates between these two perspectives.

The panorama and the city walker

The city walker in literature, with its roots in the contested figure of the flâneur, and the panorama, with its intimation of a totalization of space, constitute together a crucial pair of hermeneutic approaches to space in the city novel and to the complex relationship between spatial surroundings, the protagonist, and their devel­opment. In this article, they will be taken as key conceptualizations in teaching literary urban studies. I will start out by examining some of the critical secondary literature pertinent to these conceptualizations. These will be complemented by a discussion of practical teaching assignments aimed to enable students to apply theoretical concepts from urban and literary studies to their own experiences of the urban environment, and to take the classroom material into the city.