Out now: “‘A stream of words’ the Antwerp Quay Poem as interrogation of urban open form, polyphony and radical dialogue”, in Textual Practice. The article is published open access here.

The article looks at questions of open and closed urban form by examining Peter Holvoet-Hanssen’s Quay Poem, an in-situ poem painted in 2011 on the floodwalls of the Antwerp quays. 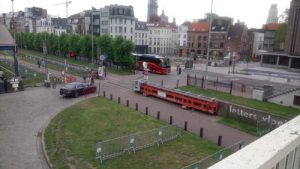 The article is the final part of a triptych of articles I wrote on Low Countries urban flood narratives, with the other articles:

The articles are part of my research project on future visions of cities at the water in planning and fiction.

“This article examines polyphony and open form as key concepts connecting literary theory and urban planning. It focuses on Peter Holvoet-Hanssen’s Quay Poem, an in-situ poem painted in 2011 on the floodwalls of the Antwerp quays during Holvoet-Hanssen’s tenure as city poet. The long poem in public space provides important insights into how literary city texts and the discourses of urban development draw ultimately on similar narrative structures, in close dialogue with past layers of urban meaning and in the shadow of future material transformations. The poem gestures also to insights planning can gain from literary forms of storytelling, in particular in the way Holvoet-Hanssen’s poem produces a remarkable openness of form; in the way it articulates a radical variety of different voices; and in the way it continues to speak after the text itself has disappeared from the public built environment.”

“The Quay Poem was originally commissioned as an act of communication by the planning department of Antwerpen, with the intention that it would be a temporary poem in public space to communicate the redevelopment of the waterfront. But when the destruction of the quay walls on which it was written began, in 2018, the sudden and violent disappearance of parts of the poem took many by surprise. Members of the public had become attached to the poem; Holvoet-Hanssen was dismayed by the fact the demolition began without prior warning or announcement, and lamented the fact that no efforts had been made to preserve some parts of the poem. But the Quay Poem was never merely a one-directional act of communication. In its formal openness, its polyphony, and in how it enacts a radical dialogue with the city’s material environment and its immaterial layers of meaning, it constitutes a powerful and tangible intervention that produces new perspectives on the city, its past, and its future development. It foregrounds formal questions of open and closed form in ways that go at the heart of contemporary discussions about city form and about social and political forms of entrenchment. In its remarkable polyphony and in how it includes unfiltered and contradictory voices of the city, it provides a blueprint for possible polyphony in planning and policy. It enacts a compelling dialogue with other structures in the built environment, with previous experiences of the waterfront, ‘carried on the winds’, and with the palimpsestic remnants of past moments of political contestation. When visited on the ground along the river, it proposes a profound material and physical positioning within urban space, inviting the reader to scale walls, to take new perspectives, even to breach the concrete on which the text is written. Finally, in its ecocritical gestures towards the powerful agency of the river, it questions not only the rationale of floodwalls, old and new, but cuts away at the roots of its own literary materiality.” 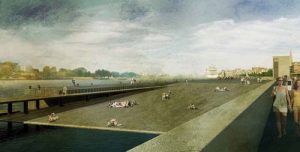 I’m presenting a keynote lecture at Aachen, Germany, at the “Narratives of Body and Mind” conference, a Young Researchers Conference, April 8-9, 2021.

The title of my talk is “Knocking on the Door: Presence in Literature”. 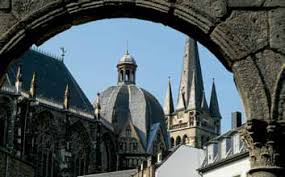 “How is a sense of presence created in literature? And how are presence and embodied memory tied to a reading-for-meaning in the interaction between reader and literary text? I will address these questions by examining instances of fateful knocking on doors, from Plato’s Symposium to Shakespeare’s Macbeth and more recent historical young adult fiction. In my readings, I will draw on enactivist approaches to literary studies, as well as on the work of Thomas De Quincey, James Wood, Hans Ulrich Gumbrecht, and Agneta Kuzmicova.”

“Since the cognitive turn in narrative theory opened up a new research field for literary
studies, new and innovative approaches have been developed in various research areas,
including the study of narrative. Starting from computational models that gave rise to
situational or mental models, to the recent move towards embodied approaches in
cognitive literary studies and empirical research with actual readers, cognitive literary
studies turned into a broad field that lends itself to complex combinations of different
research areas. In this interdisciplinary conference, we examine the various research areas in which narrative theory meets narratives of the body, narratives of the mind or the common ground between them.”

It would’ve been great to come in person to Aachen, hopefully another time!

Many thanks to Kai Tan and her colleagues at Aachen University for the kind invitation.