There is a joke or even misconception among Helsinki-dwellers that there is not much to see or do beyond Kehä III, the ring road furthest from the city centre. But there is indeed a lot more to Finland than just Helsinki! Here we have listed three urban centres worth paying a visit to. Finnish nature deserves a whole other blog entry, so let’s just focus on some cities this time! In this instance, they are all around one to two hours away from Helsinki, which is ideal for a day trip if you want to also save some money and not have to pay for accommodation.

Tampere is sometimes given the nickname “Manchester of Finland” due to its industrial heritage. Have a walk around the so-called Finlayson area, where most of the old, red brick factory buildings are located. If you have a bit of time, go into the Finnish Labour Museum Werstas – admission is free! A museum I have found particularly interesting is the Spy Museum, which is as cool as it sounds: there are lots of gadgets and interesting stories to learn about. And while we’re still on the topic of museums, on May 9th 2017, a Moomin Museum will open in Tampere Hall. It will be the only museum of Moomin art in the world, so it will definitely be worth a visit! 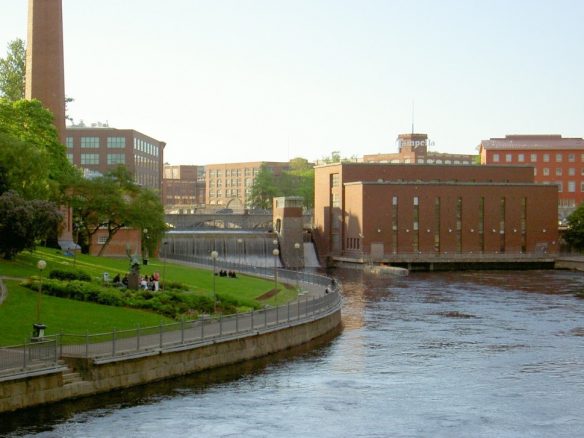 You can get an amazing view from Näsinneula. At over 100 metres high, this observation tower is the second highest one in the Nordic countries. You can see great stretches of lake and forest – up to 20 km away if the weather is clear on the day. If you go there in the summer, the Särkänniemi amusement park, where it is located, will be open, too!

Turku is a vibrant city full of history. Located along the Aura river (Aurajoki in Finnish), it is the oldest city in Finland, and it was the country’s capital city until 1812.

Some interesting museums to pay a visit to include the Pharmaceutical Museum or the Sibelius Museum. However, the two main sights are Turku’s Cathedral, in the East bank, and its Castle, on the West bank. Both are amongst some of the most valuable monuments in Finland: the Cathedral was consecrated in 1300, and the Castle’s construction began in the 1280s.

Something quirky to do is to board the Föri, a tiny ferry used by locals to cross from one riverbank to another. You can also use this chance to have a lovely stroll along the gorgeous riverside!

Also a good choice for those into older cities, Porvoo is a small town just an hour-long bus ride away from Helsinki. The quaintness of Old Porvoo is very popular with tourists. It is quite compact and easy to discover by foot, so have a walk around its picturesque streets while admiring the architecture: small, colourful houses bordering cobblestone streets. Don’t miss the Cathedral, one of the oldest churches in Finland, or the Old Town Hall.

Many small boutiques and shops are tucked away around Old Porvoo, too, so there’s also a perfect opportunity to do a little bit of shopping. And when your feet get tired of exploring, dip into one of Porvoo’s cosy cafés and have a nice coffee, perhaps accompanied with a traditional Runeberg tart.