A new paper out! Study “Identification of ecological networks for land-use planning with spatial conservation prioritization” by Joel Jalkanen, Tuuli Toivonen, and Atte Moilanen has just published a study in the Landscape Ecology journal. In the paper, we describe the work where we identified large well-connected ecological networks and ecological corridors for the Regional Council of Uusimaa, an authority responsible for regional planning in the Uusimaa province in Southern Finland. We used the Zonation spatial prioritization software in a novel way for identifying large well-connected structures, and the rarely-used corridor retention tool in Zonation for identifying ecological corridors. Zonation has been previously used to support regional zoning in Uusimaa, and dozens on layers of biodiversity data was available in the area.

It is quite straightforward to identify local high-priority areas (such as areas of high habitat quality) from Zonation results. In the case of Uusimaa, biodiversity is greatly scattered and concentrated in the top-20% priority areas. Ensuring the regional-level connectivity would be, indeed, highly important. 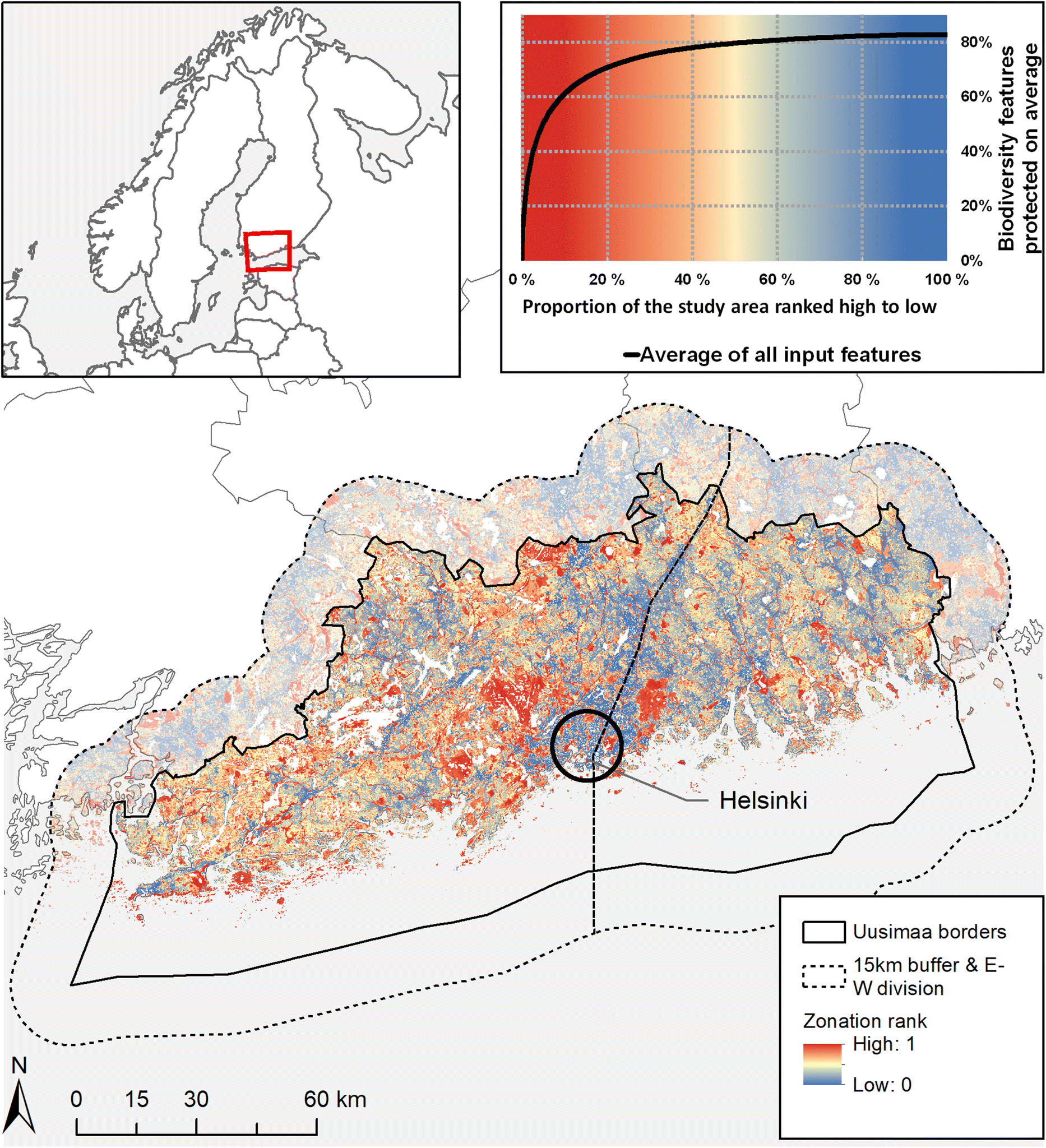 Uusimaa has a strong human influence, and high-priority areas are scattered. Picture from the article.

Ecological networks are more than just core patches and links in-between them. Connectivity essentially means variation of habitat quality in space: some parts of the landscape can be optimal for reproduction, other parts support dispersal but no reproduction, and some parts are more or less useless or hostile for given species. In human-modified landscapes (such as Uusimaa), human activities can be considered to decrease local habitat quality so much that some parts of the landscape hardly support even dispersal of the species at large. Therefore, instead of drawing links between top-priority patches, we wanted to see where the matrix around the top-priority patches has sufficient habitat quality so that supports biodiversity in general. The question then is how to separate those parts of the landscape that are so human-influenced and low in habitat quality that they do not support regional connectivity from Zonation results. As we all know, Zonation priority rank is always a map with linear values from 0.0 to 1.0, and the map itself does not tell whether it is the highest 20, 50, or 80% of the landscape that is relevant for biodiversity at large.

To answer that problem, we combined the two spatial outputs of Zonation: traditional rank map and the weighted range-size corrected richness map (WRSCR) that describes the richness of habitats and species in Uusimaa. Compared to the rank map, WRSCR map tells where there are no biodiversity values. However, WRSCR does not include any kind of complementarity element unlike the rank map. Thus, spatial combination of the two maps allowed us to identify large structures where there are much biodiversity and high-priority areas and that are separated by more degraded parts of the landscape. Those structures are the large-scale ecological networks in the region. 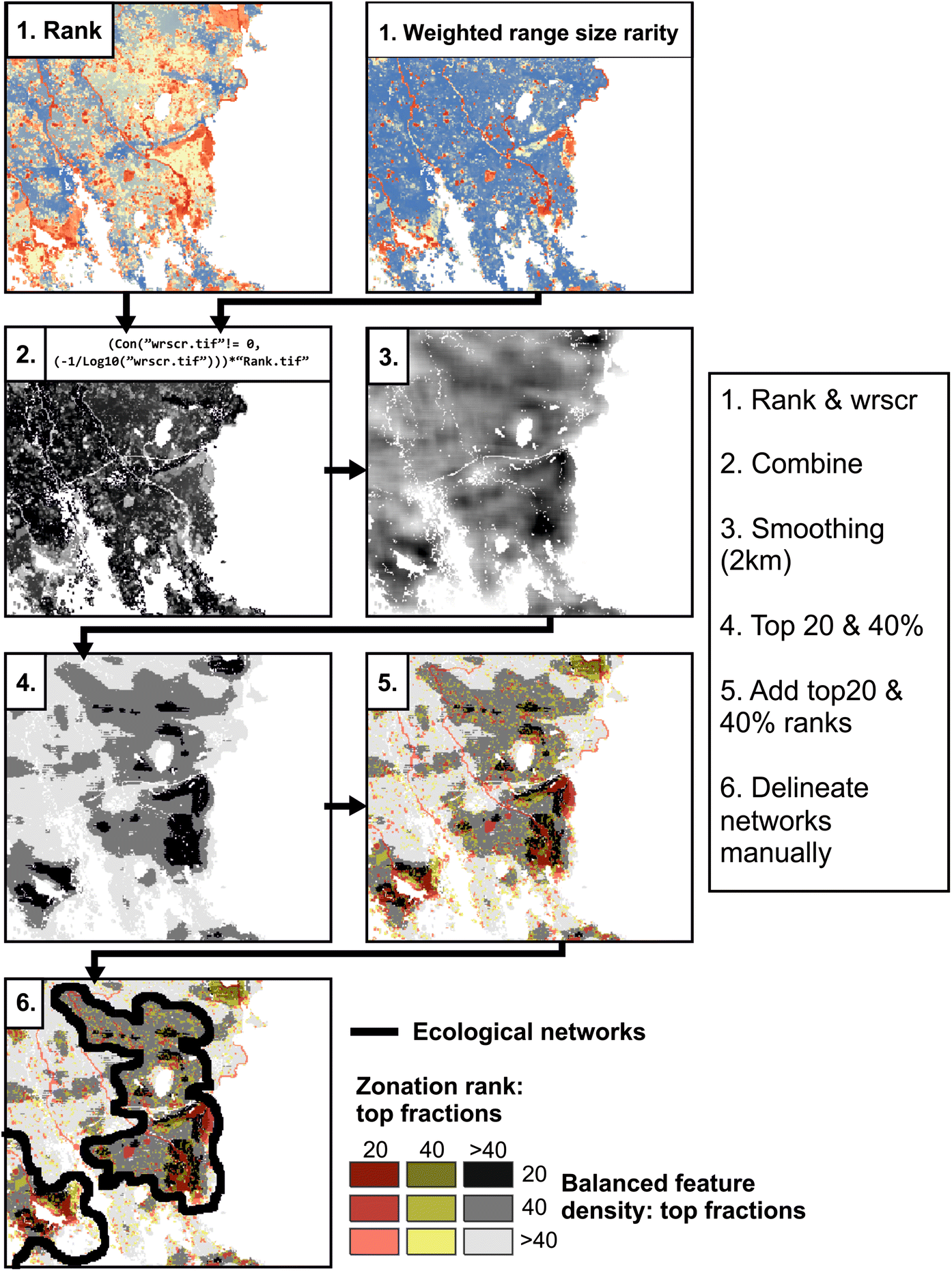 Workflow for identifying networks from Zonation outputs. Picture from the article.

Seven large ecological networks in Uusimaa. Picture based on the original Finnish report.

We used the corridor retention tool of Zonation to identify ecological corridors that combine large connected structures via human-modified parts of the landscape. The interpretation of the corridors is that they act as bottlenecks in-between well-connected landscapes. Those bottlenecks should not be narrowed.

Ecological corridors are connectivity bottlenecks between e.g. large networks. Picture from the article.

We express our gratitude to the Regional Council of Uusimaa for their support and interest in developing the use of spatial prioritization and Zonation in regional land-use planning in Finland! Our history of fruitful collaboration already goes back for many years.