This is a re-post from JSS Editor’s Selection on Medium. Read the original post from here.

The contemporary computing environment has shifted from single node computing to increasingly distributed computing as the number of interconnected devices has grown. Despite of this shift in the computing paradigm, the way we think about software has not dramatically changed over the time: Software application is yet considered to be solely executed by a single entity at the time — one entity possibly coordinating the others.

The interconnected entities can together be considered as the runtime environment.

With our novel concept of Collective Executions we have taken the first steps towards new kind of computing paradigm and programming model where multiple devices dynamically, at the same time form the runtime environment where multiple devices are at the same time executing the same piece of software. The devices — as well as other entities, like humans and services — are then assigned to certain roles in the execution. Underneath a novel framework takes care of forming this runtime that enables such collective software execution by taking care of things like state synchronization, device coordination etc.

Coalescence and disintegration — Novel way of thinking the application state

In the very core of this model is the concept of coalescence and disintegration. In physics, these concepts describe the phenomena where two water drops merge into each other, or split. The analogy in our approach is that the software instances running on different entities can be merged as well into one instance. Then the state synchronization between the newly joined devices begins. Similarly, when disintegration takes place, the state synchronization ends. 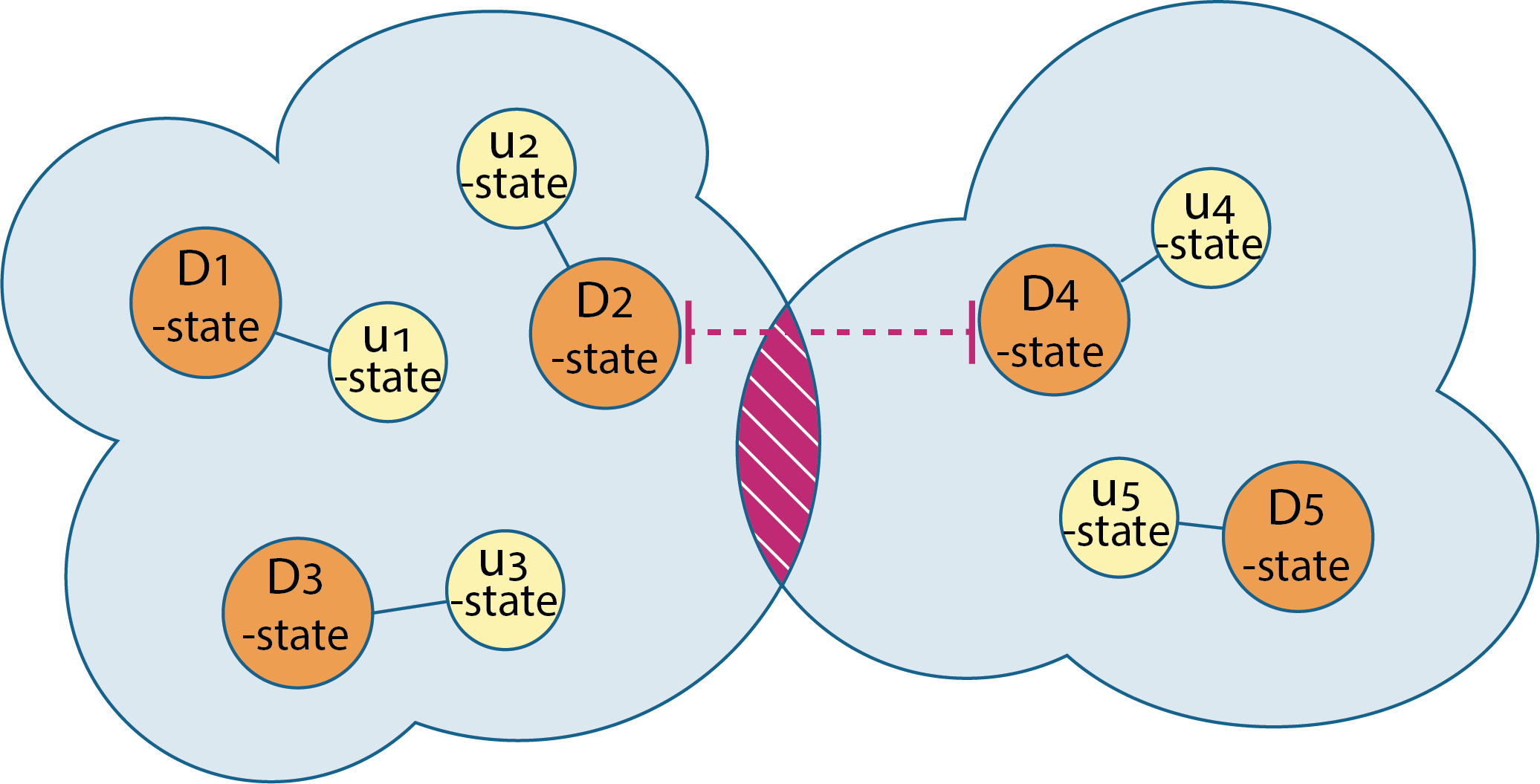 The distance can also be measured in the virtual world, where today common interests connect millions of people: People liking the same video game trailers could then jointly start a multiple player game.

Where p and q are the instances of the Collective Execution E and dist is their mutual distance along the dimension of i. As the value of the distance is the maximum, it is the so-called Chebyshev distance between the instances.

To illustrate how the Collective Executions work in practice, let’s consider the following PhotoSharing example: A group of people has gathered together. The group consists of friends and family members, so the distance in the social world is short. This can act as a trigger that their PhotoSharing executions are enabled to coalescence.

From the user’s perspective, the idea of the PhotoSharing is to initiate discussion among the people that have gathered together. Hence while the PhotoSharing is running, it also notices that the physical distance is under the threshold value that is being used for proactively suggest viewing their most recent and previously un-shared photos related to specific topic, like recent trips to abroad or family life for instance. (Common interests, distance in the virtual world). The Collective Execution then forms the state by synchronizing the unseen photos and the currently shown photo among the participating devices. One device at the time acts as a coordinator and coordinates the other to show certain photo. Other devices act as screens, showing the same selected photo at the same time. This has been depicted in Figure 2. 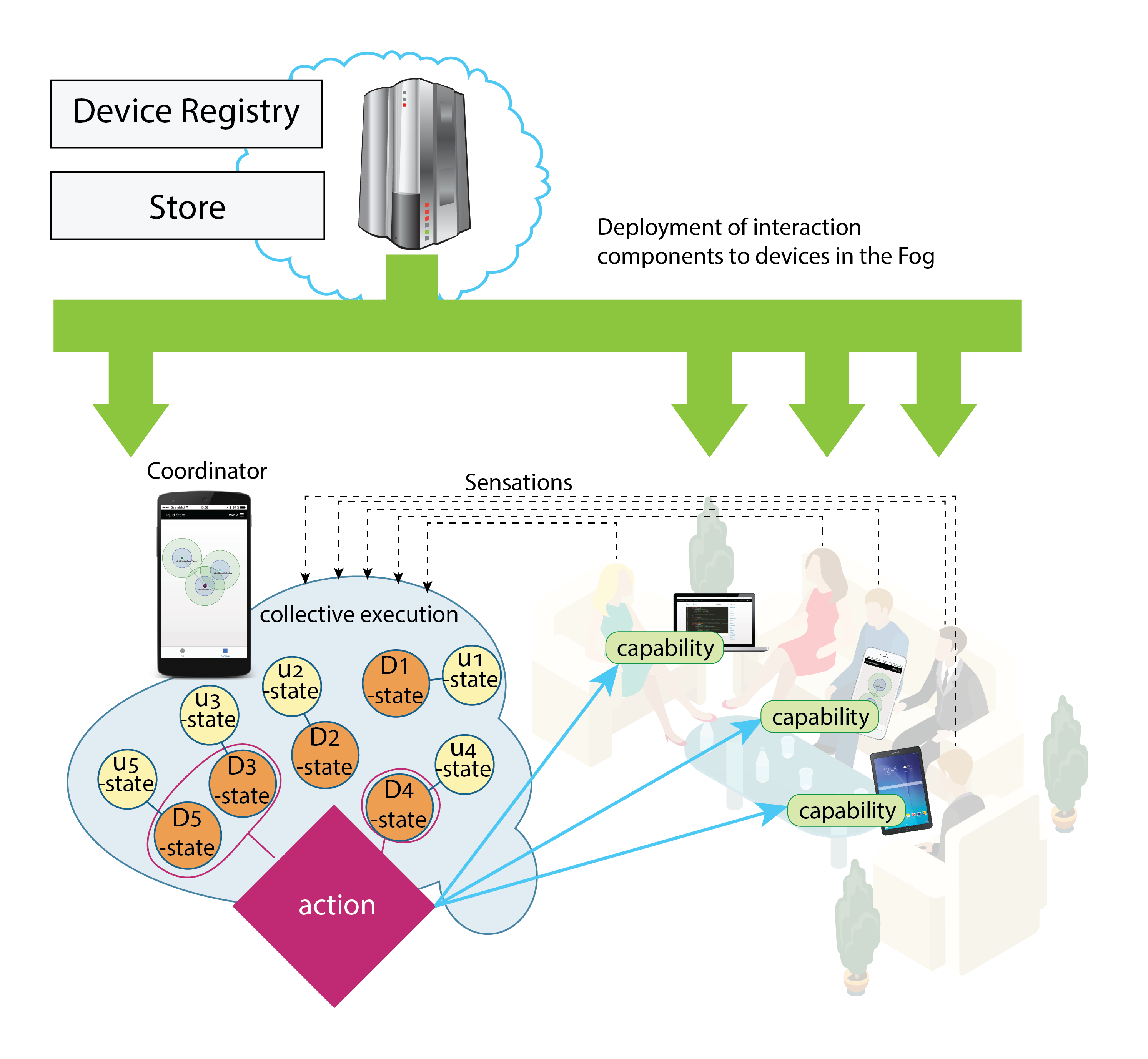 It’s obvious, that there are numerous privacy and security concerns in such proactive approach. Hence plenty of research would be required for instance to make sure that no personal and intimate data will leak into wrong hands. Also, user experience perspective on the security should not be overlooked to make sure that the users a) understand how and by whom their data is being used, and b) not to burden the user with constant interruptions for regarding the data usage or proactive invocation of the activities.

This blog post is based on our articles in JSS and IEEE Software that we from the department of Computer Science, University of Helsinki, Finland have co-authored with our colleagues at the departments of Electronics and Communications Engineering and Pervasive Computing, Tampere University, Finland.

Originally published in the 4APIs project blog on the 24th of August 2020, https://4apis.fi/blog/

The best-known applications of blockchain technology are cryptocurrencies, but there is considerable interest in applying blockchains as a data storage method in various different fields. Blockchains can be used to record transactions in a reliable, secure and immutable manner. Transactions are saved to linked blocks that form a digital, encrypted ledger. Each party or node in a blockchain maintains a copy of this immutable ledger. Consensus among the parties is achieved by using, for example, proof-of-work.

Blockchains can be used to eliminate the need for trust among the parties sending transactions to each other. All transactions are visible in the distributed ledger and tampering the transaction history would require the malicious party taking control of the majority (51%) of the blockchain network’s mining hash rate.

There are several different platforms for building permissioned, private blockchains. Some of the most widely used are Hyperledger [2] and R3’s Corda [3]. Private blockchains are meant to allow saving sensitive data to a blockchain so that only selected parties are able to view it. However, it is possible to save encrypted, private data also to a public blockchain.

Since public blockchains use computationally more expensive consensus protocols and have more nodes, private blockchains can potentially offer better scalability and faster transactions. However, private blockchains are not truly decentralized and, for example, Hyperledger Fabric was found at least in 2019 to have issues with network delays causing desynchronization in the blockchain [4].

There has been a lot of interest in the possibilities of blockchain technology, and hopes of revolutions in many different areas such as finance and Internet of Things (IoT). Blockchains can provide secure ways to manage confidential data and identity information, and thus provide potential use cases also in health care.

However, so far there are only a few fully operational blockchains besides systems related to cryptocurrencies and Bitcoin [5] remains the most successful real-world application of blockchain technology.

Ethereum was the first blockchain to support the implementation of smart contracts, which enable building decentralized applications (dapps) on Ethereum blockchain. There are various potential use cases for dapps and plenty of tutorials on dapp development available online. Despite this, most dapps have practically no users or transactions. On 9th of June 2020 on DappRadar [6], the list of Ethereum dapps showed over 1880 dapps, but only 330 had had at least one user during the previous seven days. All Top Ten dapps (based on user count during the previous seven days), save one, were related to money exchange, high risk investments and decentralized finance. There are some gaming applications on Ethereum (e.g. CryptoKitties, My Crypto Heroes), but most dapps appear to be related to finances and gambling.

In Deloitte’s Global Blockchain survey 2019, 53% of organizations saw blockchains as critical and being in top five of their priorities [7]. In the same survey one of the top five “organizational barriers to greater investment in blockchain technology” was the lack of in-house capabilities. As the need for blockchain professionals is likely to grow in the future, in Finland a project has been launched to provide education on blockchain technology in universities [8].

Supply chains are one area where the use of blockchain technology can potentially streamline the process and reduce paperwork besides creating a transparent, immutable record of the product history. However, Gartner’s report (2019) estimates that “contrary to initial market hype and for the time being, blockchain is not enabling a major digital business revolution, and may not enable one until at least 2028” [9]. This is due to several factors that currently make it challenging for organisations to adopt blockchain technology.

In a blockchain system, there is overhead from replicating the data. For example, in Ethereum, those users that host the full node need approximately 180 GB disk space [10]. However, not all users need to download the full node, as there are also light nodes that store only the transaction headers and are able to request other information from full nodes. Light nodes can be used, for example, in mobile phones or embedded devices.

For instance, Peker et al. (2020) studied the cost of saving IoT sensor data to Ethereum blockchain. In their experiment the cost of storing 6000 data points (256-bit integers) was approximately 335 – 467 US dollars depending on the method used [11]. According to other informal estimates, the cost of storing 1kB of data to Ethereum blockchain would have been approximately 1.6 US dollars in 2018, and the storage of 1GB was over 1.6 million US dollars. According to Kumar et al. (2020) “the cost of storage on a public blockchain platform can be staggering, a few thousand times higher than on a distributed database system or in the cloud. On a permissioned blockchain system, the cost is likely to be less but still one or two orders of magnitude higher.” [12]

Due to mining being computationally expensive, public blockchain systems consume more energy than regular distributed databases. Bitcoin mining is notoriously energy consuming, and sustainability issues are one area where more research is needed. The popularity of Bitcoin and other cryptocurrencies has also led to different scams related to cryptocurrencies, and for example, infected websites harnessing visitors’ computers to mine Bitcoin.

In their article Kumar et al. (2020) suggest that “blockchain technology should be deployed selectively, mainly for interorganizational transactions among untrusted parties, and in applications that need high levels of provenance and visibility.” For example, tracking the origin and shipping of precious gemstones or other expensive or critical commodities is one area where blockchain systems have been trialled. Regarding supply chains, major challenges for using blockchains include creating legislation and standards all parties can agree on, and getting everyone to use blockchain technology despite additional costs. Joining a consortium is usually necessary to properly utilize blockchains.

To conclude, as blockchains are today a high-cost and high-overhead storage method, careful consideration is needed to determine the proper use cases. Also, a decision should be made on what data to store to the blockchain, as it might be feasible to store only the most critical parts of the whole data to save resources. Blockchain technology is being piloted in various different fields, and in the future, blockchains are likely to be utilized in a much wider scale.

[9] Gartner 2019: Blockchain Unraveled: Determining Its Suitability for Your Organization https://www.gartner.com/en/doc/3913807-blockchain-unraveled-determining-its-suitability-for-your-organization