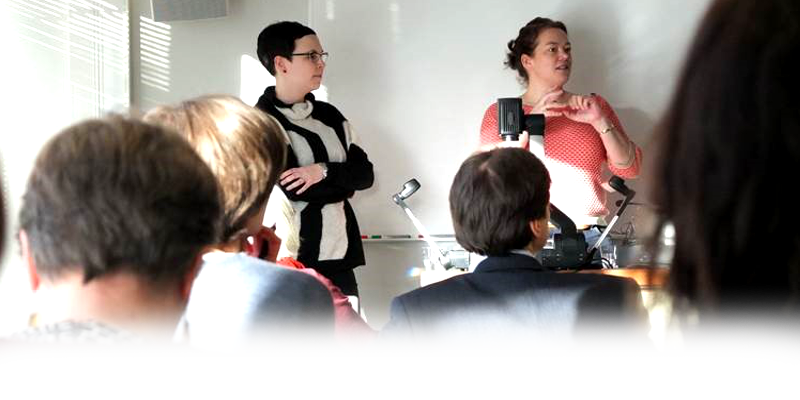 The CoE arranges internal Work-in-Progress seminars where ongoing research is presented. In addition, various perspectives to intersubjectivity are discussed.

Next, professor Anssi Peräkylä presented his thoughts for his future research plan with the title Facing narcissism: grandiosity and vulnerability of the self in the social world. He hopes that the outcome would be for example increased understanding of personality disorders and interactional dysfunctions.

Professor Marja-Leena Sorjonen closed the seminar with the title On the temporal flexibility of progress. She presented interaction in fiction with examples from the Finnish TV series Raid among other things. Sorjonen wanted to emphasize that we all have all kinds of works in progress and one should let them flourish.

November 3rd, 2017 Lindholm & Stevanovic, Khachaturyan, Harjunpää & Svinhufvud
WIP SEMINAR
Camilla Lindholm and Melisa Stevanovic introduced their new project Interaction, social inclusion and mental illness in Work in Progress seminar in November. Lindholm and Stevanovic search for solutions to the problem of modern societies: people with mental illness are unnecessary disadvantaged due to several problems of social interaction. The aim of the project is to create both academic and practical products.

Masha Khachaturyan dealt with deictic means connected to recognition in her talk Recognitional deixis in interaction: Between context presupposing and context creating. First, she presented theory of deixis and then demonstrated the subject with two demonstratives in mano language.

The second speaker was Pentti Henttonen who talked about Experimental investigations of ambivalent storytelling. He discussed about cognitive ambivalence, how ambivalence is measured and can we feel concurrent positive and negative affect.

The last speaker was Jarkko Niemi, who talked about his study with the title Building customer trust in business-to-business sales interaction. His study suggests that certain salesperson techniques lead to greater customer trust regardless of the salesperson company brand recognition.

September 22nd, 2017 Vranjes, Guxholli, Simonen
WIP SEMINAR
Visiting Ph.D. student Jelena Vranjes from University of Leuven opened the WiP seminar by speaking about Interaction management in interpreter mediated talk. With nine authentic interpreter mediated talks as data, Vranjes is focusing on the role of gaze in interaction. She uses mobile eye trackers to follow the gaze shifts of the participants.

Next, Ph.D. student at the Center of Excellence, Aurora Guxholli, spoke about Therapist’s non responses to patient’s emotional talk and empathy in psychotherapy. Guxholli discussed how universal empathy is, and if there are social and cultural implications that influence the expression of empathy. Her case study included the practice of psychotherapy in Albania. Guxholli uses both conversation analysis and ethnography as well as interviews as research methods.

The last one to present was Mika Simonen, a postdoctoral researcher at the Centre of Excellence. His recent four-year research project is titled Greetings in dog-human interaction. Simonen presented video material from canine genetic research’s fearfulness study and talked about how dogs are active participants in human interaction. With the video material he showed how greetings between humans and dogs are emotionally heightened moments for the dogs and talked about how greetings are inter-specific rituals.

March 3rd, 2017 Kurhila, Raevaara, Svinhufvud, Harjunpää, Mondada
WIP SEMINAR
Salla Kurhila started March’s WiP seminar by giving a talk on CA and language learning – LanCook as an example. On Kurhila’s data L2 speakers cook following the computer’s instructions. The instructions are given in Finnish. In her research Kurhila focuses on how language is learned by doing some other activity (cooking) than studying the language.

Daria Bahtina-Jantsikene gave a talk on Establishing common ground in multilingual interaction: the role of meta-communicative strategies and effects of familiarity. She focused on outlining how common ground is built when many languages are spoken in the conversation and when the participants try, for example, to solve a task.

Lorenza Mondada presented her research on Multiple temporalities of language and body interaction. She dealt with multimodal, non-verbal transcription. Mondada illustrated her presentation for example by showing how to transcribe the behavior of apes.