Helsinki Lectures on Intersubjectivity is a series of lectures organized by the CoE. The lecture series consists of guest lecturers from different fields of research discussing intersubjectivity from the point of view of their own field. The lectures are in English and open to all. Welcome!
FORTHCOMING LECTURES

The lecture series has ended.

The very final Helsinki Lecture on Intersubjectivity presenter was professor Anna Mauranen from the University of Helsinki. She talked under the title of Matching perspectives: joint processing across languages and speakers. Mauranen presented how it’s typical for humans to collaborate not only for practical tasks but also for constructing understanding and evaluation of states of affairs.

Mauranen dealt with jointly constructed meanings and matching perspectives across languages and in the academic context. At the end of the talk she questioned whether it is always relevant who of the interlocutors produces the utterance if the meaning is constructed in co-operation.
Download the abstract

3.11.2017 SPENCER HAZEL
READING ONE ANOTHER – INTERSUBJECTIVITY AND THE CONSTRAINTS OF ORTHODOXY
Dr. Spencer Hazel from Newcastle University gave a talk with the title Reading one another – intersubjectivity and the constrains of orthodoxy at the beginning of November. He wanted to present some of the reasons behind how we represent and theorize face to face interaction: there is a long history how interaction is represented in the form of dialogue and from the linguistic point of view, and for example movements and gestures have been put aside. With examples from interactional data from range of settings, Hazel argued that if we are really interested in interaction, we may continue to do ourselves a disservice if we do not wrest ourselves from one heuristic technique developed initially to deal with a more limited set of social interactional phenomena. Hazel’s lecture awakened lively discussion about the methodology of conversation analysis.
Download the abstract
6.10.2017 SAMI PIHLSTRÖM
SOLIPSISM AND THE POSSIBILITY OF INTERSUBJECTIVITY
Professor of philosophy of religion Sami Pihlström (University of Helsinki) talked in October about Solipsism and the Possibility of Intersubjectivity. According to Pihlström solipsism is a fundamental issue in intersubjectivity. He introduced different types of solipsism, however concentrating on transcendental solipsism and the work of Ludwig Wittgenstein related to this. Drawing from Wittgensteins work, Pihlström connected the concept of solipsism with issues in intersubjectivity.
22.9.2017 ANJA STUKENBROCK
FROM NOTICINGS TO EXTENDED SEQUENCES: EXPLORING JOINT ATTENTION WITH MOBILE EYE TRACKING
Professor Anja Stukenbrock from University of Lausanne gave the first lecture of the autumn 2017 in the series Helsinki Lectures on Intersubjectivity with the title From noticings to extended sequences: exploring joint attention with mobile eye tracking. In her study she used eye tracking glasses, which show exactly what a person is looking at. Stukenbrock demonstrated with multiple recorded examples from a market, how gaze practices are used by participants in concert with verbal and other embodied resources to share visual attention on visible phenomena in their surroundings.
Download the abstract
5.5.2017 MIA HALONEN
PERFORMANCE AS ANALYSIS AND REPRODUCTION OF EPISTEMIC COMMON GROUND
Docent Mia Halonen from Jyväskylä University lectured about intersubjectivity in May with the title Performance as analysis and reproduction of epistemic common ground. Halonen presented interaction research through the concept performance. She demonstrated this point of view with the help of empiric data from three different studies that included material from television programs, social media spaces and elementary schools.
Download the abstract (pdf)
4.7.2017 RISTO SAARINEN
INTERSUBJECTIVITIES IN RELIGIOUS RECOGNITION
Professor of Ecumenics Risto Saarinen is the director of the Centre of Excellence in Reason and Religious Recognition. On April, he gave a lecture on the recent activities of the CoE and focused on issues of intersubjectivity. Saarinen dealt with religious recognition connected, for example, to immigration and same-sex marriages. According to him, multicultural societies need not only toleration but also recognition to flourish.
Download the abstract (pdf)
3.3.2017 KAISA KOSKINEN
TRANSLATION AND AFFECT
Professor of translation studies Kaisa Koskinen (University of Tampere) gave a talk on Translation and affect in the lecture series Helsinki Lectures on Intersubjectivity at the beginning of March. Koskinen presented an overview of how affect has been perceived in translation studies in the long run. She also focused on today’s translation studies and gave examples of how affect and emotion manifest in practical translation and how they are studied in translation studies.
3.2.2017 AXEL FLEISCH
MAKING SENSE AND DOCUMENTING MEANING: SEMANTIC FIELDWORK ON seNDEBELE AND isiNDEBELE

Professor Alex Fleisch (African studies, University of Helsinki) gave the first lecture of the spring 2016 in the series Helsinki Lectures on Intersubjectivity. Fleisch is interested in how meaning gets into language. The title of his talk was Making sense and documenting meaning: semantic fieldwork on seNdebele and isiNdebele. The talk illustrated Fleisch’s research group’s methodological and technical approach with examples from their field work in South Africa. The languages that Fleisch spoke about (seNdebele and isiNdebele) are similar to one another. Fleisch introduced linguistic features that are shared and not shared in these languages.

2.12.2016 MINNA PALANDER-COLLIN
TRACING SOCIETAL CHANGE THROUGH LINGUISTIC SHIFTS
Professor Minna Palander-Collin gave a talk on Tracing Societal Change Through Linguistic Shifts on December. This was the year’s last lecture in the lecture series Helsinki Lectures on Intersubjectivity. Palander-Collin talked about her new and previous research projects. She and her research group have used for example corpus methods in their research on the fields of sociolinguistics and social history. She is interested in how changes in language practices and social factors are interrelated and how this relationship can be operationalized in research.
4.11.2016 SIMONA PEKAREK-DOEHLER
EPISTEMICS AND THE BODY: TURN-INITIAL AND TURN-FINAL USES OF ‘JE SAIS PAS’ (‘I DON’T KNOW’) IN FRENCH TALK-IN-INTERACTION

Professor Simona Pekarek-Doehler (University of Neuchâtel) gave a talk on Epistemics and the body: Turn-initial and turn-final uses of je sais pas ’I don’t know’ in French talk-in-interaction as a part of the lecture series Helsinki Lectures on Intersubjectivity. Pekarek-Doehler dealt with the functions of je sais pas positioned at the beginning and at the end of a turn.

Pekarek-Doehler studies turn-initial je sais pas expressions in responses to questions and in turn-extension or turn-final expressions in sequence-initiating actions. The function of the expression depends on how it is positioned. 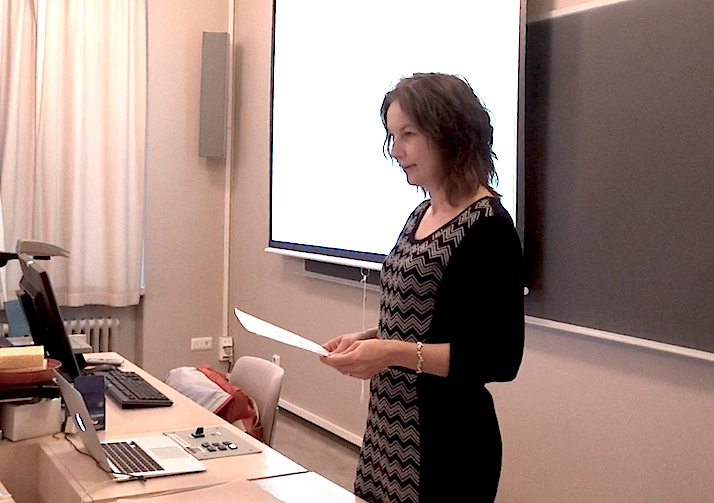 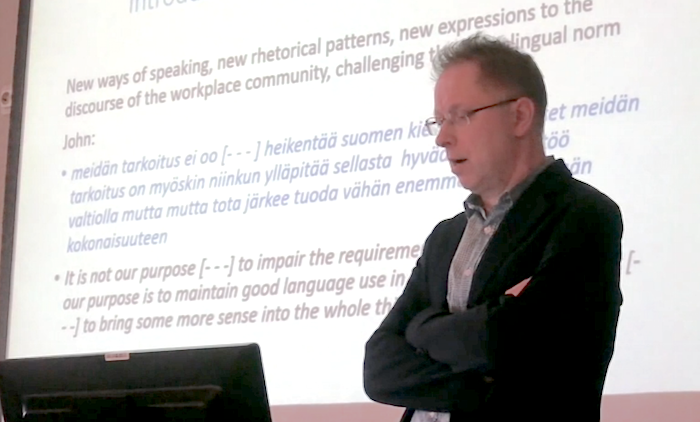 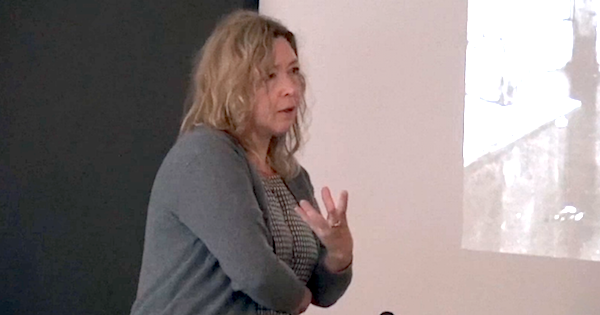 Professor Riikka Stewen (University of the Arts, Helsinki) was the first lecturer of the autumn 2015 in the series ‘Helsinki Lectures on Intersubjectivity’. The topic of the talk was Intersubjectivity in Art History: Addressing the Viewer. Stewen approached the notion of intersubjectivity from a perspective of art history. She showed pictures of both paintings of the Reneissance and installations of contemporary art, and illustrated how an interaction between the artwork, the artist and the viewer is constructed.
Stewen brought up that especially contemporary artists are interested in everyday encounters. The coverage and the effect of art is not limited to galleries but viewers can find themselves in the middle of an artwork e.g. in a street. Stewen reflected also how social and cultural background has an effect to the viewer’s observations about the artwork. She gave as an example Yoko Ono’s work Cut Piece (1965). The interpretations of the artwork vary according to the contexts. In Japan the artwork is associated with the victims of the atomic bomb in Hiroshima and in the USA it’s been connected to the feminism.
Watch lecture in Flamma
8.5.2015 ROSE McCABE
Empirical Correlates of Intersubjectivity in Interaction: What are the Symptoms? 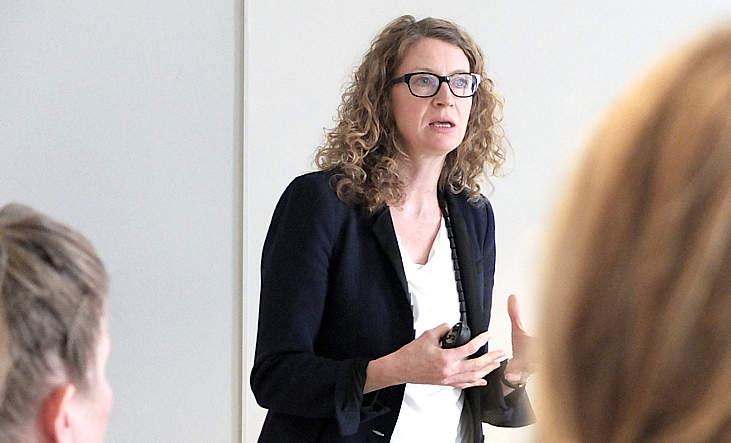 Professor Rose McCabe (University of Exeter) continued the series Helsinki Lectures on Intersubjectivity with a talk titled Empirical Correlates of Intersubjectivity in Interaction: What are the Symptoms? McCabe is professor of Clinical Communication and she is one of the few scholars who combine a C.A. approach with a variety of highly technically advanced methods such as 3d motion capture and computational linguistics. In her lecture she presented some verbal and non-verbal mechanisms that can help improve the relationship between doctor and patient in psychiatric treatment. In particular she focused on the role of questioning and on how different attitudes can be displayed through different question types. Moreover, she introduced some practices that can be used to help doctors improve their interpersonal skills. 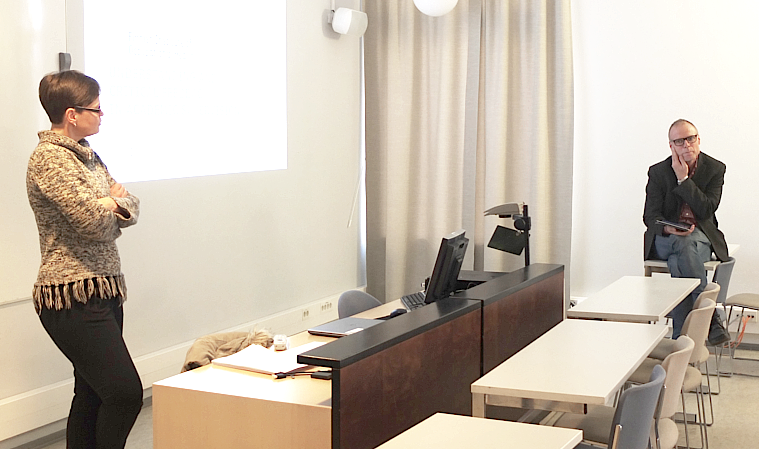 Docent Sanna Vehviläinen (Finnish Institute of Occupational Health) gave the second intersubjectivity lecture of the spring 2015 titled Understanding and critical feedback in academic supervision.Vehviläinen started the lecture by going through some of the literature on understanding in different fields. She introduced for example the idea of the separation of two aspects of understanding: claiming and demonstrating.
In Vehviläinen’s own data this separation of claiming and demonstrating came up in an interesting way. She showed a case example of a discussion in academic supervision where the supervisor gave some critical feedback to the student concerning central issues in the student’s dissertation. The student’s response to the feedback revealed some underlining problems in understanding. Vehviläinen asked whether there is something in the interaction that intensifies and escalates the problems and causes the supervisor to repeate his/her negative feedback.
6.2.2015 PETER AUER
Interaction with People Suffering of Severe Cerebral Palsy Who Use a Computer to ’Speak’ 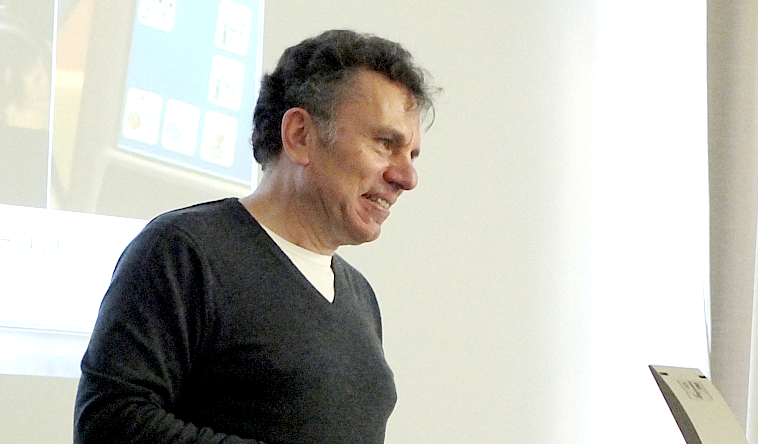 Professor Peter Auer (University of Freiburg) gave the first lecture of the spring 2015 in the series Helsinki Lectures on Intersubjectivity. The lecture was titled Establishing intersubjectivity when it seems unlikely: Interaction with people suffering of severe cerebral palsy who use a computer to ‘speak’. At the beginning of his lecture Auer compared some traditional theories of intersubjectivity with a new approach, in which intersubjectivity is treated as constructed moment-to-moment instead of something cognitive and static.
Auer talked about how interaction between people is affected when one of the participants uses a computer as a communication aid. He has done research on people who suffer from cerebral palsy and who use a computer to communicate. Auer presented his data and made observations on how the other participant of the conversation can orientate either to the device or to the participant using the device. According to Auer especially embodiment and bodily movements become relevant in these kinds of situations because participants use them to create intersubjectivity via mutual incorporation.
Year 2012-2014 lectures in the archive:
2014
2013
2012