“I’ve been given the opportunity to do so many things. The best thing about my traineeship was its diversity, close cooperation with all teachers of German and the fact that my opinions and ideas were valued and taken into account right from the start,” says Rike Fröhlich, who completed a traineeship at the Language Centre. 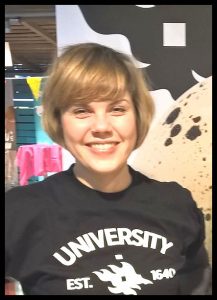 Rike came to the Language Centre’s German unit from Berlin for a traineeship funded by Erasmus+ in spring 2016.

She was already familiar with the Language Centre and the University of Helsinki, having spent the previous autumn term in Helsinki as an exchange student and serving as an active course assistant in German at the Language Centre. Rike enjoyed her exchange so much that she decided to continue her studies with a traineeship.

“I enjoyed my stay in Helsinki and working as a course assistant in German so much that when I applied for an Erasmus+ grant for a traineeship, I immediately knew that the Language Centre would be the first place I would contact,” Rike explains.

During her traineeship, Rike assisted German teachers in teaching-related duties by participating in German courses and supporting students who were learning German. The courses were quite dissimilar and aimed at students of various skills levels. “It was great to be involved in so many different activities and see such different styles of teaching,” Rike says.

At her home university in Berlin, Rike is studying for a degree as an arts teacher. The traineeship supported her studies and future employment in many ways. Rike promises to use her traineeship experiences when she graduates: “I’ve learned to be patient – that’s probably the main thing from the perspective of working as a teacher. But it was also great to see how important it is to be interested in and actually care about what you’re doing. It motivates you to do a good job and make other good choices in life.”

Rike particularly appreciated the teachers’ constant exchange of ideas and good practices.  She says that the German unit is a good team that relies on and values the work of each of its members: “I was always treated as a colleague of equal status, not as a student or beginner. And it was great that I got to influence my job description.”

Rike lavishes praise on the German unit, saying it is obvious that the teachers enjoy their work. The atmosphere during the lessons is good, and the teachers always stay in the classroom afterwards to answer any questions and interact with students. She says that the teachers and students are on an equal footing at the Language Centre, and both appreciate each other.  Students are not afraid to speak and make mistakes. Her traineeship at the Language Centre further strengthened her decision to become an arts teacher.

DEBUNKING THE STEREOTYPE OF FINNS

When asked whether she has enjoyed her stay in Helsinki, Rike says that she has never been met with such warmth as in Finland. The stereotype of the shy and withdrawn Finn holds no sway with her: “I’ve been treated with so much friendliness in Finland. People here work together, not against each other. I’ve always been welcomed everywhere, and so many people here at the Language Centre have thanked me for my contribution.”

Rike promises to return to Helsinki: “Berlin is not that far away, plenty of cheap flights are available, and many friends have offered me a place to stay. I’ve made some great friends here!” Rike states.