Why wasn’t Robert Lowth a Bluestocking? On historical network analysis and gender

I just finished reading Ingrid Tieken-Boon van Ostade’s The Bishop’s Grammar: Robert Lowth and the Rise of Prescriptivism (OUP, 2011). This book includes an interesting network analysis of Robert Lowth (1710–1787), the 18th-century theologian, philologist, and author of the bestselling A Short Introduction to English Grammar (1762), which he did not consider his main scholarly achievement, but which he is nevertheless best remembered for. Ingrid Tieken’s reconstruction of Lowth’s social network is based on his in- and out-letters (about 300 over a time span of 40 years), his memoir, his will, and two lists of presentation copies for his book Isaiah.

What took me by surprise (and what Ingrid notes as well) is that the reconstructed network is predominantly male. We know that Lowth had a wife (Mary Lowth, née Jackson) and that he supported and encouraged Hannah More to pursue her “evangelically inspired” campaigns for the abolition of slavery and “reformation of manners” (Oxford DNB), and his letters include references to the wives and daughters of his friends, but otherwise there is very little evidence of the presence of women in his life. 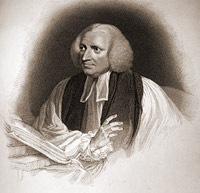 Where were your female friends?

This network data seems to primarily represent Lowth’s scholarly and professional contacts. The women he must have known in the local community, for example, do not appear in these records, and neither do those women whose husbands or other male relatives received a presentation copy of Lowth’s Isaiah and who may have had some contact with Lowth.

So I wondered if Lowth had any contacts with the Bluestockings, whose informal assemblies were frequented by well-read (and more or less pious) women and men who preferred a good conversation over cards.  Tieken’s network analysis shows that Lowth was in touch with Sir William Jones, Sir Joshua Reynolds, Hannah More, and Thomas Percy, of whom Elizabeth Montagu wrote to Elizabeth Vesey in 1768: “I have got a new blue stocking with whom I am most pleasd, a Mr Percy” (Montagu Collection, MO 6393), and there is also a link between Lowth and Samuel Johnson (who wasn’t a Bluestocking but who visited their salons). Yet Lowth didn’t seem to have anything to do with Bluestocking women like Montagu, Vesey, and Frances Boscawen, or the superbly learned Elizabeth Carter. Thomas Secker, the Archbishop of Canterbury, was Lowth’s patron at one point: in Secker’s household lived Catherine Talbot, who was a close friend of Elizabeth Carter and Elizabeth Montagu. It seems likely that Lowth and Talbot knew of each other, at the very least. Several possibilities for contacts thus exist, but as far as I know, Hannah More is the only Bluestocking woman whom Lowth knew personally, and their connection probably derives from shared religious activities.

Did the Bluestockings mention Lowth in their correspondence? Not really.

Lowth’s name comes up twice in Climenson’s 1916 and Blunt’s 1923 editions of Elizabeth Montagu’s letters (four volumes of correspondence, in total). In a 1765 letter to Elizabeth Montagu, Montagu’s husband refers to the public dispute between Robert Lowth and William Warburton, whose scholarly views Lowth had challenged (Blunt 1923: i, 134):

When Mr. Botham came here he brought Dr. Lowth’s book which I like exceedingly, the Professor is very moderate if he abstains from bringing an action against the Bishop [i.e. Warburton] for an assault and battery.    This author of the ‘Divine Legation‘ [again, Warburton] is a scandal to Episcopacy and ought to be deprived of his orders and Bishoprick.

Elizabeth Montagu’s letter to Edward Montagu indicates that she also sided with Lowth in this public (and entertaining) quarrel:

I spent Sunday evening at the Archbishop of York’s where we had a great deal of mirth about Dr. Lowth’s book and I find his Grace is as much pleased with it as you and I are.   I hear Warburton like all bullies is frightened at a brisk attack, and the menace to attack the divine legation has made him shrink in his shell.

“[R]ealy Dr. Lowths application of the passage of Rabelais is very humorous,” Montagu mentioned to her husband in 1765 (Blunt 1923: i, 135), and this is the last mention of Lowth in these volumes. A search for ‘Lowth’ and ‘Bishop of London’ in Elizabeth Carter’s letters to Montagu in Google Books didn’t produce any hits. 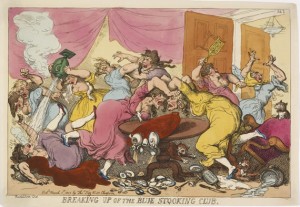 Why didn’t Lowth know these women? They had mutual friends, so why wasn’t he involved in this literary circle?

Didn’t they invite him to their salons?

Would he have been interested in spending time in their company? What was his attitude towards scholarly women in general?

I don’t know what upper clergy appointments meant in terms of domicile, so I’ll just tentatively mention that Lowth was appointed Bishop of London in 1777 – didn’t he spend much time in London prior to that, and could this explain why he did not visit Bluestocking salons? (I find this a rather unlikely explanation.)

Is the network evidence reliable?

It doesn’t seem that Lowth was directly involved with the Bluestocking circle. Letter editions abound with information of social contacts, and they include hardly any references to Lowth who had verified second-order ties to the correspondents. They had opportunities to meet, but perhaps these opportunities did not materialize; perhaps they were not interested in each other’s company. Could be I’m missing something.

And certain implications arise from Lowth’s reconstructed network. This is a predominantly male network: almost all influence, resources, and support that can be observed derive from male contacts. The language analysis focuses on male correspondence – not exclusively, since Lowth’s letters to his wife have been preserved, but is a rare exception, and Mary Lowth’s letters to her husband have been lost. Consequently the question of historical network data and its evidence value is very important. When I analysed social network influence in the Bluestocking correspondence for my PhD thesis, I was occasionally a bit uncertain about how much we can actually hypothesize of the network connection between individuals as a source of influence. Social networks have no clear boundaries (perhaps no boundaries whatsoever), but social network analysis demands that boundaries be defined. And we only have so much evidence of historical network ties.

In Lowth’s grammar, all the examples of erroneous and proper language use are taken from the works of male authors (correct me if I’m wrong!). The grammar conveys a male norm of linguistic correctness. I don’t know if any 18th-century grammarians included examples by female authors of proper language use; I imagine someone has studied this. I’ll edit this post to include any references I may find.

As it happens, other eighteenth-century grammarians fare no better in the edited Bluestocking letters. Joseph Priestley is mentioned a few times in the Blunt edition (you should check out Robin Straaijer’s PhD thesis on Priestley), but the references mainly allude to the Priestley riots in July 1791, which were targeted at religious Dissenters and the politically and theologically controversial Priestley in particular:

Dr. Priestly has been amply reward=d= for his endeavours to introduce anarchy and confusion. (Elizabeth Carter to Elizabeth Montagu, c. July 1791, in Blunt ed. 1923: ii, 260)

Priestley “had his house at Fairhill wrecked and most of his library and laboratory destroyed” (Blunt ed. 1923: ii, 283), and Carter evidently had little sympathy. I’m familiar with Priestley as a grammarian and a scientist, not as a controversial figure, and it is fascinating to see how he was perceived by the Bluestockings, his genteel contemporaries.

[Edit. Secker’s and Talbot’s relationship corrected – I incorrectly remembered that he had married Talbot’s mother.]

Edit 2. Matthew Harrison tackles similar questions about Elizabethan writers in his blog post Elizabethan Hacks over at http://sixdegreesoffrancisbacon.com/, whose ODNB database and algorithm he has used. Harrison on his results:

The resulting networks are male-dominated and overly emphasize weak ties to key political and literary figures over the everyday sorts of sociability that might have governed lives in the period. The given networks lack, for example, the city figures to whom Breton dedicated much writing.

Still more drastically, we don’t hear of the many servants, innkeepers, shop-owners, and apprentices that far outnumbered the “notables”: how different will these networks look, I wonder, when they can be supplemented with data from court cases, the State Papers, and college records?