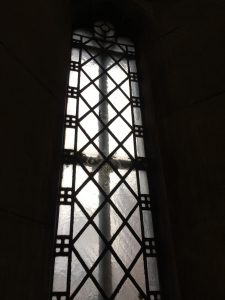 For a mother, there are always moments when you want time to stop: holding your newborn in your arms; seeing your toddler explore the world; or spending precious moments with a child already leading their own life. Life often gives us moments when we feel the need to stop the clocks, step down from the busy highway of life, seize the wheel of time.

John Donne (1572–1631) also had moments when he voiced a similar yearning to master the flow of time. Three poetic instances especially come to mind:

Firstly, Donne’s poem “A Valediction of my name, in the window” shows a magical moment of the poet inscribing his name on glass with a diamond. The poet imagines his lover looking at the inscription and seeing her own reflection in the glass at the same time, and thus his work blurs the parameters of time and place. Most importantly, however, this inscription is eternal and “[s]o shall all times finde mee the same” – at his happiest, most content, safe perhaps.*

The second moment is probably the best known from Donne’s poetry, the poem “The Sunne Rising”. Here Donne (or the speaker, but with Donne that often feels like one and the same person anyway) has been interrupted in his lovemaking to his mistress (and now we tend to believe that this would in fact be his wife and the sole love of his life, Anne More). Donne commands the “[b]usie old foole, unruly Sunne” to go wake schoolboys and tell courtmen the time – but to leave the lovers alone, because love “no season knowes, no clyme, / Nor houres, dayes, moneths, which are the rags of time”.

Finally, in his Holy Sonnet “At the round earths imagin’d corners”, depicting the Day of Judgement, Donne asks God to let the dead still sleep, and to let him “mourne a space”, in order for him to be able to repent and be ready for judgement. Here, too Donne takes to his verbal powers to stop time, at the very last moment, in order to be able to stay in a place in time where God’s mercy and grace still abounds.

This image of man stopping time is closely related to the concept of carpe diem, of seizing of the day, introduced by the Roman poet Horace, and made especially famous in English verse in early modern time by Donne’s late contemporaries like Robert Herrick (1591–1674) and Andrew Marvell (1621–78). With carpe diem the point is to make the best of a moment, not to waste the precious time we are given. However, Donne’s pursuit to master time seems more intense than that, more violent perhaps, more desperate at least, more eager. Donne does not content himself by making the best of a given moment; he wants to hold on to it, be in control of time.

Donne saw the times treat his Catholic family harshly; he experienced the loss of wife and children. He himself almost lost his life in illness, and he realised that indeed, “no man is an island… ”. Life was not always kind to him, and more than once he hoped not only to seize the day but make time stop, give him a breathing-space, let him regroup and decide where and how best to move on. – There were also many moments of love, of gratitude, and of deepest divine devotion. Then too, Donne would gladly have stopped time for a while, to keep happiness close, to savour the moment.

All in all, Donne seems very confident of his power to master time and make it pass – or not – at his command. Although he was strongly aware of all aspects of the heliocentric worldview, especially, we know, of Keplerian thought, he liked to revisit the Medieval reality of an orbiting sun and rising stars in his imagery. So he commands the planets and the temporal realities as well as God’s own composition of time. And he does not plead; he seems to be stating in an assertive imperative like Joshua (“Sun, stand thou still…”) – yet, “there was no day like that before it or after it, that the Lord hearkened unto the voice of a man” (cf. Joshua 10:12–14). Time just does not do that. It tends to move on, everyday – and day by day a little faster it seems. But I can relate to Donne. Not only do I wish to stop for a moment every now and then; I want the moment to stop for me.

Donne’s signature from the title page of Donne’s copy of a book by Johannes Kepler; image reproduced by permission of the Benchers of the Honourable Society of the Middle Temple.