There is a border town in a neighbouring country, a town that up until the end of WWII was the second largest city in my native country. Today, it is foreign land, a venue for short trips and historical excursions, slipping day by day further into the life and routines of new generations of its new inhabitants. Other people call this home now.

Solid medieval walls and towers have endured centuries of possession and battle, winters of snow, and pale summer nights. Their rough surface carries the memories of our tradition, of my country. Perhaps even more poignant are the buildings completed in the 1930s, just before the war, built for a purpose they hardly had time to fulfil before being left behind the new border. Letters and patterns carved in stone, suggesting a trade, representing a company, or celebrating an architect, talk about the future that never came. Whenever I visit the town now, I am not visiting the foreign country, really. Rather, I am taking a trip back in time, searching for traces of days past, looking for that which once was, listening for the sound of my grandmother’s footsteps. Touching the cold stone walls, I close my eyes, and the birds sing in my native language once again.

I am reminded of the English poet, Rupert Brooke (1887—1915), who in his poem ”The Soldier” envisages a moment when he may fall in battle on foreign soil and remain buried there. Then, Brooke envisions, there will be ”some corner of a foreign field / That is forever England”. The presence of the bones of the fallen soldier will mark the land as part of his homeland, forever. (Rupert Brooke did indeed die on a military expedition heading for battle in the Mediterranean, and he is buried on a Greek island.)

In the same way, these walls and buildings are casualties of war, too, left behind the foreign border, buried in foreign soil. These forts and towers make that corner of the foreign land, in our hearts, forever also ours. Underneath the stone surface, beats the warm heart of my tradition, my past, and my soul. Perhaps this town, with the hopes of its new inhabitants, intertwined with the tender memories of another people’s past, can carry ”[h]er sights and sounds; dreams happy as her day; / And laughter, learnt of friends; and gentleness, / In hearts at peace, …” * 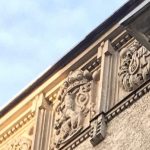