On 27 March 1625, King James I of England (and VI of Scotland) died. On 3 April 1625, the Dean of St Paul’s, John Donne delivered a sermon in memory of the former King, and in honour of the new King Charles. Only today, as the Service of Prayer and Reflection for Queen Elizabeth II at St Paul’s is about to start, do I realise the monumental significance of the moment which Donne was witnessing and in which he participated.

In this sermon, Donne focusses on foundations and on building. “The Commonwealth, the State, the Kingdom is a House”, Donne states. The death of a monarch shakes the foundations of that house, and today have many of us (most of us who do not recollect any other monarch of Britain than Queen Elizabeth II) realised the momentous shift that is taking place at such a moment.

John Donne had witnessed another monumental shift a quarter of a century earlier, with the death of the previous Queen Elizabeth in 1603. Then the Elizabethan era had been replaced by the Stuarts, yet of the same Tudor line through the eldest daughter of the first Tudor King, Henry VII. In 1625, the transition was politically more peaceful, with the crown passing to the son of King James. Then, too, like today, a King Charles was ascending the throne.

While deeply saddened by the death of Her Majesty Queen Elizabeth II, I find solace in the way the circle is closing once again. After all, this royal family carries the same Tudor/Stuart legacy as the Queen and Kings of Donne’s time. There is “a faithfulnesse required in every man”, Donne states in his sermon to King Charles in 1625, “in all the house of God, not in any one roome; a disposition required to doe good to the whole Church of God every where, and not onely at home.” Today’s world requires an openness, an inclusiveness, and a sensitivity, which the new generations of the royal family will surely master with grace – or with “a promise with destiny kept”, as expressed by King Charles III, referring to his mother and predecessor in his first public speech as monarch today.

God bless Her Majesty, Queen Elizabeth II, may she rest in peace. God save the King. 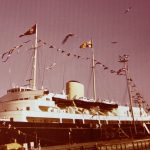 “In what torne ship soever I embarke, / That ship shall be my embleme of thy Arke;”

(The image is of HMY Britannia, in which HM Queen Elizabeth II and the Duke of Edinburgh visited Helsinki in May, 1976.)