Six months ago I visited the Palace of Holyroodhouse in Edinburgh. I had been to Scotland before, and I am especially familiar with its regal history. But it was only on this latest visit to the royal Scottish residence, at a time of looming Brexit, that the historical heritage involved in present-day politics struck me the hardest.

As a Tudor scholar, I am greatly invested in the history of the marriage of the first Tudor Princess, Margaret (1489–1541), to King James Stewart IV of Scotland (1473–1513). The purpose of the union was to create perpetual peace on the isles, and although this peace was hard to attain at first, it was nevertheless a powerful move toward the union of the crowns.

The story of Margaret’s granddaughter, Mary Stuart (1542–67), and Elizabeth Tudor (1533–1603) (rekindled again last year in a spectacular albeit not quite historically accurate film), is often portrayed merely as a tragic history of two monarchs fighting for power. Yet, it is much due to the relationship between Mary Queen of Scots (and once also Queen of France) and Queen Elizabeth I of England that events eventually led to the Stuart succession on the English throne in 1603. A century later, this resulted in uniting the two countries into one kingdom, making Britain truly great.

Unions are formed and resolved with time, that is a historical reality. However, change is never easy, and it is always both an uncertainty and a challenge. Without any reference to modern-day politics as such, on the eve of possible Brexit, this change will affect the union which was the ancient Arthurian dream of the Tudors and which cost the Stuarts so much bloodshed before their final peaceful accession. If Brexit breaks that union, it is this late-Medieval dream of a shared future that is breaking. And my heart.

Last night I was listening to the distant sound of passing helicopters in the cool Finnish summer night. These were part of the national army equipment assigned to escort the President of Russia, now returning to his home country after a visit of political meetings and cultural exchange. Only two months earlier, I was listening to similar sounds from another set of helicopters outside a lecture room at Hebrew University on a hot afternoon in Jerusalem, when the President of the United States was finishing his visit to the Middle East after his talk at the Israel Museum just next door to the university campus. And it strikes me now how the at times seemingly superficial, yet perhaps eventually potentially crucial political events coincide and sometimes intertwine with the lives of ordinary people.

In much the same way William Shakespeare (1564–1616) describes a scene in his play King Henry VIII (1613), where two gentlemen discuss the passing “royal train” taking Queen Anne to her coronation in Westminster in May 1533 (act IV, scene i). This day, the first gentleman states, is one of “general joy”, and the second gentleman concurs:

[T]he citizens,
I am sure, have shown at full their royal minds—
As, let ‘em have their rights, they are ever forward—
In celebration of this day with shows,
Pageants and sights of honour.

To this the first gentleman answers:

We know, however, that also other voices were heard at this time in the streets of London. Contemporary accounts include references to violent and rude language and even mockery when the royal train was passing in the street. Many people were in favour of the recently dismissed Queen Catherine of Aragon, and they would not accept the new wife of the King easily.

Yet, when Shakespeare was writing his play eighty years after the event, he knew that at the time of her coronation Queen Anne had already been pregnant with her only child, Princess Elizabeth. Although a male heir was what King Henry really wanted, Shakespeare had also seen that this future Queen Elizabeth I was to carry the Tudor legacy and make England greater than ever before. (So perhaps we can understand his artistic liberties of focussing on the positive acclamations…) Furthermore, now almost five centuries later, we can see how that child of Queen Anne became the first of remarkable English female monarchs with a long reign and a significant role in international politics and world peace.

Like the royal train in Shakespeare’s play passes over the stage and gives way for a new theatrical scene, so too has the sound of the helicopters receded outside my bedroom window and other news topics top today’s headlines. Only time will tell which of these current scenes will be remembered in the future, how they will be retold, and what role they will play in international politics and world peace. 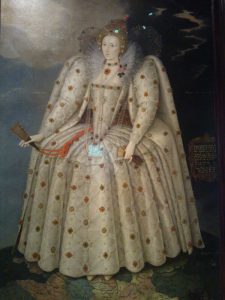 Queen Elizabeth I (“The Ditchley portrait”) by Marcus Gheeraerts the Younger (circa 1592), National Portrait Gallery, London.