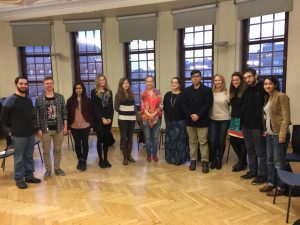 We, the signatories, would like to express our disagreement with the Finnish government’s proposal for the introduction of tuition fees for students coming from outside the EU/EEA.

The introduction of fees at the University of Helsinki concerns students attending and applying for the international master’s degree programmes. Therefore, while many of our arguments apply to international students as a whole, a direct comparison between the experiences of universities and universities of applied science is not possible. Below we outline the main arguments for why we oppose the introduction of tuition fees.

One of the main arguments of those in favour of tuition fees is the claim that since international students do not stay in Finland, their education should not be funded by the state. Contrastingly, research shows that a large number of foreign students intend to stay in Finland. Some of the reasons why foreign students do not end up staying in Finland include the lack of job opportunities, and discrimination in the labour market; however, such a situation need not be the case.

Another point seen in favour of tuition fees is acquiring more funds for the higher education institutions. This argument, however, is also flawed. The introduction of fees would result in fewer students choosing Finland for their higher education destination. Those who are able to pay would choose universities with higher rankings and a longer history of incoming international students, such as universities in the UK and the United States of America. Therefore, Finland’s current niche has been to attract talent that would not otherwise study abroad. In addition, administrative costs would also require sufficient funding, which is unlikely to be paid off from tuition revenues anytime soon. Moreover, the increased focus on marketing and developing the international programmes would turn attention away from the needs and development of domestic education. Finally, the government’s suggested scholarship scheme would lead to more students receiving money rather than paying it. The proposed change is likely to bring more expenses, rather than revenues, in the near future.

Then, there is an idea that tuition fees somehow signal the true quality of the education provided. There is however, no guarantee that the fees actually reflect the quality of education. At a time when the government is increasingly cutting from the higher education sector, how can students be assured of the quality of the education they are paying for? Already now there is a lack of teaching, and students have to take book exams to complete their studies. As stated before, the introduction of fees is unlikely to bring any extra revenue to improve the “service” international students are paying for. In addition, if the quality or quantity of teaching acquires negative publicity internationally, it would be hard to attract fee-paying students.

In our opinion, having an education system without tuition fees is a far better alternative, both from an economic and social standpoint. International students already pay for their living expenses here, adding to, rather than taking from, the national economy. Furthermore, if they are able to stay, they more than pay back their education in taxes. To enable them to stay, we would therefore have to invest in more efficient handling of document procedures (such as applying for the renewal of a residence permit), enhancing job opportunities and the overall integration into Finnish society, and fighting discrimination in all its forms.

Another issue to concentrate on in the free system is language. Learning Finnish is difficult, but with good teaching it is not impossible to learn. Having internationalization, which is not exclusively in English, Finland would set a new and unusual example. If fees were introduced, English would have to be offered an equal status in the university, resulting in more resources being taken away from Finnish and Swedish teaching and investment in further translations. It is impossible to charge fees and keep almost all of the university life in Finnish.

In conclusion, more research is needed about who international students in Finland are, and how they can contribute to Finnish society. However, the above points already show that the introduction of tuition fees is not an experiment we want to “give a go”.

This statement is signed by the following organisations and persons:

Tsemppi, the organization for international and internationally-minded students and researchers at the University of Helsinki

Skald rf, the subject organization for students in the Master’s programme for Culture and Communication, University of Helsinki

Svenska Studenters Agro-Forst förening r.f., the organisation of Swedish-speaking students at the Faculty of Forest and Agriculture

Tsemppi’s Executive Board for 2015 was chosen in the Annual General Meeting on February 10. Congratulations to the new board!

Tsemppi is concerned with the governmental initiative to introduce tuition fees for non EU students. Looking at the experience of Sweden, we can anticipate a severe decline in applications. At least for some of the international students this law would terminate the opportunities to pursue higher education in Finland. However, the benefits of this initiative for the Finnish educational system are also unclear. The probability of receiving significant revenues from tuition fees remains unexamined.

We decided to participate in the public discussion about the issue and provide some additional data.

First, we conducted a survey among current students at the international master’s programs. Here is the report, that provides some information about their perspectives on the choice of education in Finland.

The crux of the problem is that possible effects of tuition fees on the international education in Finland are not fully analysed. Therefore, we would appreciate questions, comments and suggestions to the materials that we collected. It would be great to deepen the discussion about this complex issue.

The Representative Council Election 2014 will take place soon. As the date approaches, Tsemppi encourages you to pay attention to this important event. Voting is an important way to exert influence over our university’s policies.

We invite you to take a look out our platform!

We think that the Student Union of the University of Helsinki can promote integration and internationalization by influencing on the following three levels.

1. STUDENT UNION AND ASSOCIATIONS – Making sure that also international students get the best out of student life in Helsinki

HYY should support subject organizations and other associations operating under the student union in including international students into their activities and in becoming more open to all students regardless of their knowledge of Finnish. Student associations are an important way of building social and professional networks in Finland already during studying.

Furthermore, all the student union members should be able to enjoy the facilities HYY has to offer. HYY should actively inform international students and associations formed by them about how to make a use of facilities, such as meeting rooms, party halls and saunas.

We think that both Finnish and international students would benefit from an international learning and teaching environment, which would be achieved through:

Organizing more and better courses in English and increasing the opportunities for international researchers to qualify as teachers.

Giving international students an access to positions in the University administration, both in theory and in practice

Ensuring that education is and stays free for all

3. SOCIETY – Creating opportunities to study, live, and work in Finland

Housing opportunities in the capital region should be equal for international and Finnish students. The fact that students from abroad moving to Helsinki for the first time, do not often have existing contacts for housing should be taken into account.

Opportunities to stay in Finland after graduating should be promoted and international students and graduates should be encouraged and helped to find internships and work in Finland.

If you want to know more about our candidates, take a look at this Facebook page. To get to know their names and faces click here!

Tsemppi invites all the old and new international students and researchers to start the academic year with us. We will gather on Seurasaari, a beautiful island right next to busy downtown Helsinki, to grill, drink, eat and enjoy good company.

This is a great opportunity to get to know other students and researchers from the Helsinki area as well as to hear more about the activities of international student associations – and to get involved!

Tsemppi and CISSI will offer some sausages, salads and veggies to grill at least for those who arrive early but feel free to bring anything you would like to eat or drink. Please note that there are no stores near Seurasaari.

WHAT? Welcome BBQ for international students and researchers

HOW TO GET THERE? Bus number 24 from Lasipalatsi takes you to Seurasaari – a map and further instructions will be posted here soon

The Executive Board for 2014 was elected during our annual meeting on February 27.

Our next Board Meeting will be held in the Batman Room in Kaivotalo (Kaivokatu 10A, 9th Floor) on Monday, 17 March (6pm) All our members are invited to attend. We’ll discuss Tsemppi’s activities for this year!

The first Board Meeting of the Academic Term 2013 – 2014 will be held on September 10th, Tuesday. We hope to see new people willing to get to know Tsemppi better.

Tsemppi is organizing a Welcome BBQ at Seurasaari. We hope you will be able to join us on September 7 from 1pm to 6pm. We’ll have some starters to offer! In addition you can bring whatever you want to grill.

After a successful year full of fruitful events and collaborations, we are very proud to introduce the Tsemppi Executive Board 2013:

We hope that Tsemppi and Tsemppi PhD will continue to grow with the support of our members. Hope to see you all at our meetings and events!