Out with Palgrave: our latest volume Literatures of Urban Possibility (eds. Salmela, Ameel & Finch). The book is the third volume in a trilogy of literary urban studies books that developed around the Association of Literary Urban Studies (previously Helsinki Literature and the City Network) and the international conferences we organized every other year. Earlier books were Literature and the Peripheral City (2015) and Literary Second Cities (2017). 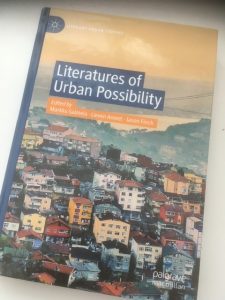 Thanks to Markku and Jason, to all contributors and the participants in the conference (Im)Possible Cities in Tampere, to Palgrave and all encouraging members of ALUS in supporting work within literary urban studies!

Some of my personal favorites among the articles are “From Utopia to Retrotopia: The Cosmopolitan City in the Aftermath of Modernity” by Chen Bar-Itzhak, “Possibilities of Translocal Mapping in Tendai Huchu’s The Maestro, the Magistrate & the Mathematician” by Lena Mattheis (who recently published this brilliant monograph in our Literary Urban Studies series), and Anni Lappela’s “‘Cartographic Ecstasy’: Mapping, Provinciality and Possible Spaces in Dmitrii Danilov’s City Prose”.

“This chapter examines the Helsinki waterfront as a site of the possible, a space onto which possible futures of the city are projected and where competing visions of future urban possibility interact. The first part examines Niniven lapset (‘Children of Nineveh’, 1915) and its connection to the cultural narratives of the waterfront in twentieth-century Helsinki, as well as its relation to more recent developments, such as the plans for a Helsinki Guggenheim. The second part examines near-future novels such as Beta: Sensored Reality (2018), De hemlösas stad (‘City of the Homeless’, 2011), Totuuskuutio (‘Truth Square’, 2015) and Parantaja (The Healer, 2010), and focuses on the interaction between the pessimistic vision of a possible future Helsinki in fictional texts, and the optimistic visions as presented by the Helsinki City Planning Department.”