My most recent article “Narrative Forms of Adaptation, Retreat, and Mitigation in Richard Ford’s Let Me Be Frank with You” has just been published by Poetics Today 43:1, pp. 127-147. Link here. 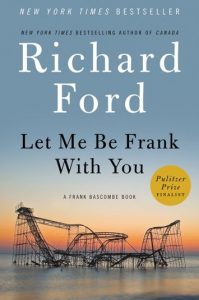 This article examines narrative engagement with strange weather and rising waters in Richard Ford’s Let Me Be Frank with You (2014). It applies three terms from climate policy — adaptation, retreat, and mitigation — as heuristic concepts to approach the formal responses in the novel to a catastrophic event, Hurricane Sandy, while also considering the broader implications for the interplay between narrative form and radical climate change. The focus is on narrative forms such as catalogs, gaps in language and in the storyworld, and plotted instances of compassion. By drawing from environmental policy terms, this article suggests an analogy between how literary fiction functions and how human populations are described as behaving in the language of policy. Literature is adapting in formal terms to a changing climate; it is retreating from the effects of climate disruption, by way of a diluted language; and it is trying to find ways to soften and mitigate those effects — with mitigation approached in its first, now largely obsolete meaning of the word, as compassion. Exploring such analogies, this article emphasizes literary form’s participation in a broader discursive and material meshwork of human relationships with the transforming environment, in dialogue with science and policy
communications.

“Of course, literary form — seen here, following Caroline Levine (2015: 13), as literary “patterns of repetition and difference,” from meter to novelistic plot — does not adapt and retreat in the way coastal communities change their living habits or move to higher ground in the face of radical climate change. And literary form cannot mitigate climate change in the way we can by switching to renewable energy or a more sustainable diet. And yet literary form can display adaptation of existing language and narrative strategies, such as the list, in its responses to climate change, and, as will be explored below, it can even exhibit a marked sense of retreat on the part of language in the way threatening futures are imagined.
In media and policy texts, adaptation, retreat, and mitigation tend to be seen in terms of financial costs and possible risks, visualized in flood maps, graphs, and quantitative measurements. Examples from media and policy include the IPCC’s (2018) use of the term carbon budget or Citigroup’s 2015 report on the economic cost of global warming (Citigroup), or again the warning, in media, that rising waters would cost “trillions of dollars” (Abraham 2018). A novel such as Nathaniel Rich’s Odds against Tomorrow
mimics — and satirizes — such language used in finance and insurance (see also Bergthaller 2018: 117). What unnerves people and institutions, in Rich’s novel, are not the material conditions or the real effects of catastrophe on lives, communities, and civilization but, rather, the figures and numbers that denote risk in financial terms — financial settlements based on insurance policies. Such a position mirrors real-life responses to radical climate change: a recent study focusing on the aftermath of Sandy in New York concluded that for inhabitants of at-risk shores, the flood map — an abstraction visualizing future risk — was perceived as “scarier than another storm” (Elliott 2018: 1068). In Ford’s Let Me Be Frank with You (2014: 49), it is not the specter of a future storm that drives people from their homes, but the prospect of “the new flood maps issued by fuckin’ Obama’s lackeys.”
If the current crisis is a “crisis of the imagination” (Ghosh 2016), it is notable that, in the case of Odds against Tomorrow, fictional language turns to technical, financial, legal, and insurance discourses for models to bring the reader nearer to the future. This appropriation of financial language can be seen as a mode for critiquing such language, but also as an inflection of the novelistic voice by financial and utilitarian discourses that naturalize and normalize highly problematic modes of framing radical climate change in terms of its monetized costs. But other forms of adaptation are possible — including modulations of narrative form that gesture toward chaos and contingency, and toward an inability to assign coherent meaning (let alone to ascribe quantifiable measurings) to chaotic events. Let Me Be Frank with You explores some of these possibilities.”

“Forms, as Levine (2015: 5) reminds us, “matter . . . , because they shape
what it is possible to think, say, and do in a given context.” The partial
breakdown of language and narrative form can act as a reminder of the
limits to our vocabulary and cognitive capacities when faced with the sca-
lar complexities of multiple uncertain futures, and with future losses visi-
ble in our present language. And while, for the characters within the sto-
ryworld, brief moments of compassion are arguably outside the political,
this doesn’t have to be true for the effect on the reader, for whom instances
of emplotted compassion may provide a powerful sense of shared human-
ity across temporal or spatial boundaries, as well as an articulation of the
unspoken loss and grief that have become one of the dominants in thinking
of uncertain ecological and climatic futures.”

I would like to thank Jason Finch for inviting me to Åbo Akademi University to present a version of this article and everyone present at the seminar for their comments. Thanks to everyone at the “Wavescapes” conference in Split/Vis, Srećko Jurišić in particular, for
valuable feedback to an early draft of this article. Thanks are also due to Pieter Vermeulen and Jouni Teittinen for comments at various stages, and to Markku Lehtimäki and Adeline Johns- Putra for extensive and insightful feedback. Finally, I would like to express my gratitude to the editors and outside reviewers of Poetics Today for their thoughtful engagement with my article.