This year saw the end of an era in the administration of the Department of Food Hygiene and Environmental Health when University Lecturer, Docent Mari Nevas took over the position of department head from Professor Hannu Korkeala, who had been at the helm since 1998.

In 2014 the Department’s scientific research efforts led to the publication of three doctoral dissertations, 13 Licentiate theses and 44 peer-reviewed articles. A total of 30 other peer-reviewed publications, such as chapters in books, were also published, and one doctoral dissertation supervised by Professor Raimo Pohjanvirta was completed at the University of Eastern Finland.

August 2014 saw the publication of a new international textbook entitled Meat inspection and control in the slaughterhouse (http://eu.wiley.com/WileyCDA/WileyTitle/productCd-1118525868.html). This up-to-date reference book aims to meet the changing needs of meat control and inspection. The book’s authors include leading international experts in the field. The editors are veterinary surgeon Thimjos Ninios, Docent Janne Lundén, Professor Hannu Korkeala and Professor Maria Fredriksson-Ahomaa.

The Academy of Finland awarded Professor Johanna Björkroth’s research team the sum of 162,088 euros for the two-year project on ICT sensor solutions for the reliable detection of volatile gases from biogenic sources. The research is being conducted by a consortium involving Åbo Akademi University, the University of Oulu and the University of Helsinki.

The Ministry of Agriculture and Forestry granted 200,000 euros to Professor Hannu Korkeala’s project investigating the risk factors and prevention of Listeria monocytogenes in the fish industry. The project also involves Docent Janne Lundén and is being carried out in collaboration with the Finnish Food Safety Authority (Evira) as well as in extensive cooperation with the municipal food authorities.

The virus team led by University Lecturer, Docent Leena Maunula is participating in the Evira-led Ministry project entitled “Exposure to microbiological and chemical hazards via food” from 2014 to 2017. The virus team’s share of project funding totals 93,000 euros. The project explores issues such as the exposure of Finnish consumers to risks caused by intestinal viruses found in food products.

A new initiative in teaching was the organisation of a small-scale seminar for the first time with the Department of Veterinary Biosciences, presenting the concept of “One health – One medicine” to the Faculty’s third-year students taking the course in infection epidemiology.

Following the reform of doctoral education at the University of Helsinki, new doctoral programmes were launched at the beginning of 2014.

The Department of Food Hygiene and Environmental Health accommodates the Doctoral Programme in Food Chain and Health, headed by Professor Hannu Korkeala and coordinated by Laila Huumonen, MSc.

The Department was actively involved in offering postgraduate courses in the Doctoral Programme in Food Chain and Health. The Department staff organised four courses with international experts invited as teachers. The courses were: “Introduction to bioinformatic tools in food hygiene research” by University Lecturer Elias Dahlsten, DVM; “Epidemiology of foodborne pathogens” by Dr Maria J. Vilari and Professor Hannu Korkeala; “Chemical contaminants of food and drinking water in Finland” by Professor Raimo Pohjanvirta; and “Working with bacterial genomes” organised together with the Doctoral Programme in Microbiology and Biotechnology and coordinated by Assistant Professor Mirko Rossi, University Lecturer Rauni Kivistö, DPhil, and Ji Zhang, DPhil.

Organised by University Lecturer, Docent Leena Maunula, the NOVA course “Molecular methods for the detection of foodborne pathogens in food” was held in March 2014. The participants included teachers and postgraduate students from seven countries.

University Lecturer Riikka Laukkanen-Ninios’ poster “Epidemiology and control of enteropathogenic Yersinia in the pork production chain: A literature review” received the Roberto Chizzolini Memorial Poster Award 2014 at the annual scientific conference of the European College of Veterinary Public Health (ECVPH) in Copenhagen in October 2014. The poster by doctoral student Maija Summa, LVM, entitled “Detection of human noroviruses from frozen raspberries: a simple and rapid method” received an award at the poster exhibition of the Finnish Annual Veterinary Congress.

On 1 October 2014, the chancellor of the University of Helsinki granted the title of docent of meat safety and control to Riikka Laukkanen-Ninios, DVM.

Achievements by research groups in 2014

Professor Johanna Björkroth’s research group continued to study the function of genes related to the accumulation of harmful metabolic products as a result of bacteria belonging to the Leuconostoc genus. It was ascertained that the key cause of the genetic regulation of the development of pungent odours related to the spoilage of packaged meat products is the fermentation metabolism of pentose sugars, alongside the previously identified respiration metabolism. Functional genomics has established the mechanisms of many spoilage phenomena at the level of genetic function. This knowledge can be applied to the quality assurance of many groups of food products.

Professor Marja-Liisa Hänninen’s research team has for years developed its skills in the production and analysis of genomic information on pathogenic bacteria. In results published in 2014, genomic analysis was used to establish the population genetics of campylobacter in different animals as well as the epidemiology and sources of campylobacter infections. In the near future, genomic analysis combined with bioinformatics and computational methods will change bacteriological diagnostics, the characterisation of bacterial strains and the establishment of zoonotic infection sources.

Sonja Virtanen, LVM, a member of Professor Hannu Korkeala’s research group, defended her doctoral dissertation entitled Epidemiology of Yersinia enterocolitica on pig farms. A paper written by Professor Korkeala’s research group on the key role of the double component system CLO3403/CLO3404 in the cold shock response of Clostridium botulinum type E was featured as a spotlight article in the journal Applied and Environmental Microbiology. 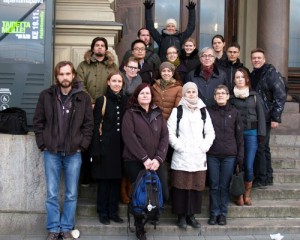 Professor Miia Lindström’s research team discovered new regulatory mechanisms of the neurotoxin production of C. botulinum, and explored the regulation of sporulation in C. botulinum. The research team also reported on an exceptional case of infant botulism in which a child who had made a full clinical recovery from botulism excreted botulinum neurotoxin for months. A member of Professor Lindström’s team, Zhen Zhang, MSc, defended his doctoral dissertation entitled Characterization of neurotoxin gene location, toxigenesis and cold tolerance in Clostridium botulinum.

Led by Docent Mari Nevas, the three-year research project on the impact and cost-effectiveness of food control was completed. The project received funding from the Ministry of Agriculture and Forestry. The project results indicate opportunities to increase the impact and harmonisation of food control activities through various practical measures. The project’s principal investigator was Tiina Läikkö-Roto, a doctoral student and veterinary surgeon.

Professor Raimo Pohjanvirta’s toxicology research group produced seven original publications – an exceptionally high number – some of which appeared in the most prestigious journals in the field (Toxicology and Applied Pharmacology, PLoS ONE, BMC Genomics). One review article was also published. The publications discussed issues such as genes physiologically regulated by the AH receptor, TCDD target cells in the liver of rats, the hormonal effects of TCDD and the metabolic changes caused by TCDD in biliverdin. The genotoxicity of Finnish and Nigerian foodstuffs was also compared. In addition, Professor Raimo Pohjanvirta served as the guest editor of a special issue of the International Journal of Molecular Sciences on the toxicity mechanisms of dioxins.

Professor Maria Fredriksson-Ahomaa served as a member of an international group evaluating the degrees offered by the Swedish University of Agricultural Sciences, including veterinary degrees. She was also involved in the international group set up by the European Association of Establishments for Veterinary Education (EAEVE) to assess and develop education at European veterinary units.

Doctoral student Mariella Aalto-Araneda, LVM, was the Finnish representative at the Next Generation Global Health Security (GHS) Leaders meeting in Washington DC, where 35 young professionals from different fields discussed how to promote global health security. Aalto-Araneda will also participate in drafting the founding charter of the Next Generation GHS Leaders group, and in planning the group’s future activities.

The Department also hosted several international visitors in 2014 in conjunction with teaching and research cooperation.

The Department’s researchers have appeared as experts in the media and have lectured at several events outside the University. One issue that received particular attention was the safety of raw milk. Various media outlets interviewed Professor Miia Lindström on this topic. Her research group cooperates with Evira in studying the farm-level risks and risk factors of listeria, campylobacter and STEC infection through the consumption of raw milk.

In addition to the debate on milk, discussion on antimicrobial resistance has raised interest in the Department’s research. Postdoctoral researcher Annamari Heikinheimo specialises in resistance and has actively participated in the public discussion.

Docent Mari Nevas received funding from the Ministry of Agriculture and Forestry and  Ministry of Social Affairs and Health for a feasibility study to chart the impact of centralising environmental health services in accordance with the objectives set out in the government programme. The study will be carried out together with Outi Lepistö, DVM (EnviroVet).