Veterinary research was recognised by the Academy of Finland’s discipline-specific evaluation, in which the Faculty’s research was deemed to be ahead of other fields by a clear margin in terms of citation indices. Veterinary journals constitute a significant publication forum for our research, so this excellent result is partially attributable to the Department’s research.

Research at the Department has had significant social impact. The research group led by Professor Outi Vainio created an invention related to veterinary medication, the rights to which have already been sold to a private business by the University of Helsinki. This means the innovation will yield commercial benefits.

The research group led by Merja Rantala, DVM, focused on the cases of methicillin-resistant Staphylococcus pseudintermedius (MRSP) discovered in the Veterinary Teaching Hospital’s Small Animal Hospital in 2010–2012. The cause of the outbreak was found to be the MRSP ST71 strain which is -spread widely throughout the world. This was the first incidence of this particular strain of MRSP in Finland. The bacteria were very resistant to several different medications. This study is probably the first description in the world of an outbreak of MRSP in a veterinary hospital. In addition to the Faculty of Veterinary Medicine and the Veterinary Teaching Hospital, the study involved researchers from the Finnish Food Safety Authority Evira and the University of Copenhagen. Samples were analysed in the clinical microbiology laboratory in the Central Laboratory of the Faculty of Veterinary Medicine.

Our researchers have presented their results in conferences and meetings both in Finland and abroad. Doctoral student Henna Laurila, LVM, was invited to present at the annual Congress of the European College of Veterinary Internal Medicine – Companion Animals in Mainz, and Professor Thomas Spillmann spoke at the Eurocongress of the Federation of European Companion Animal Veterinary Associations in Munich.

Our young researchers were active in a range of forums during the year. Linda Thoresen received the award for best poster presentation given by a doctoral student at the ACVIM Forum in Nashville, and Heini Koskinen received an honorary mention for her poster on equine bronchoalveolar lavage at the Annual Veterinary Congress in Helsinki. The journal Veterinary Pathology chose one of the histological images from LVM Ninja Karikoski’s article on laminitis as its cover photo.

The Department also hosted postdoctoral researchers. Stella Barrouin visited us from Brazil 1 September 2013 – 31 August 2014, and Tommaso Rosatti, DVM, from the University of Pisa came for a 10-month exchange through the ERASMUS postgraduate programme. 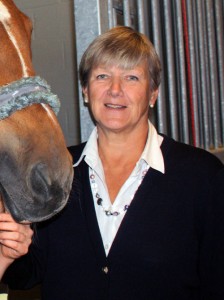 The Department has provided teaching according to its plan. Clinical teaching was extended to the summer months. The clinical teaching working group proposed some changes to the teaching. The implementation of these changes is planned for the curriculum of the following academic year.

The academic affairs committee awarded the course in small animal surgery for its good teaching. The award was granted on the basis of excellent student feedback and the development of the course.

Merja Laitinen, DVM, completed the international Diplomate of ECVDI degree in diagnostic imaging. Her specialisation training was initially supervised by Professor Marjatta Snellman. After her retirement, Professor Snellman became the coordinator of a programme consisting of traineeship periods in the imaging units of several European and American universities. Anna-Mariam Kiviranta became the first Diplomate of ECVN to complete her specialisation training entirely at the Faculty. Her supervisor was Clinical Instructor, Tarja Pääkkönen, LVM, Diplomate of ECVN.

Docent Maria Wiberg, a specialist in small animal cardiology, assembled a group of experts who performed Finland’s first balloon angioplasty on a dog suffering from pulmonary stenosis. Participants in the procedure included Dr Sonja Fonfara from the University of Bristol and Veterinarian Paul Mõtsküla from the University of Tartu, as well as a large number of assistants from the Veterinary Teaching Hospital and the Department of Equine and Small Animal Medicine.