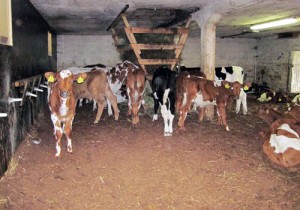 Mycoplasma research is done for example in calf hatchery.

Several significant research projects focusing on the illnesses and welfare of production animals are going on at the Department of Production Animal Medicine. Mycoplasma emerged as the newest research interest, with Professor Timo Soveri receiving funding from the Ministry of Agriculture and Forestry for his project on the effects of and resistance to Mycoplasma bovis infections in Finnish cattle. In 2014 MSc Jutta Kauppi completed her doctoral dissertation on the behaviour and behavioural changes in cows in relation to milking or their deteriorating health. The Department made significant investments in the new generation of researchers and their supervision. In a joint seminar held at the Pajulahti sports training centre, junior and senior researchers discussed the ideal competencies of a new doctoral graduate in veterinary medicine, so that supervisors and supervisees could aim for a common goal. They agreed on common guidelines, and hopefully their work will bear fruit, facilitating and clarifying everyone’s work.

Only minor changes were made to the teaching programmes. Now is the time to assess how the reforms undertaken during the past few years are taking effect. For a long time now, teaching in the various disciplines has been integrated into larger entities, i.e., blocks or modules. The Production Animal Hospital has introduced measures to ensure that all students completing their clinical rotation can be offered appropriate practical teaching every day. On slow days at the hospital’s mobile clinic, sick calls can be substituted by short teaching sessions involving the animal patients. During their clinical year, students are also offered teaching days focusing on animal protection and ethics as part of the clinical rounds. The assessment of clinical skills through a practical test in the spring preceding the beginning of clinical practice is becoming an established procedure, and adds to the organised structure of the clinical year. With the diminishing number of piggeries requiring the services of the Production Animal Hospital, we have sought methods to substitute for the practical teaching of pig medicine. The students’ voluntary practical training with veterinarians providing medical care to pigs has got off to a good start, and the practice period known as the Seinäjoki pig weeks has been welcomed by the students. The Department’s partner in the field of animal health care in Seinäjöki is veterinarian Jaakko Marttila.

Acknowledgements for the staff

Professor Satu Pyörälä retired after her long career at the Faculty. Her significant contribution to the research and teaching concerning mastitis is, fortunately, being carried on by a new generation of enthusiastic scholars. The association of docents at the University of Helsinki recognised the distinguished researcher of domestic animal welfare, Docent of Applied Ethology Laura Hänninen, as the docent of the year. Hänninen, who actively highlights research in her field in relation to society at large, is a well-known and popular speaker in the international arena. Another acknowledgement was received by a member of our Department when Helena Rautala, DVM, was granted the Pedagogue of the Year award by the EKY association of students of veterinary medicine. 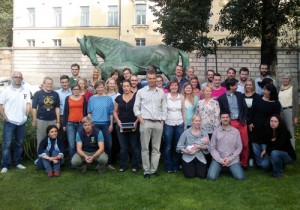 A broad range of international activities

The Department received an international boost from the conference of the European Society for Domestic Animal Reproduction (ESDAR) held in Helsinki and organised by a team of experts led by Professor Terttu Katila and the ESDAR board. The conference attracted 350 participants from the world over. At the conference, Professor Olli Peltoniemi was awarded for his long and successful research on the reproduction of pigs. Peltoniemi has also served as a member of the board of ECAR (European College of Animal Reproduction) and has actively provided training under the organisation’s auspices. For example, he organised the first ECAR summer school in Helsinki, after which he was elected as ECAR president for the following three-year term.

The North-South-South Higher Education Institution Network Programme, funded by the Ministry for Foreign Affairs of Finland and supporting cooperation between higher education institutions in Finland and the developing countries, continued in 2014 with Tanzanian and Kenyan faculties of veterinary medicine. Student and teacher exchanges continued actively, and an intensive course on cattle health care was organised collaboratively in Kenya. Veterinarian Eeva Mustonen from the Department participated as a teacher in this course and shed light on the work conducted in Finland to promote the health of cattle.

The Finnish Centre for Animal Welfare launched a website providing ordinary citizens with information about animals influenced by man (www.elaintieto.fi, in Finnish). The website offers information on animal welfare on a general level as well as by species. It also discusses the definition of animal welfare and the position of animals in society. The ‘current news’ (Ajankohtaista) section features a blog, news and upcoming events. The Centre participated in the reform of the Animal Welfare Act by serving in the relevant steering group and communicating the results of the group’s meetings in the above-mentioned blog. Thanks to the Centre’s endeavours, the following two surveys were conducted for the amendment of the Animal Welfare Act: a survey on the effects of free stall housing and tie stalls on cattle welfare and the economic implications, and a survey on the production and economic effects of abolishing mating suites in sow barns. 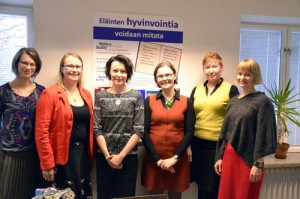 Jenni Haukio, the spouse of the President of the Republic of Finland, visited the Viikki Campus and was presented with an extensive overview of the research on animal welfare conducted at the Faculty of Veterinary Medicine. This visit also gave researchers at the Department of Production Animal Medicine an opportunity to make their work known. The Department’s work was also presented in the wider context of the animal welfare forum, which has become an annual tradition offering information to the public at large. This year the forum focused on the pain experienced by limping animals.

Late in the year, the discipline of animal management and welfare acquired new office facilities connected to the Veterinary Teaching Hospital in the Clinicum building on the Viikki Campus. The new facilities comply with modern ergonomic requirements, and the motorised desks and rooms for quiet work were well received. At the end of the year, the staff were happy to learn about the long-awaited decision to refurbish the production animal facilities at the Saari Unit. Planning began immediately before Christmas, and 2015 is likely to be full of work relating to the construction project. The present facilities no longer correspond to modern requirements for hygiene and the prevention of diseases. Moreover, the significantly larger number of students requires the reorganisation of operations and facilities.

Preparing for the anniversary year

The Department has taken steps to prepare for the University’s 375th anniversary celebration in 2015 well in advance amidst its everyday toil. The anniversary year will include a wide range of events. From the point of view of the Department of Production Animal Medicine, one of the most demanding events will be the Faculty’s conferment ceremony. Professor Terttu Katila from the Department has been appointed as the conferrer, and the planning and arrangements are progressing smoothly under her supervision.