A year of lobbying and upheaval

EKY, or Eläinlääketieteen kandidaattiyhdistys, is the association of students at the Faculty of Veterinary Medicine. The association’s mission is to promote the interests of veterinary students and to organise diverse recreational activities to balance their workload. 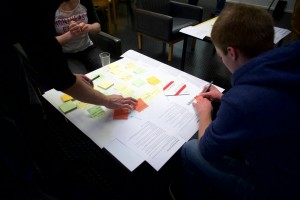 Education development was discussed together with students and teachers in a TKE-feedback session.

Collaboration with the Faculty

In 2015 EKY was actively involved in Faculty operations. Especially towards the end of the year, the great structural changes and staff cuts being planned at the University also kept the student organisation preoccupied. EKY sought, and will continue to seek, to influence decision-makers to minimise the negative effects of the above changes on students. The association maintained close contact with the Faculty through meetings between the EKY board and the dean as well as through mediation with student members in the Faculty’s administrative bodies. In 2015 EKY cooperated with teachers to organise the feedback session Terve kotieläin (healthy domestic animal) with the purpose of together gathering ideas for the development of teaching. EKY representatives engaged in somewhat less formal cooperation with the Faculty by participating in the Faculty’s 20th anniversary celebration for the staff and in the 70th anniversary celebration of Finnish veterinary education together with stakeholder groups.

In 2015 EKY organised traditional activities familiar to members from previous years. Due to their ever-increasing popularity, evening outings with colleagues continued. In these outings, veterinarians from different fields shared stories about their careers, hopefully inspiring students to explore different career options as well as encouraging them to find their own future careers.

The ‘EKY nights’, organised about once a month, provided students with information about, for example, animal feeding and protection. EKY also offered sport activities: the weekly floorball session continued at the Viikki community centre, and a new session was booked for miscellaneous sports. Both sessions proved very popular among EKY members. An excursion into the world of fencing offered a glimpse of some alternative sports. The Nordiska Veterinär Mästerskapet, the sports championships for Nordic veterinary students, was organised in Finland. The EKY team was a success and, as a result, won a trophy that is now on display in the club room Kuopio, awaiting next year’s competition. Throughout the year, the K9 dog club, the Eqvet equestrian club, the Felis cat club, the EHK gentlemen’s club and the Finlandssvenska VetMed FSV, an organisation for Swedish-speaking veterinary students, continued their activities. 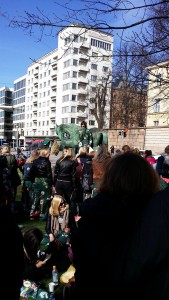 The traditional May Day gathering and singing took place by the horse statue called “Mother’s love”.

EKY kicked off the year with a vintage party celebrating the 1920s. In the course of the spring, many a dinner with wine and song was arranged among EKY members and with other student organisations. EKY’s 69th anniversary celebration took place in Agroksenmäen holvikellari, a festive venue in the Hermanni district of Helsinki. Also in 2015, the first ever EKY speksi brought together students from all levels of studies to perform improvised theatre, dance and music together. Traditional May Day celebrations included, as usual, a game of Finnish baseball against the students of agriculture, the PreWappu (pre-May Day) party, the ceremonial binding of the legs of a horse’s statue and a picnic breakfast with herring at Ullanlinnanmäki Park. Moreover, for the second time, EKY participated in the grand May Day Eve party together with other students organisations; the great attraction of the evening was the rap artist Elastinen. In the autumn, activities included the bar hopping competition Selliappro, the “foal dinner” and initiation ceremony for new students, some more singing dinners, and a Christmas party among EKY members and another with the other students organisation on the Viikki Campus. New students were encouraged to get involved with the help of a “foal pass”; students with actively recorded entries received a prize.

All in all, the year 2015 was an active one for EKY; lobbying efforts were needed throughout the year and especially towards the end. Recreation and parties were actively arranged to balance the toil of studies. Thanks to new active members, EKY expects 2016 to be a busy year not only with numerous activities and events, but also with new challenges.