The anniversary year began with a degree conferment ceremony

Previous research projects continued as before, as did fierce competition for research funding. A considerable amount of new funding was awarded to the projects of the “pig team”, that is, Olli Peltoniemi’s “Free farrowing sows”, Claudio Oliviero’s “The role of colostrum quality, the development of intestinal microbiota, and immunocompetence in neonate piglet mortality, COLPIMO” and Mari Heinonen’s “Antimicrobial medicines and umbilical hernia in the pig”. All of the above received project funding from the Agricultural Development Fund of the Ministry of Agriculture and Forestry. The pig researchers also took action to establish research and teaching infrastructure because opportunities for research and basic teaching on pigs have deteriorated as a result of the plummeting number of pig farms in nearby areas. The researchers succeeded in obtaining corporate funding from Atria and Vetcare and now aim to establish effective collaboration with one of the neighbouring pig farms.

Professor Anna Valros was on research leave in 2015 thanks to a grant from the Professor Pool. No fewer than six doctoral students completed their dissertations. Tuomas Herva, LVM, defended his dissertation on animal welfare and economic considerations in beef production, while the dissertation of Jinhyeon Yun, MSc, explored the conditions, behaviour and hormonal changes in the sow during farrowing. Ann-Helena Hokkanen, LVM, analysed pain in calves and its alleviation in conjunction with dehorning, and Mari Rantala, LVM, examined the oestrous cycle in cattle. Heli Venhoranta, MSc, investigated genetic illnesses related to reproductive problems in cattle, and Eeva Mustonen, LVM, studied red clover isoflavonoids in the feed of ruminants. The Faculty welcomed visiting experts from around Europe to attend the dissertation examinations and hopes that the visits will further increase international research cooperation. 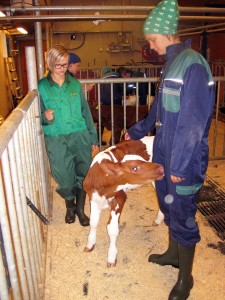 No major changes in teaching

The teaching programme remained unchanged in 2015. The staff provided theoretical teaching in Viikki, and students completed their clinical year at the Production Animal Hospital in Saari as part of the clinical rotation. Student feedback on teaching was excellent: the staff are motivated and take into account students’ needs and abilities, and Saari is a supportive learning environment.

The Department of Production Animal Medicine underwent a significant change when Terttu Katila, professor of animal reproduction, retired after a long career. At her farewell lecture in December 2015, Katila provided the guest audience with a vivid description of teaching and research in veterinary medicine over the past decades. Under her leadership, the Department moved from Hautjärvi to the facilities in Saari. Katila also played an important role in promoting international activities, and left a permanent mark on teaching and research or, in effect, on all of the Department’s activities. The Department welcomed a new staff member in late spring when Professor Päivi Rajala-Schultz took up the position of professor of milk hygiene and cattle health. The Department was pleased to welcome this returnee to Finland and hopes that she will bring several milk churns’ worth of new ideas to the Department and the Faculty.

Helena Telkänranta, a doctoral student at the Department, became the focus of media attention when her book Millaista on olla eläin (“What is it like to be an animal”) was nominated for the Finlandia Literary Prize for Non-Fiction. This type of recognition is extremely rare. The Department’s current head, Professor Mari Heinonen, received other kinds of recognition: the University of Helsinki selected her as a member of its Teachers’ Academy and the veterinary students’ association granted her an award for inspirational teaching. Professor Olli Peltoniemi assumed the office of president of the European College of Animal Reproduction (ECAR) at the beginning of 2015.

The annual animal welfare forum targeting members of the University and the general public was again organised in Viikki. This year’s forum focused on the behavioural needs that are essential to promoting animal welfare. The Department’s staff were also involved in organising the programme for the University’s Think Corner during the national “Animal Week”. Visitors could ask questions about animal welfare, such as issues involving food production.

Renovation of the Production Animal Hospital was cancelled

The long-awaited and necessary renovation of the Saari production animal facilities began in early summer after an intensive planning period in the spring. The clinic building was vacated, activities were adjusted for the duration of the project, and some staff members were laid off. Disappointment and disbelief swept the Department when it received shocking news just a few weeks after the renovation had begun: all construction projects involving the University were frozen as part of the University’s cost-cutting programme! Staff and students had to make a great deal of adjustments when teaching previously offered at the clinic had to be provided on client farms or as simulations in classrooms throughout the autumn. In December, operations continued at the unrenovated Saari clinic; the staff may have a long wait ahead of them for the renovation.