In 2015 a total of six doctoral dissertations and two specialist degrees were completed at the Department of Food Hygiene and Environmental Health. The number of published scientific articles was 44. The Department staff participated not only in research and teaching, but also actively contributed to their impact on society. 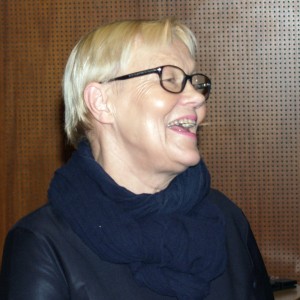 The Department’s long-time professor, discipline coordinator of environmental hygiene Marja-Liisa Hänninen retired in October. Professor (tenure track) Mirko Rossi succeeded her as discipline coordinator. A farewell seminar to honour Marja-Liisa Hänninen was arranged in December, and the speakers included Professor Hilpi Rautelin of Uppsala University, Professor Mati Roasto of the Estonian University of Life Sciences and Dr Ari Hörman, chief veterinary officer at the Finnish Defence Forces, in addition to Professor Hänninen herself. Professor Hänninen received the Timo Pekkanen Prize (becoming the second member of the Department to receive this prize) as well as the golden medal of the Walter Ehrström Foundation (Finnish Association for Milk Hygiene) for her achievements in the field of food hygiene.

As in previous years, the Department actively engaged in international cooperation, especially in research. It also participated in a project funded by the Centre for International Mobility (CIMO) to export training in food safety and to chart research collaboration opportunities between Finland and China.

The Department of Food Hygiene and Environmental Health also actively cooperates with Finnish industry as well as local and national authorities. Besides fostering basic research, the Department considers visible community engagement an important element in its activities.

The Department offered four courses in doctoral education. Professori Hannu Korkeala’s group arranged the courses “Next generation sequencing & genome-wide association studies: exploring genetic mechanisms behind bacterial phenotypes” and “RNA-seq data analysis with Chipster” within the framework of the Doctoral Programme in Food Chain and Health. Also funded by the Doctoral Programme in Food Chain and Health was the course “Planning and analysis of qualitative interviews”, organised by University Lecturer Janne Lundén in collaboration with the Faculty of Agriculture and Forestry, and the course “Emerging zoonosis, antimicrobial resistance and globalisation”, which University Lecturer Mari Nevas set up together with colleagues from the Baltic countries.

In autumn 2015, the Department again organised a course in environmental health care administration, which is a requirement in the specialist education leading to the specialist degree in food hygiene. This time the course drew a total of 25 veterinarians, a clear increase over previous years.

News from the research groups

Professor Johanna Björkroth’s group published 10 peer-reviewed articles on the microbial ecology of food spoilage bacteria and/or their functional genomics. For example, the group published genome sequence studies on the carbon sources of two lactic acid bacteria, a population genetic study on Leuconostoc gelidum subsp. gasicomitatum, which spoils meat and vegetable products, and an extensive survey on the hygiene of the production environment of the meat industry. The group focused on the Leuconostoc family, as the bacteria in this family cause spoilage problems in both meat and vegetables. The Council of Finnish Academies appointed Professor Johanna Björkroth as its representative in the food safety group of the European Academies’ Science Advisory Council and as a member in the Research Council for Health of the Academy of Finland for the term 2016–2018. Professor Björkroth was also appointed to chair the Board for Gene Technology for the term 1 July 2015 to 30 June 2020.

Veterinarian Ann-Katrin Llarena from Professor Marja-Liisa Hänninen’s group defended her doctoral dissertation on the topic “Population genetic and molecular epidemiology of Campylobacter jejuni”. The research groups led by Marja-Liisa Hänninen and Mirko Rossi focused on the exploitation of whole-genome sequencing in the molecular epidemiology of food- and waterborne pathogens. The group published a new type of genome profiler to perform wgMLST analysis, and so far, the profiler has almost 200 downloads worldwide. During 2015, the group published a total of eight articles, and several others are in print or have been submitted for review. International cooperation culminated in the funding decision of the European Food Safety Authority; the group coordinates the research that received this funding. Moreover, doctoral student Alejandra Culebro, Master of Food Sciences, participated in a researcher exchange in the field of glycoimmunobiology at Ryerson University in Toronto, Canada.

In 2015 Professor Hannu Korkeala’s group had two doctoral graduates: LVM Eveliina Palonen defended her dissertation entitled “Sequence variability of virulence genes and stress responses in Yersinia pseudotuberculosis”, and DVM Yağmur Derman defended his dissertation entitled “Stress response of Group I and II Clostridium botulinum” in a public examination. Both Eveliina and Yağmur received the grade pass with distinction. The doctoral dissertation of DVM Elias Dahlsten, a member of Professor Korkeala’s group, received the “best dissertation” award in the Doctoral Programme in Food Chain and Health in 2015. The award recipient was selected from among the doctoral graduates of 2014. Elias Dahlsten was also among the five recipients who were presented with the University of Helsinki Dissertation Award 2014 at the University of Helsinki Funds gala on 22 April 2015. Dahlsten was also the obvious choice for the title of primus doctor at the Faculty’s conferment ceremony.

In 2015 Professor Miia Lindström’s group focused on the ERC Consolidator Grant application and in December received the happy news that they won the grant. ERC funding has been likened to the Olympic gold, so the group was in high spirits. After the agreement negotiations, which span over the turn of the year, the project investigating the toxin production mechanisms of bacteria will launch in spring 2016. Professor Lindström’s group embarked on the EU-funded Marie Curie Innovative Training Network project “CLOSPORE” together with nine other European laboratories. In the autumn of 2015, the project welcomed two new international doctoral students from Poland and the UK. The group also launched a project surveying the risks related to C. botulinum in the production of ready meals. The project is funded by the Agricultural Development Fund (Makera) and carried out in cooperation with the food industry. Moreover, Professor Miia Lindström received funding from the Animal Health and Welfare ERA-Net EU initiative and the Agricultural Development Fund (Makera) for a project beginning in February 2016 to investigate the toxin production and epidemiology of C. botulinum, which causes botulism in production animals, and to develop new diagnostic tests and vaccines. Also in 2015, important collaboration began with the Adriano Henriques Lab (Universidade Nova de Lisboa). This collaboration will be the first to study the mechanisms of toxin production in bacteria at the cellular level. In Lindström’s group, BSc David Kirk defended his doctoral dissertation entitled “Alternative sigma factors F, E, G, and K in Clostridium botulinum sporulation and stress response”. MSc Zhen Zhang’s dissertation entitled “Characterisation of neurotoxin gene location, toxigenesis and cold tolerance in Clostridium botulinum” was examined in late 2014 and graded as pass with distinction in early 2015.

University Lecturer Janne Lundén’s group published results on the efficacy of control measures in slaughter houses in the journals Food Control and Food Policy. Slaughter house control is a topical issue in Europe, and the production of research information plays a major role in developing both effectiveness of enforcement measures and legislation.

University Lecturer Leena Maunula visited the University of Ljubljana, Solvenia, on an Erasmus researcher exchange in late May and early June to learn about the whole-genome sequencing of intestinal viruses. Noor Meersseman from Howest University in Belgium visited the environmental virology group to complete her Bachelor’s thesis on the occurrence of noroviruses in imported oysters.

Professor Raimo Pohjanvirta’s group described transcriptomic responses in rat tissues (hypothalamus, fat) exposed to dioxins and traced the causes of generational differences in sensitivity to dioxin toxicity. Within applied research, the group demonstrated that, according to European standards, oestrogenic activity in tap and waste water in Finland is low. The group’s Nigerian doctoral student, MSc Matthew Omoruyi, completed his doctoral dissertation entitled “Mutagenic and oestrogenic activities of commercially processed food items and water samples: a comparison between Finland and Nigeria” in only 3.5 years. In future, the group will focus specifically on AHR research and expects to publish at least two papers in 2016.

DVM Annamari Heikinheimo, university lecturer, participated in an event at the Korkeasaari Zoo from 19 to 22 February to organise the Well Enough and One Health science themes related to the University’s 375th anniversary celebrations. One of the resulting events was the One Health panel held at Think Corner on 5 February. Participants from the Department of Food Hygiene and Environmental Health included Professors Marja-Liisa Hänninen and Maria Fredriksson-Ahomaa; Annamari Heikinheimo hosted the panel. 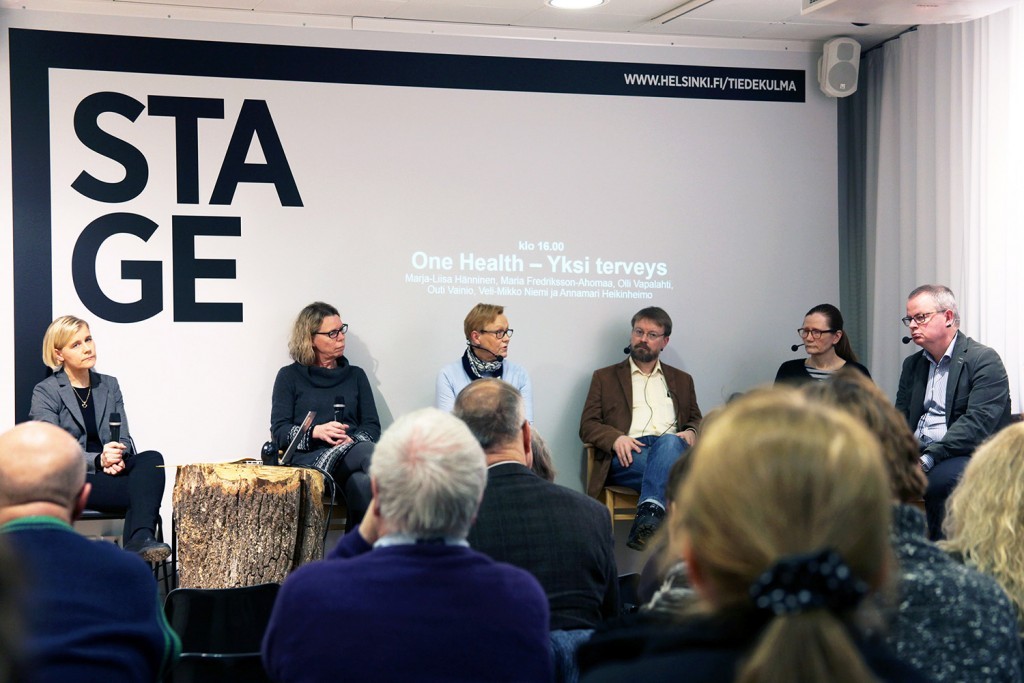 In the autumn, Professor Maria Fredriksson-Ahomaa gave a lecture in the Studia Generalia series on the topic of safe food.

Professor Raimo Pohjanvirta was invited to join the European Food Safety Authority’s working group investigating the health hazards of dioxins as an expert member. The group is expected to publish a new safety assessment by mid-2017.