On the election days, campus areas are taken over by the campaigns of candidate groups, election tents, candy distributors and election ads. The elections are visible particularly in the vicinity of polling stations, such as outside Porthania at Yliopistonkatu Street. In the elections, students may vote at a total of 12 polling stations on the four campuses of the University. In addition, students may also vote in the offices of the UH in Lahti and Vaasa. 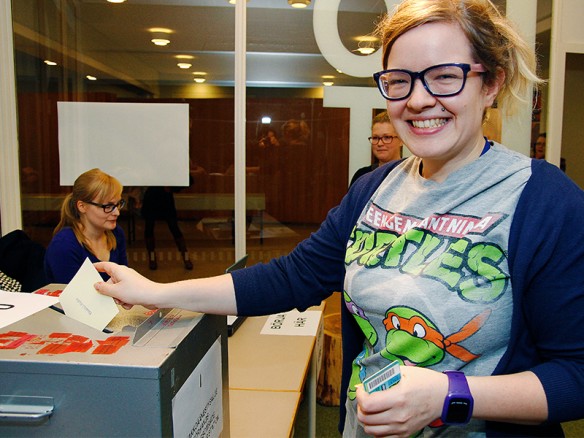 Entitled to vote are the members of the Student Union who have registered for attendance and who are personally present.

The results will be revealed in the election night party at the Virgin Oil Co. restaurant (Mannerheimintie 5) on Wednesday night, 5 November. The election party will begin at 6pm and the event is open to everyone.

HYY is a body governed by public law which consists of students and acts as the benefit, service and non-governmental organisation to its members and is the central and service organisation for approximately 250 organisations which operate within the Student Union. HYY’s Representative Council decides on the Student Union’s monetary affairs, namely the annual budget of approximately 3.5 million euro, decides on the purchase and sale of real estates, sets the goals and key objectives for the Student Union’s business operations and elects the chief editor of Ylioppilaslehti student magazine as well as the Student Union’s presiding officers, board and the secretary general, among others. The term of the new Representative Council will begin on 1 Dec 2014 and the duration of the term is two years.

Text and picture: Student Union of the University of Helsinki (HYY)