The Student Ambassador programme was launched at the university two years ago. The university waves the baton, but making the music sound fresh is ultimately down to the team of current student ambassadors.

Among the student ambassadors are M.A. students Chen Shuo and Dong Junru from China, who act as ambassadors and provide vital support to fellow international students in getting to know the university.

As student ambassadors they act as a link between the university and the community of international students. They use their own experiences to give international students advice in studying and living in Helsinki. Ambassadors help to organize fun activities, like the training together for the Helsinki Midnight Run last summer. They blog, attend expos and, above all, share their personal understanding with fellow students.

Recently Chen’s and Dong’s jobs took them to their homeland China. They worked in Beijing for a week during the Science in Dialogue event in which the university deepened its cooperation with Peking University.

Dong joined the Master’s programme in Biotechnology of Biological and Environmental Sciences department at 2013. He is now doing research on stem cells for his Master thesis.

He found the Science in Dialogue event a truly unique experience.

– I am sitting here in Beijing in the position where I happily can advertise the University of Helsinki to Chinese students. I really have confidence in them and their ability to be excellent students in Helsinki. I feel passionate about my job as ambassador and making new friends, Dong declares. 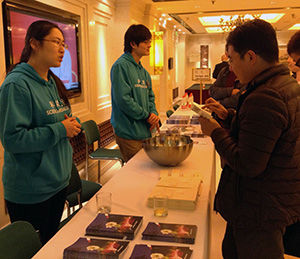 On the campus of the Peking University both Dong and Chen tiredlessly answered questions from Chinese students about studying at the University of Helsinki and about life in Finland.

What university? Is it cold?  What about housing? What country? These are questions that the Peking university students asked Chen and Dong on the campus during the Science in Dialogue event.

Fellow ambassador Chen Shuo is a first year student in the Master’s Programme in Translational Medicine in Faculty of Medicine. In Helsinki she met and greeted the new international students during the orientation week and acted as a campus guide.

– I feel really lucky that my job as ambassador took me from Helsinki to Beijing. In Helsinki I helped with the preparations for the Science in Dialogue event. I translated some texts for the flyer and also wrote the ambassador’s story for Weibo (Sina Weibo is a Chinese microblogging website).