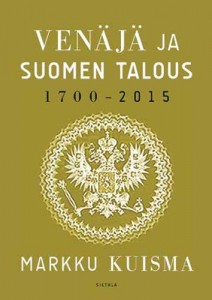 According to the award juror, the book compliments the picture of the Finnish relations with the East and shows that the neighbourly relation with Russia in the course of history has brought more benefits than harm.

The sum of the award offered by Finnish magazine Kanava and the foundation Otavan Kirjasäätiö is 10,000 euros. The award is conferred annually to the best domestic non-fiction book in societal issues, politics, history, culture and economics.

This entry was posted in News. Bookmark the permalink.