Cooperative Business in the Age of Extremes 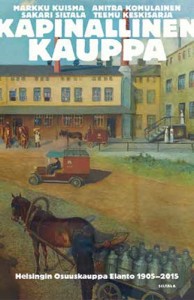 The project studies the close links and interaction between cooperative business, politics and political ideas in the Finnish society. The aim is to examine how business developments intertwined with the ideological and political main currents of the 20th century, capitalism and socialism. At the center of the study is the retail co-op HOK-Elanto, a child of two historical foes: the white-collar HOK and the blue-collar Elanto. The study looks into the relations between politics and cooperative business on national and international scales, but also and especially on a local level, i.e. in the region of the Finnish capital, Helsinki.

The study examines how the developments of HOK-Elanto reflected the political turns, and vice versa: what impact did the politicized retail co-ops have on their members, the society and the region of Helsinki?

The Finnish cooperation rose in extremis of the turn of the 20th century. The Finnish Grand Duchy of Russia was under a strong Pan-Slav pressure compelled by the empire. Simultaneously the people were caught in a crossfire between socialism and capitalism. Cooperation offered a solution: a way to strengthen the struggling nation by unification, and a third path between the ideological and political extremes. In this spirit some members of the high society of Helsinki together with a group of dismissed bakers founded Elanto in 1905. The foundation story resembles that of the Finnish “Wrightian” workers´ associations. Viktor Julius von Wright and the members of the high society founded the first Finnish workers´ associations.

However, the strong ideological disagreements between the bourgeois and the working classes quickly reached a critical point. The civil war of 1918 broke connecting ties within the newborn nation, and the cooperative movement and retail split into two separate political lines. After the war the bourgeois residents of Helsinki established their own retail co-op to compete with Elanto. Helsingin Osuuskauppa (HOK) was founded in 1919.

The competition between the two political constitutions and retail co-ops lasted decades. In such a highly politicized environment a fusion would have been unimaginable. In the 1960´s the cooperative retail as a whole was faced with troubled times, which lasted an almost unbroken period of forty years. Ultimately the severe recession of the 1990´s wrecked most of the “red capital” of the labour movement and forced the competing groups back together. The fusion of HOK-Elanto became true on the 1st of January 2004. The circle was completed.