New Helka is available at the familiar address http://helsinki.fi/helka

Both the library collections data and the customer information you may have had in the old Helka database are now available in the new Helka.

New Helka offers two different searches. Through the Libraries’ Collections Search you can search all print and electronic collections in all Helka. The search includes journals and databases.

Through Article Search, you can search for international articles. Article Search can also find references to publications, which are not necessarily included in the collections of Helka libraries.

If you have a University of Helsinki user account, you can access and read the e-journals and the e-books acquired by university. These electronic resources can be accessed also via remote access. (Read more)

If you do not have the university user account, you can access e-journals and e-books in the Helka libraries.

By logging into New Helka you can access Your Account information: View your loans and save your searches. Customers can renew loans, make reservations or pay the accrued fees online. In New Helka you can also save lists of your favorite referenrences or create scheduled alerts on any saved searches.

Login is possible either with the university user ID or with library card number to which the user has connected the self-chosen PIN code. If you have not yet linked your library card with a PIN code of your choice, you can do it in the old Helka.

The national Search Portal Nelli will be shut down at the end of 2016, as the National Library of Finland will no longer maintain the service. Nelli service will be deactivated gradually and the service can experience  downtime in December. You can find the journals and databases you’ve used to search in Nelli already in New Helka.

The library welcomes all customer feedback on the new Helka interface and the discoverability of library’s collections online. You are encouraged to use the Feedback Form online. 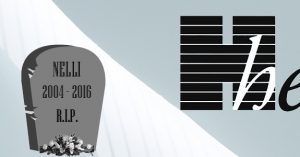 Nelli Search Portal will be deactivated at the end of 2016. The service is terminated as the National Library of Finland will no longer be providing the maintenance and support for it.

At University of Helsinki Nelli portal will be replaced by new Helka interface. All journals and other materials you’ve used to search for in Nelli are already available in Helka.

After December the 31th, 2016, you can no longer conduct searches in the Nelli portal, log in to the service, nor access any material you may have save in My Space in Nelli portal.

If you have any material saved in Nelli My Space, you can move them to other services by December 31th, 2016. To extract your material from Nelli, please follow the instructions.

Customers of the Helsinki University Library have one week left to respond to the customer survey. The survey is intended to determine what the Library’s customers think about the current library services and what they would like to see improved.

Link to the English Survey: bit.ly/HULibCustomerSurvey

According to Service Director Kirsi Luukkanen, the survey is very useful for the Library, which will then be able to focus its resources on the services which its customers believe should be improved. In past years, the attainability and findability of electronic resources has been a particular focus. The number of electronic books has doubled, and their use has nearly tripled over the past few years.

This year, the Library hopes to gain more feedback on the services of the Library which support research work. “We are asking our customers what they think about our services relating to research data, open publishing and the evaluation of research,” says Luukkanen, hoping that as many researchers as possible take the survey.

The Library database Helka has a new interface. Beta release is open for library users to test on helka.finna.fi

You can find the Helsinki University Library collections on the New Helka. Also international electronic journals and articles can be searched through the same interface. 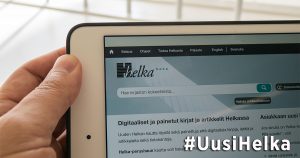 Also collections of other Helka libraries can be searched on the New Helka.

The easy-to-use interface provides you with search suggestions and search results can be organized in many different ways.

When you have a Helka library card, for which you have selected a PIN code*, you can:

You can also log into the New Helka with the University of Helsinki user account. Once you’ve connected your Helka library card number with your user account, you can access all university’s digital collections by a single sign-in.

You can also build and maintain lists of favorites in the New Helka.

*Choose your PIN in the old Helka database.

Any feedback you may have regarding the new Helka interface is warmly welcome. Please give your feedback online helka.finna.fi/Feedback

The New Helka is a beta release that is open for test use. The old Helka interface will be replaced with this new product later in 2016.

The LIBER Conference for European research libraries will be held in Helsinki between 29 June and 1 July 2016. The theme of the conference, Libraries Opening Paths to Knowledge, is highly topical, as it focuses on the role of libraries as promoters of open science.

The goal of the conference is to highlight the work that European research libraries do to promote science and to generate new knowledge in academic communities.

“The significance of libraries in the promotion of open science is recognised to an extraordinary degree in Europe and in the European Commission. The number of participants in the Helsinki conference is higher than ever, which reflects the great interest in the topic,” says the National Library of Finland’s Kristiina Hormia-Poutanen, current president of the LIBER network.

“For example, libraries are currently actively involved in the reform of copyright legislation to unlock the opportunities afforded by open science.”

The conference will welcome more than 500 participants from different parts of the world. Finnish representatives include the Academy of Finland as well as dozens of institutions of higher education and research organisations.

“Libraries and research funders can significantly impact the ways open science will be integrated into everyday research work in research organisations. Succeeding in this requires an open dialogue between both national and international networks,” says Riitta Maijala, Vice President for Research at the Academy of Finland. Maijala is one of the keynote speakers of the conference.

The proliferation of open access publishing models in academic publication provides researchers and the academic community with opportunities to share and access academic information faster and more flexibly than before. Finnish institutions of higher education and research institutes are currently negotiating with academic publishers to enable the efficient use of open publication methods. “Our goal is to simultaneously ensure that the overall costs of academic publication do not increase,” states Mikael Laakso, assistant professor at the Hanken School of Economics and member of the strategy group for the negotiations.

The Ministry of Education and Culture has stated as its goal that Finland will become one of the leading countries in the openness of science and research by 2017. “To reach this goal, we must rapidly transition from subscription-based licensing agreements towards new, open access publishing models,” says Laakso.

Overlapping expenses must be minimised

Currently, institutions of higher education and research institutes pay for academic publications through subscription fees. In an open access model, the author or the author’s organisation pays for the publication of an article. The overall expenses of publication must be examined, as particularly large publishers currently favour hybrid publication, in which a researcher whose article has been accepted for publication in a subscription-based journal can pay a separate publication fee to make his or her article open access. It is important for researchers to publish in journals which are esteemed by the academic community, even if making the article open access requires a separate fee. This model of article fees, however, generates overlapping expenses, unless the publisher correspondingly lowers the subscription fees for the journals in question.

The National Library’s FinELib consortium, which represents institutions of higher education and research institutes in the negotiations, has insisted that the hybrid model, which involves both subscriptions and article fees, be considered an interim solution on the way to full open access publishing. During this transition period it is essential that overlapping expenses from the new open access model and the old subscription model are minimised.

Aiming for a contract with integrated support for open access publishing

The subscription fees for academic journals represent an annual expense of about €23 million for institutions of higher education and research institutes. The exact costs of open access publishing are unknown as they are not monitored in Finland on a national level. However, according to estimates from the project Tieteen avoin julkaiseminen (Open Publication of Science in Finland), in 2014 Finnish universities paid at least €1 million to publish open access articles, and these expenses are on the rise.

Open access models which would be both financially sustainable and easy for researchers are currently also being sought internationally. At the moment, several international campaigns promoting open access are underway, including the Christmas is over campaign organised by the League of European Research Universities and undersigned by several Finnish institutions of higher education. Dutch universities, for example, have been able to negotiate package deals with the major publishers Springer and Wiley which facilitate open access publishing.

Researchers can find support for open access publishing from the library of their organisation as well as the many open access resources online, such as:

The Open Science and Research Initiative

Helsinki University Library celebrates Chinese Lunar New Year with The Confucius Institute’s exhibition of students’ calligraphy and Chinese painting titled “Progression of Seasons”. The exhibition is held on the entrance floor of The Kaisa House (Fabianinkatu 30) from 8 February until 19 February, 2016.

The exhibition has been put together by artist Li Xinsheng.

The opening ceremony of the exhibition will be held on 8 February 16:30.

After Epiphany the Main Library in the Kaisa House extends its opening hours on weekdays. The Kaisa House opens at 8:00 am from Monday to Friday.

The library’s customer service is available from 9:00 am, but other facilities can be used from an hour earlier.

Please note that in the mornings between 8 and 9 am the library is being cleaned, so complete silence cannot be guaranteed.

Starting January 2016 the Main Library in the Kaisa House and The Viikki Campus Library will launch self-service for picking up reserved books.

Reserved books can be picked up from the customer service areas in the libraries after the customer has received a notice of arrival. Reserved items are in the open shelves alphabetized by the customer’s name. The customer can check out the reserved books on the self-service check-out stations like any other books.

Textbooks are subject to a reservation fee (1 euro / book). Please note that the fee will be added to customer’s data as soon as the book is ready for pick up. Other than textbooks can still be reserved free of charge. The fee for all requests that have not been picked up is €2/book if the request has not been cancelled before the notice of arrival.

If you do not wish your name visible on open shelves, please contact the library. You can agree to pick up your reservations at the service desk as before.

HELKA-database will be unavailable from Saturday, November 14th, 2015 at 21 p.m. until Sunday, November 15th, 2015. Service should resume no later than Monday morning.

The break covers the HELKA online catalogue as well as the libraries’ systems.

The following HELKA-services are not available during the break:

We are sorry for the inconvenience.

The Kaisa House will be open normally during the weekend, from 11 am until 5 pm on both Saturday and Sunday. On Sunday there will be limited service as Helka is unavailable. Loans cannot be checked out.

Library’s other online resources, for example electronic journals can be used normally. Search through Google Scholar or Nelli Search Portal, for example.