Historiography of Commercial Law: Past, Present, and Future

13.15 – 18.00 Presentations on the historiography of commercial law

Anja Amend-Traut (Würzburg): Johann Marquard (1610-1668) and his Contribution to the Commercial law’s development

Second Day (Wednesday, Sept 27): The Present and the Future

9.00 – 12.00 Debate: Historians and Positive-Law Scholars on the History and Present of Commercial Law (Porthania, room P722)

12.00 – 13.00 Keynote: Albrecht Cordes (Frankfurt): The Codification of Sea Law in Northern and Western Europe in the 13th Century

UPDATE (24 February): Call for Papers for the Doctoral school session

Historiography of Commercial Law: Past, Present, and Future

The fifth conference of the project aims to examine the historiography of commercial law in a broad perspective. First, there will be presentations by invited scholars from various European countries discussing the historiography in their respective regions (The Past). The second conference day will begin with a debate with invited historians and positive-law scholars discussing, e. g., the relationship between history and positive law in commercial matters (The Present). The final part of the conference is dedicated to a doctoral school for Ph.D. students introducing their current research (The Future).

Six Ph.D. students will be selected through this open call to participate in the doctoral school session. The presentations (15 min) will first be commented by a senior researcher (10 min) followed by a discussion (10 min) Papers may cover the history of commercial law from the medieval to the modern period. Presentations should be in English. For the six selected students, hotel accommodation in single rooms for two nights in Helsinki and travel costs up to 500 euros per person will be paid. More students may be selected to participate at their own cost and conference fee of 50 euros.

To offer a paper, please send the title of the paper, a short abstract (200-400 words), and a short CV to the project coordinator Jussi Sallila (jussi.sallila[at]helsinki.fi) by 31 March, 2017. Accepted papers will be announced by 15 April, 2017.

13.15 – 18.00 Presentations on the historiography of commercial law

Anja Amend-Traut (Würzburg): Johann Marquard (1610-1668) and his Contribution to the Commercial law’s development

Second Day (Wednesday, Sept 27): The Present and the Future

9.00 – 12.00 Debate: Historians and Positive-Law Scholars on the History and Present of Commercial Law

12.00 – 13.00 Keynote: Albrecht Cordes (Frankfurt): The Codification of Sea Law in Northern and Western Europe in the 13th Century

Six (6) Ph.D. students selected by steering group on basis of an open call. Each student gives a short presentation (15 min) and is then commented first by one of the senior researchers (10 min), followed by discussion (10 min). Ph.D. papers will be circulated well in advance to save time for discussion. 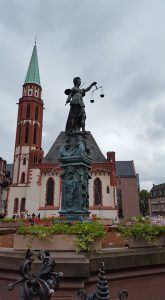 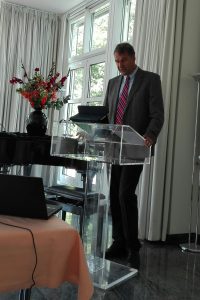 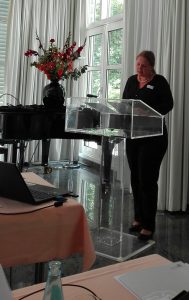 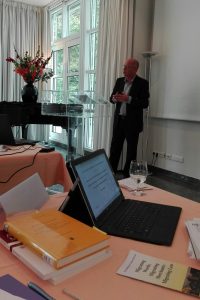 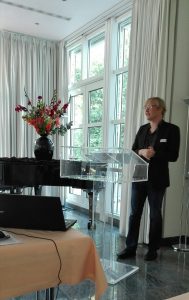 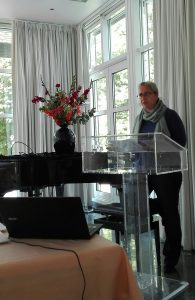 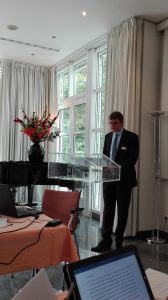 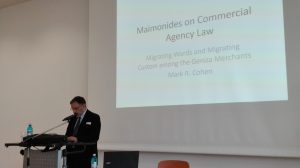 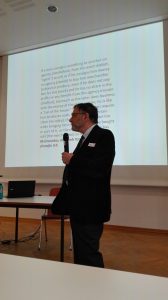 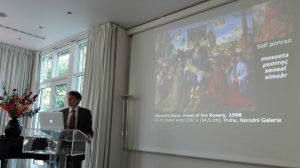 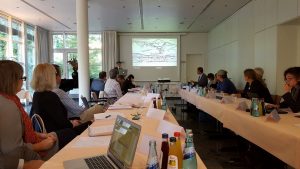 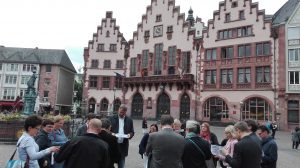 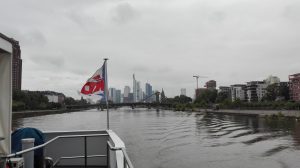 4th workshop on “The Making of Commercial Law”

The Fondaco dei Tedeschi in the commercial center of Venice, by the eastern foot of the Rialto Bridge, represents the scope of this workshop – in all three regards suggested in the title.
The Italian word fondaco is a loanword from the Arabic فندق, ”funduq“, which in its turn roots in the Greek πανδοκεῖον, “pandokeion”. These three languages generally share an important vocabulary in regard to economy and trade, and the two younger ones, Arabic and Italian, apparently found both the word and the concept behind it useful enough to import it. The concept, although with important variations, always turns around the issue of housing, feeding, lodging, and controlling foreigners, as well as dealing with them in every sense of the word. Olivia Remie Constable examined both word and fact in her book “Housing the stranger in the Mediterranean World ” (2004) and was able to lay out the 2000-year long journey of the various ways how trade-faring cities and nations hosted and controlled strangers and namely foreign merchants. This is one spectacular example of a wide-spread phenomenon within the realm of commercial law. Let it suffice to list just a few more examples of “migrating words”, choosing three words of the language of the country in which the Commercial Revolution took off: Avaria, Accomandita, Bancarotta, and three words from today’s German (!) legal language: Leasing, Factoring, Franchising – words whose American origin is not necessarily obvious to German law students who use them every day.
The Fondaco dei Tedeschi also represents the “migrating merchants” in our title. Trading techniques are closely intertwined with the question how the merchant was travelling in order to learn the trade, accompany his goods, meet business associates, buy and sell, receive accounts, or even move and change the center of his commercial activity to a new city. It is a likely assumption that the migrating merchant carried his commercial and legal tools with him just like a stonemason would have carried his working tools with him on his way from one construction site to the next. But there, at the end of his journey from Nurnberg to Venice of from Dortmund to Bruges, the merchant encountered new ideas and techniques, and he must have compared his set of tools with those of his foreign partners. The early modern literature on commerce and commercial law (Stracca, Malynes, Marquard, Savary) has one main purpose: Inform the merchant about all matters relevant to his success on his journey and at the destination of his trading route.
The idea behind this workshop is to approach the “migration of laws” by following the migration of words and people in order to verify if, and to what extent, principles, rules and practices, especially in the mercantile world, moved by means of men in flesh and blood more than by means of books. If the interaction between the locals and the strangers, and more precisely the mutual learning process in regard to the daily commercial and legal routine can be considered the necessary premises for the spread of commercial practices, the diffusion of certain technical words provide a witness of the circulation of ideas and rules. The analysis of these two different and at the same time strictly connected kinds of “migrations” can provide a fresh point of view on the problem of the diffusion of commercial practices at a transnational level, with focus on the Mediterranean and Northern European seas.
Osmosis, hybridization, assimilation – a number of widely discussed key words spring to the mind. The two trading route examples were chosen with intention: In 1508, the City council of Nurnberg adopted the Venetian tutelage laws – a fact important enough to the lenders to boast with it by painting the scene in oil and hanging the painting into the Palazzo dei Dogi; and the Hanseatic merchant Hildebrand Veckinchusen who spent childhood years in Dortmund organized his book keeping by copying the model he encountered in Italian and Flemish firms after moving to Bruges around the year 1400. It won’t be hard to come up with additional examples but we will try to take the next step and ask: Why? The merchants adopting something foreign and new must have deemed it favorable, but based on what reflections? What did they find weak and disadvantageous about the usual, traditional ways they were brought up with? Were there regrets? After the failure of the Venetian Company Hildebrand’s brother Sivert Veckinchusen complained in a letter that they should better have stuck to the “old nourishment”, referring to the traditional trade along the axis Bruges-Lübeck-Novgorod. If we listen carefully, we can still hear Sivert sigh.

The aim of this workshop is to bring together recent findings on the influences overseas trading (with a particular focus on Early Modern and Modern Times) and in particular colonial settlements (whether crown or charter colonies) have had on commercial law and legal practices in a broad sense. Over the past years, scholars have been studying “colonial law and justice”, emphasizing on the transplant and adaptation of legal rules and courts to the colonies, also as concerns commercial law and practices. It appears that colonial experiences not only led to the development of a particular so-called “colonial law” but also influenced commercial practices of the major colonial Empires, as well in their relations with their overseas colonies as on an international level. In view of this, many ideas about the influence of colonial experiences on the making of commercial law should be reconsidered. This round-table conference will therefore bring together topics that can be addressed within this “colonial” framework as maritime commercial law, risk and insurance, commercial contracts, company law, State and Private enterprises, conflicts of law and conflict resolution.

The workshop is the third in a series on the history of commercial law, organized during the 2014-2017 period in Helsinki, Brussels and Frankfurt. The conferences will be organized in the framework of the project “The making of commercial law: common practices and national legal rules from the early modern period to the modern period.

14h-15h15 : Seventh session
Jakob ZOLLMANN (Wissenschaftszentrum Berlin für Sozialforschung), “Neither the State nor the Individual goes to the Colony in order to make a bad Business”. State and Private Enterprise in the Making of Commercial Law in the German Colonies, ca. 1884 to 1914.
Bas DE ROO (Ghent University), Negotiating colonial tariff policies. Customs and commerce in the Congo (1885-1914).

The goal of this workshop is to bring together scholars who have worked on business ventures, and to address law and economic practice from the Middle Ages until c. 1900. We particularly invite for papers that assess differences with regard to the size of partnerships and companies. Over the past years, more attention has been paid to limited and general partnerships and to organizational laws containing models for small enterprises (e.g. the sprl and GmbH). It seems that both in legal and economic practice, and for all periods mentioned, smaller companies mattered more than was previously thought, and even in periods in which corporations existed. In view of this, many ideas about larger companies can be reconsidered. Topics that can be addressed with regard to small, medium-sized and/or large companies are a.o. legal personhood, limited liability, corporate finance, and corporate governance.

The workshop is the second in a series on the history of commercial law, organized during the 2014-2017 period in Helsinki, Brussels and Frankfurt. The conferences will be organized in the framework of the project “The making of commercial law: common practices and national legal rules from the early modern period to the modern period”.

Matthijs de Jongh (Court of Appeal, Amsterdam), Fuzzy Borders: Dutch Partnership and Company law in the Second Half of the 18th Century

Entrance is free, but registration is required. The final date is 15 April 2015. Please send an email to dderuyss@vub.ac.be. Papers will be sent to participants.

Heikki Pihlajamäki: Constructing a field of law: sources of commercial law in Scandinavia

Alain Wijffels: Records and sources of commercial litigation before the Great Council of Mechelen (15th-16th centuries)

Peter Oestmann: Court records as sources for the history of commercial law: The Oberappellationsgericht Lübeck as commercial court

Mia Korpiola: Svea Court of Appeal records as a source of commercial law

Anja Amend-Traut: The high imperial courts (the Aulic Council and the Imperial Chamber Court) and commerce

Boudewijn Sirks: The High Council of Holland and Zealand (to be confirmed)

Guido Rossi: Comparing the sources of English and continental commercial law – with the example of maritime insurance law

Session 6: Custom and Codification in French and Italian Commercial Law, 14.00-16.15

Olivier Descamps: On origins of the French Commercial Code: vicissitudes of the Gorneau Draft