The old case: In short, I nominated a journalist for his, in my view, awful article (Reid, 2018) about bicycle helmets for the Active Travel Academy’s Media “People’s choice awards (worst reporting).” However, the “People’s choice awards” have not been awarded and they disappeared from the Active Travel Academy’s webpage as if they had never existed. After my repeated questions, I received a somewhat unsubtle impugning of nominator’s (or my?) motives: “Thanks for your interest. We decided not to run it, due to a lack of nominations. Two of us organised the whole thing over a short time, but perhaps we’ll be able to do more next year. Should we run it in future any nominations will need good cause, not just someone with a grudge.”

The new case. People at the Active Travel Academy have recently established a new journal. It’s called Active Travel Studies. We submitted a commentary paper that shows how a single report, despite the absence of supporting data, has been repeatedly cited as if it were proven and how this may have influenced public policy regarding cycling safety. Before submitting it, I had requested permission from the EiC according to the journal’s guidelines. After EiC granted his permission, I submitted the paper.

After 25 days, I received a rejection letter with a few explanatory paragraphs. I thought it was a standard desk-rejection; however, I was puzzled by EiC’s words “We have reviewed and discussed it” knowing that according to the online submission system the paper had not been sent out for review. After several emails, it became apparent that the paper was reviewed by the editorial board members who decided to reject it without external review. Nothing unusual as many journals employ such procedures; however, in this case, this is problematic on at least two accounts.

The journal’s guidelines state that “If suitable experts external to the journal cannot be found then members of the Editorial Board may be asked to complete a review task.” I am clueless about why EiC has decided to perform the peer-review ‘in-house’ and not follow the journal’s guidelines which are very clear about this. Was there any specific reason why EiC was unable to make a decision on his own and desk-reject the paper or seek outside peer-review? My submission was probably the first submission the journal has ever received so it is even more puzzling why EiC decided not to follow the rules they set themselves. A nice start for the new journal.

Another problematic issue with the ‘in-house’ peer-review is another rule to which the journal and its editorial board have pledged to: “The journal operates a double-blind peer review process, meaning that authors and reviewers remain anonymous for the review process.” The journal has an Editor, Deputy Editor, Editorial Assistant and four members of the editorial board. I have written many times on twitter about the target study of our commentary. I have also several (read: too many) times tagged Deputy Editor as she had also cited (though more neutral than others) the target paper in one of her papers. One of the editorial board members follows me on twitter so I am pretty sure he has noticed at some point one of my many writings about the target study of our commentary. I understand that is not always easy to guarantee total author anonymity and that is my fault that I wrote publicly about our paper, but perhaps it would have been wise to exclude these two editors from the ‘in-house’ ‘peer-reviewing’ process. 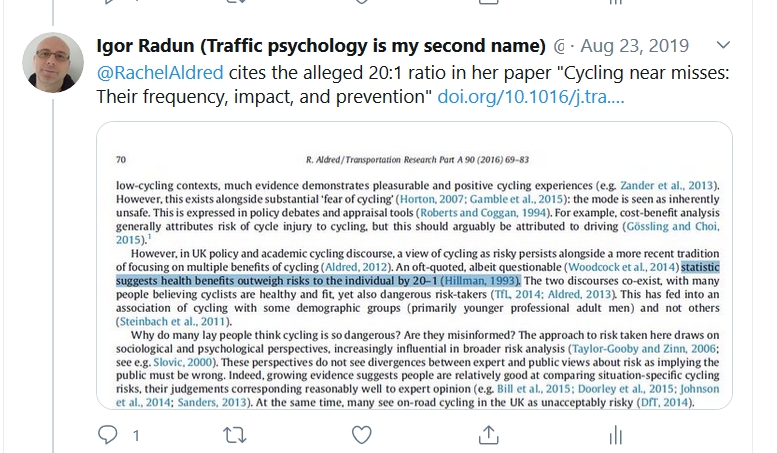 There are difficult authors/people and I am certainly one of those. I like to argue. If I don’t agree with peer-reviewers’ comments that led to the rejection of my paper, I typically write a reply to the editor and give them a permission to share it with reviewers if they want to. Sometimes I write rebuttals if reviewers question our motivation for writing papers, if they personally insult me and my co-authors (new blog is coming about insults) or if they just write silly things. I try to be as polite as possible and focus on arguments rather than people. Sometimes it works, sometimes it doesn’t, but I tend to think editors are also humans and they might appreciate an honest and constructive feedback from authors. As we know, feedback is essential for the learning process.

I hope people from the Active Travel Academy will appreciate my critical feedback and that they will learn something from their mistakes. Mistakes that unfortunately show a pattern. I hope I am not the only one who thinks that set rules should be followed.

Finally, here are some general questions to think about. Do rules exist to be followed always or only when that suits us? Do we just delete the rules from the internet and pretend they have never existed or should we perhaps transparently report about the change? Do we set the journal guidelines and follow them only when it suits us? Do we let our attitudes to guide us instead of the transparent rules we have set? Do activism and ideology come before methods and good scientific practices?

I noticed today that the journal has changed their guidelines regarding peer-review. This is direct evidence that the editors had not followed their rules when dealing with my submission. SHAMELESS!