A new event, not directly connected to the RiP project, but to philosophy, history and history of philosophy in general, that the RiP PI has been co-organizing: 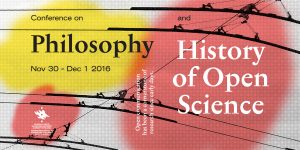 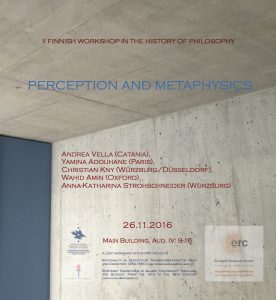 Paper 1: Andrea Vella (Catania), You are what you see. Sensibilia as a key to John of Jandun’s philosophy

18:00 Dinner for speakers and chairs

The workshop is funded by the ERC projects: Rationality in Perception: Transformations of Mind and Cognition 1250-1550 [jose.pereiradasilva@helsinki.fi] and Epistemic Transitions in Islamic Philosophy, Theology and Science: From the 12th to the 19th Century [jari.kaukua@helsinki.fi]

Paper 1: Andrea Vella (Catania), You are what you see. Sensibilia as a key to John of Jandun’s philosophy

As the main studies about John of Jandun (e.g. MacClintock’s, Schmugge’s and Brenet’s books) show, three of the most important questions about this philosopher are: what does Jandun thinks of the truths of faith that are contradicted by the conclusions he reaches by using natural reason? how really close is he – one of the principes averroistarum – to Averroes’ thought? how does he explain the fact that only few human beings are philosophers, given that supposedly everybody loves knowing? These are still open questions, which haven’t received an unanimously accepted answer. In this talk it will be argued that studying what Jandun wrote about sensibilia in his Quaestiones on different Aristotle’s works can contribute to the clarification of the mentioned problems.

One of Avicenna’s major philosophical contributions concerns the modal concepts of possible and necessary. They play a central role in his metaphysics, and notably in his new proof of God’s existence. Averroes is a fervent critique of this proof: he refuses the very idea of a metaphysical proof as it is the task of physics to prove the existence of a prime mover and only movement and not existence can lead to such proof. His criticism relies largely on the denunciation of Avicenna’s understanding of the concept of possible, which is said to be equivocal, general, and the basis for an erroneous and unnatural division of existents. His polemic masterpiece, the Tahâfut al-Tahâfut, offers a comprehensive view of these attacks, which can be found throughout the discussions I, III, IV, VIII and X. Scholars, as eminent as H. A. Davidson, have questioned the pertinence and accuracy of the Rushdian criticism. I would like to examine the relevant passages of the Tahâfut al-Tahâfut in order to determine what exactly is Averroes’s understanding of the Avicennan concept of possible and whether his critique reaches its target.

In the Posterior Analytics Aristotle defines six conditions for each of the premises of a demonstrative syllogism, the most important of which prima facie is the condition of truth. In his Categories and scattered remarks in the Metaphysics, Aristotle also explains that all true statements and demonstrative conclusions must ultimately refer to being. One question that is debated even today among scholars of Aristotle’s thought is whether a necessary truth requires an eternal referent—whether or not, that is, there is a temporal necessity for an eternal object of existence to serve as the truthmaking principle of necessary facts. Naṣīr al-Dīn al-Ṭūsī, a thirteenth-century Muslim philosopher and polymath, argues in precisely these terms, albeit that in his time the straight-forward Aristotelian conception of truth as a form of correspondence (al-taṭābuq) had been significantly developed to account for different types of propositions which had not been considered in the original Corpus Aristotelicum. The following paper discusses, first, the principle of correspondence and its connection to mental existence (al-wujūd al-dhihnī), second, the different types of propositions and the conditions of their truthmaking discussed in later post-Avicennan works of philosophy, and third, Ṭūsī’s argument for metaphysically grounding the truth of necessary propositions in an eternal being that is not God—the Necessary of Existence in Itself. The following paper will hence show how Ṭūsī proffers a unique argument in the history of Arabic philosophy for the existence of an eternal being—an Intellect—other than the First Principle, which combines the principles of Aristotelian science with the cosmological emanative scheme found within Neo-Platonism.

The Renaissance philosopher Agostino Nifo (d. 1538) was strongly influenced by Averroes. In addition to two commentaries on Aristotle’s Metaphysics which draw heavily on Averroes, Nifo wrote a supercommentary on the twelfth book of Averroes’ Long Commentary on the Metaphysics. This metaphysical side of Nifo’s occupation with Averroes’ philosophy has not been thoroughly investigated so far.

In his commentary, Averroes writes at length about the relationship between physics and metaphysics, defending his own theory against both Alexander of Aphrodisias and Avicenna.

This means that, in his commentaries, Nifo, too, must take a stand on the division of labour between the two sciences: Does metaphysics prove the existence of the first cause, or does this task belong to physics? Does metaphysics take over the results of physics, or vice versa?

I argue that Nifo actually introduces a different take on the respective responsibilities of physics and metaphysics, while on the surface simply paraphrasing and explaining Averroes’ theory. Nifo puts more emphasis than Averroes himself on the type of demonstration the two sciences employ, and he focuses more on the hylomorphic aspect of metaphysics.

My talk aims to point out the similarities and differences between the two philosophers, while trying to explain how Nifo interpreted the relevant passages in Averroes in order to arrive at a notably different theory of the relationship between physics and metaphysics.