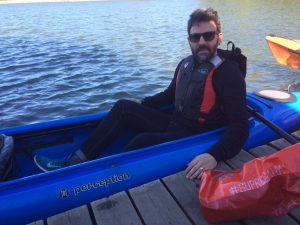 Annemieke Verboon (born in Delft, the Netherlands). Previously worked as a postdoctorate at the Groupe d’Anthropologie Scholastique (CRH/EHESS) and the Centre Alexandre Koyré (CNRS) in Paris, after studying in Amsterdam, Louvain and Leiden (PhD).

I am interested in the early modern concept of the “human” as developed at the crossroads between the history of philosophy, theology and medicine. Combining these different disciplines permits the study of ideas about the human being from a variety of perspectives (cultural, spiritual, psychological, biological and anatomical), which make up historical anthropology. At the heart of my work are the notions of materiality and immateriality, as they relate to the issue of body and soul, and the notion of incarnation of metaphysical and abstract entities. I have moreover a special interest in visual forms of abstract concepts. This inflection is the result of an encounter between my interest in medieval history (I received a doctorate from the University of Leiden), the history of medieval art (University of Amsterdam) and medieval philosophy (Universities of Louvain and Granada).

The contrast between materiality and immateriality was at the core of my thesis, entitled Lines of thought: diagrammatic representations and scientific texts of the arts faculty, 1200-1500. In this work, I dealt with the notion of incarnated knowledge, in which I tied together diagrammatic thinking, textual and visual argumentation, and seeing and knowing in epistemic images produced in the arts faculty during the late Middle Ages. At the same time, this study reflected upon the complex relationship between the history of philosophy, natural and social sciences. The objective of this thesis was to obtain a better understanding of the ways in which the different “sciences” concretized and incarnated the invisible and unanimated world, which was undertaken by means of a philosophical and historical analysis of the role of visual diagrams, speculation and practices in the production of knowledge. In general, and in my thesis in particular, I advocate a contextualizing and transversal approach in order to offer a more rigorous reading of what is at stake in the history of knowledge and philosophy. I have, therefore, for example, been able to demonstrate that, by means of a series of historical examples from the ninth to the fifteenth centuries, the form of the diagrams of the so-called Tree of Porphyry in logic was determined rather culturally than the result of a rational operation. In another publication, I demonstrated that the diagrammatic Tree of Porphyry helps the reader to compare its content to other arborescent diagrams. From the thirteenth century onwards, “arborisare” is an extremely useful tool for the artes praedicandi, as well as for the artes liberales (Verboon 2008; Verboon 2014). Other chapters in this book dealt with diagrams of qualities and quantities within the natural sciences, as well as diagrams of the powers of the soul in philosophical psychology.

After my thesis, I concentrated on those aspects of my thesis that seemed the most promising: diagrams of the powers of the soul. The quantity and richness of the material were much more significant than I could have hoped for during my doctorate. I have been granted the occasion to explore this file further, with the help of a Marie Curie Fellowship (IEF), at the Centre Alexandre Koyré, along with Rafael Mandressi as Scientific Correspondent. This project gave me the opportunity to go through hundreds of manuscripts kept in many different European libraries, which were often quite remote. In so doing, I started a large heuristic and systematic research campaign to establish a corpus of images featuring cognition processes, faculties and the brain. Brain faculty images have been used from the thirteenth century onwards and were still in use in scientific publications of the seventeenth century, despite the many significant conceptual changes in the illustrated theory. The diagram has become iconic and of great epistemological value to the study of ideas about human cognition in Europe, transmitting concepts of Aristotle and Galen into the modern period. I have, therefore, focused on the history of sciences, exploring the role of these images in scientific debates and what light this discipline can shine upon epistemic images. The objective of the research is a monograph about these diagrams as part of the commentary tradition, in the context of the fifteenth-century university-textbook called the Parvulus philosophia naturalis (Peter of Dresden). This book is currently in preparation. In my article, “Brain ventricle images: a century after Walther Sudhoff”, I present the visual sources of the psychology faculty and its place in historiography (Verboon, 2014).

In 2015, I was granted a French fellowship by the Laboratoire d’Excellence HASTEC (Histoire et Anthropologie des Savoirs, des Techniques et des Croyances), based at the GAS (Groupe d’Anthropologie Scolastique) of the CRH (Centre de Recherches Historiques), along with Sylvain Piron as Scientific Correspondent. The GAS is the scholastic branch of the GAHOM, which was founded by the late Jacques Le Goff. Thanks to this fellowship, I was able to develop some case studies of the diagrams found during the previous years. The selected diagrams formed a group, which related to a lecture enunciated at the University of Leipzig at the end of the 15th century. This work resulted in, among others, a publication about cognitive perception (Verboon, forthcoming 2016).

My research on philosophical psychology in texts and images has brought me fully into the philosophy of the spirit under several inflections: the theory of knowledge, cognitive psychology, the union between soul and body, emotions etc. My current interests reach out to the concept of the brain, in terms of a physical organ that functions as an executive platform for exceptional immaterial operations.

(unpublished, finally searching for a publisher). Lines of thought: diagrammatic representation and the scientific texts of the Arts faculty, 1200-1500.
Open Access download at http://hdl.handle.net/1887/16029

2014a. The Medieval Tree of Porphyry: An Organic Structure of Logic, in: A. Worm and P. Salonis (eds.), The Tree. Symbol, Allegory and Structural Device in Medieval Art and Thought, International Medieval Research, 20. Turnhout (Brepols) pp. 83-101.

20 November, 2015, “Do Animals Grasp Universals? Some Medieval Views on Universal Cognition in Nonhuman Animals”, talk at the Finnish Workshop in Medieval Philosophy, University of Jyväskylä

14 July, 2015, “Material Souls, Material Thoughts? Some Medieval Views on Rational Operations in Non-Rational Animals”, talk at the conference “Immateriality, Thinking, and the Self in the Long Middle Ages”, University of Cambridge

21 May, 2015, “Reasoning without Reason? Roger Bacon on the Cogitative Power and Animal Thinking”, talk at the Berlin-Toronto-Groning Workshop “Mind, Matter and Metaphysics”, Humboldt-Universität zu Berlin

18 April, 2015, “Colours and Philosophers. Roger Bacon on the Psychology of Seeing and the Judgments of Sense”, talk at the Oxford Medieval Graduate Conference “Colours: Aspects and Approaches”, University of Oxford

13 April, 2012, “Paradisiac Vegetarianism. Some Thoughts on the Consumption of Meat as Consequence of the Fall in Honorius Augustodunensis’ Elucidarium”, talk at the Oxford Medieval Graduate Conference “Meat: Aspects and Approaches”, University of Oxford

I studied at the universities of Augsburg (B.A. in history, philosophy, and English literature; with a semester in Swansea, Wales), Bonn (M.A. in philosophy), and Würzburg (PhD in philosophy). My doctoral thesis on the epistemology of Nicholas of Cusa was supervised by Prof. Jörn Müller (Würzburg) and Prof. Isabelle Mandrella (Munich). I defended it in Mai 2017 and am now finishing the preparations for its publication.

My research interests are, generally speaking, theories of (human) cognition. In my doctoral thesis, I give a systematic account of Nicholas of Cusa’s notion of human cognition. On the one hand, I examine its shape and coherence. On the other hand, I compare some of its features to what other authors (Aristotle, Augustine, Anselm of Canterbury, Thomas Aquinas, Dietrich of Freiberg, John McDowell) contribute to a few selected topics.

Working on my thesis, sense perception and especially the current scholarly debates on active perception found their way into the centre of my attention – Nicholas’ notion of sense perception falls into the ‘active’ category, but little research has been done on the topic. Contributing to “Rationality in Perception” allows me to pursue my rising interest in active cognition in two regards: First, I can give a more thorough account of Nicholas’s notion of sense perception, expanding on what I can only briefly discuss in my doctoral thesis. Second, as a part of this account, I can branch out historically. Comparing Nicholas’s view with how other authors conceive sense perception at the same time helps placing him in the “bigger picture” and enriches this picture with Nicholas.

(In preparation), “In Touch with the World? Nicholas of Cusa’s Idiota de mente and John McDowell’s Mind and World“.

My research in philosophy is almost entirely devoted to the study of the Greek, Arabic and Latin reception of Aristotle’s psychological works and the doctrine of spiritual knowledge in Augustine. More precisely, I have been working extensively on the idea of a “sensible and yet discursive capacity” (fittingly named “Ratio Particularis” by Thomas Aquinas) as it is developed in Arabic psychological science and its first reception in the Latin West.