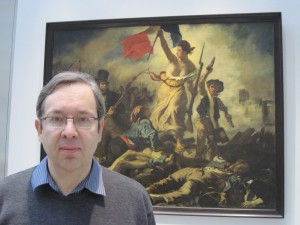 The Academy of Finland funds my Centre of Excellence (CoE) “Reason and Religious Recognition” from 2014 to 2019. In addition, the Academy funds my project “Ecumenical Recognition and Toleration of Otherness” from 2012 to 2016. Together these two ventures employ about ten researchers over a period of six years. The entire CoE consists of 35 scholars. The CoE’s own website is found at:
https://blogs.helsinki.fi/reasonandreligiousrecognition/

Here some information that is also available at the Helsinki Faculty of Theology’s website. You may also consult Heikki Koskinen’s blog Reason and Recognition.

Centre of Excellence in Reason and Religious Recognition

Multicultural societies need toleration in order to flourish. They also need processes of mutual recognition among various groups and stakeholders to avoid segregation and to develop positive group identities. What is the role of religious convictions in the process of mutual recognition? Do religious identities promote or rather prevent the construction of cooperative and responsible societies? Such questions are investigated in the Centre of Excellence in Reason and Religious Recognition (REASON, 2014-2019).

REASON is an interdisciplinary venture that gathers scholars of the New Testament and the Greco-Roman era, intellectual historians, systematic theologians, and philosophers of religion. In its historical dimension, REASON aims at showing how the concept and the practices of societal recognition have been shaped by religious world-views since the times of classical antiquity. Recognition is thus not a notion initiated by Hegel or Western modernity but an intellectual concept and a societal practice that goes through the history of ideas. Religions are not merely objects and obstacles of recognition processes, but they have themselves shaped the understanding of this concept.

The philosophical dimension of REASON focuses on the relationship among toleration, recognition, and human reason. Our philosophers of religion ask, e.g., the following: Is recognition just one sprout in the broader history of toleration or rather something distinct from and complementary to toleration? Does rationality have an over-arching, controlling role in the development of these concepts? If yes, do the religious convictions participate in this role or do they proceed from other premises? To address these questions,  REASON also uses the insights of contemporary cognitive study of religion. The systematic theologians of our project discuss the compatibility of religious doctrines with the requirement of external recognition, heteronomy of identities and rationality of religion.

The team chaired by Ismo Dunderberg explores a broad set of issues related to recognition and non-recognition, extending from ancient philosophy to early Christianity up until 500CE (including a look towards early Islam). The team’s research focuses on the interaction between religious traditions, in particular Judaism and early Christianity, their usage of philosophical discourse, and their opinions concerning the “pagan” religion and practices in the Greco-Roman era. This period is formative to the European philosophical and religious terminology as well as to the cultural habits which later dominated the European religious scene.

The team of Virpi Mäkinen and Taneli Kukkonen focuses on the history of religious recognition from medieval to early modern times, including Islamic thought. The time-span covered extends from the early modern period to the Enlightenment.  As these periods have not been properly covered in earlier studies on recognition, special attention is paid to the choice of topics and texts. The team focuses on the following topics:

In Sami Pihlström’s team, the philosophers will focus their work on the leading paradigms that discuss the boundaries of reason and the possibility of religious recognition, issues which appear in a new light after Kant’s philosophy.  They will also develop the concept of transitive recognition, i.e. a method in which disagreeing parties nevertheless agree about a third party (e.g. a referee, a set of common rules, shared rationality). This team also includes scholars who apply the findings of cognitive study of religion to our issues, as well as systematic theologians who discuss ecumenism and other contemporary mechanisms of mutual recognition in religions.

The three teams cooperate in their research and arrange workshops and conferences together. During the first two years of REASON (2014-2015), Risto Saarinen writes a monograph Recognition in Religion: A Historical and Systematic Study.  This work gathers the existing knowledge and shows areas in which further work is necessary. It also creates a coherent approach to the diverse issues addressed in the three teams, showing their relevance within the field of systematic theology. At the same time, the teams work autonomously, respecting the complexities of their own field of study. REASON is not working in terms of any particular philosophical or theological “school”; we practice critical historical scholarship and welcome different methodological approaches that aim at scholarly excellence.