Greetings from Leuven! From the beginning of 2019, I’m working at the KU Leuven, Belgium, for a six-month stay as Visiting Professor at the Department of Literature. The extended research stay is made possible by TIAS and the generous hospitality of the KU Leuven, who also assisted in providing housing. Thanks, in particular, to Pieter Vermeulen from English Literature. 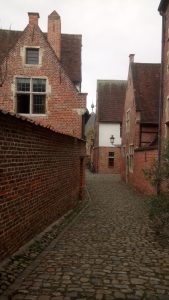 (The beautiful Groot Begijnhof, where we’re staying; founded in the 13th c, most buildings from the 17th c)

I’m excited to learn more about the work being done at the Department of Literature – and beyond. At the KUL, Pieter Vermeulen’s work on contemporary American literature aligns well with many of my own research interests (ao. his work on Teju Cole and within the environmental humanities); Bart Vervaeck’s books on journey’s to the netherworld (Literaire Hellevaarten) and Handbook of Narrative Analysis (with L. Herman) have been an inspiration; and there’s plenty of new research I’ll be getting acquainted with. Very much looking forward to be able to present my current research about narrating futures of cities at the water and to focus on my research project during this time. And really excited, also, about the course I’ll teach starting from February – “Topics in Post-45 American Literature“, with a specific focus on “Futures of New York City in Contemporary American Literature”. An opportunity to test and discuss some of my ongoing research, in particular dealing with novels such as Kim Stanley Robinson’s New York 2140, Jonathan Lethem’s Chronic City, Teju Cole’s Open City,Nathaniel Rich’s Odds Against Tomorrow, and Ben Lerner’s 10:04.

A return to Belgium after 20 years in Finland also provides the possibility to reconnect with friends, family, old colleagues; as well as with my mother-tongue and with literature and research written in Dutch. I hope to make the best of good train connections to also meet up with colleagues in the Netherlands, Germany, the UK, with a first planned visit to the University of Duisburg-Essen in February.