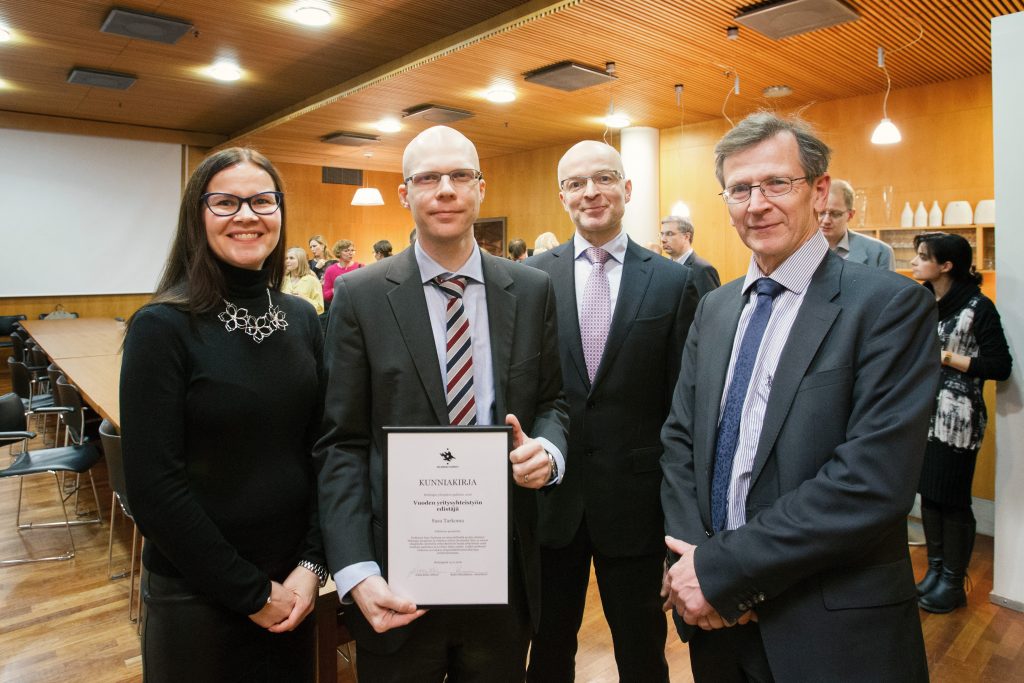 Sasu Tarkoma, professor of computer science, has been exemplary in his efforts to promote cooperation between the University of Helsinki and companies.

“He has brought funding to the University through business collaboration and made new initiatives in teaching and open data. In addition, Professor Tarkoma is involved in the University’s emerging business activities,” stated Vice-Rector Pertti Panula, who presented the award.

“It is a joy to cooperate with the industrial sector. I believe that both parties win, both the University and the companies. The secret to success is in having competent teams, such as the ones I have been lucky enough to work with,” said Tarkoma in his acceptance speech.

Sasu Tarkoma presented his invention at Slush 2015, which led to the establishment of the company MoPrim with the help of Helsinki Innovation Services (HIS). Tarkoma is currently a member of the board at MoPrim, which was also prominently present at Slush 2016 to seek funding.

“The start-up machine is up and running at the University,” says Sasu Tarkoma.

Tarkoma’s invention has to do with mobility sensor technology, and it may be used in public transportation or by individuals.

Thanks to Sasu Tarkoma, the University launched a Massive Open Online Course (MOOC) on information security with F-Secure this autumn. The page has had more than 30,000 visitors, 30% of whom are from the United States.

The award for promoting business collaboration in 2016 was announced on 13 December 2016. In addition to the main award, small gifts were given to everyone who helped shape the University’s cooperation with the business sector.

In his speech at the award ceremony, Deputy Managing Director Antti Neimala from the Federation of Finnish Enterprises emphasised that an increasing number of jobs in the future will be created in small-to-medium businesses.

Business collaboration in research is encouraged, and support is offered through University Services.

Business collaborator of the year 2019

When business professionals are looking for quick discussion about certain research field, the answer is a Cup of Science meeting. Read more