ASEEES Annual Convention is the biggest annual international conference of Russian research area. Dr Larisa Kangaspuro was the organiser of the panel section “Towards a brighter future! Social and legal adaptation in Russia” comprising of leading experts from the Nordic countries, England and the United States.

Dr Larisa Kangaspuro worked in the archival section of the Museum of Russian Culture in San Francisco, November 9-16, 2019. The archival section of the museum has acquired unique historical materials, primarily related to the Russian post-revolutionary emigration, as well as pre-revolutionary Russia and the period of the civil war. Some authors of memoirs (mainly the memoirs of emigrants of the second wave and the correspondence of the 1920s-1930s) went through prisons of different regimes: the Red Army and White Army.

She also worked in the Bancroft Library on November 18-22, 2019. The Bancroft Library is the primary special collections library at the University of California, Berkeley. One of the largest and most heavily used libraries of manuscripts, rare books, and unique materials in the United States. For political reasons, it is not easy to find documents on the history of the peoples from the USSR in the Russian archives. Especially about repressive activities directed against them. In particular, the library contains archival materials on the history of Siberia. It is generally known that Siberia was a place of hard labor and exile, both in imperial Russia and later.

The GULAGECHOES team was reinforced in September – November 2019 with the arrival of three postdoctoral researchers. Learn more about Mikhail, Olga and Costanza on the TEAM page! 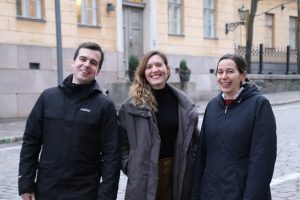 Photo by Niina Into

Professor Judith Pallot was a keynote speaker at the conference:

Professor Judith Pallot was a keynote speaker at the conference 8th November: The Return of the Gulag? Continuities and Transformations in Punishment post-1989