25th April 2022 Dr Mikhail Nakonechnyi took part in the book launch of the edited collection “Rethinking the Gulag: Identities, Sources, Legacies” edited by Alan Barenburg and Emily Johnson, Indiana University Press. The book launch was hosted by the Harriman Institute of Columbia University. Mikhael’s paper was on  the manipulation of mortality statistics in the gulag. He was joined by  Gavin Slade, Sarah Young, and Dan Healy ,as well as the volume editors. The YouTube of the papers and discussion can be accessed at  https://www.youtube.com/watch?v=H-Wuz_-Z11U

Members of the GULAGECHOES team presented their work at the first BASEES (British Association for Slavonic and East European Studies 8-10 April, Robinson College, Cambridge) to take place in person since 2019. Originally, two panels and one roundtable had been planned to foreground our research, but their failure to secure visas for the UK meant that none of the Russian passport holders working on the project were able to travel to the conference. We decided, therefore, to merge the two panels into one which we re-titled, Negotiating ethnicity and identity in the communist and post-communist prison – from gulag to the present day. We were delighted to welcome Dr Gabriela Groza, who has conducted all the interviews for GULAGECHOES in Romanian prisons, to the panel where she joined Dr Mikhail Nakonechnyi and Dr Costanza Curro, two post-doctoral researchers on the project working respectively on the ethnic history of the gulag and the Georgian prisons system from the late Soviet period to today, and Dr Ira Jänis-Isokangas of the Finnish National Archive who is working on the letters of Finns incarcerated in the gulag. On the final day of the conference GULAGECHOES hosted a round table Gulag Legacies and Penal Reform: The Consequences of War on the Trajectories of Change in Punishment Cultures in Eurasia’. The participants consisted of two lawyers (Professor Jeffrey Kahn, expert in the Council of Europe) and Dr Sergey Golubok (now working with the ICC in The Hague on Russia’s war crimes), a criminologist (Professor Gavin Slade, from Kazakhstan), and from the Aleksanteri, the historian of Yugoslavia Dr Brendan Humphreys, anthropologist Dr Costanza Curro and geographer, and area studies specialist, Professor Judith Pallot. 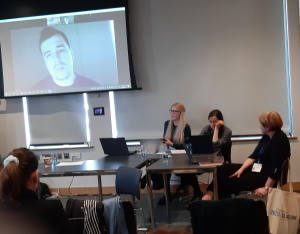 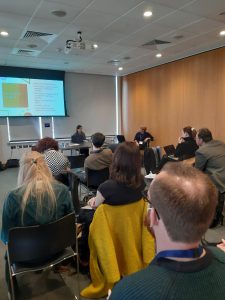