During the course of the March and April, the GULAGECHOES team held two intensive off-site work sessions to code the interviews that the project had been able to complete since fieldwork began in earnest in the later autumn 2019. To date, and despite COVID-19 travel restrictions team members and sub-contracted researchers have been able to take over 100 interviews with former prisoners in Russia, Estonia, Georgia and Romania. This just under one half of all the interviews planned for the project, and which we hope to continue as COVID-19 restrictions begin to lift allowing the ‘home team’ to get into the field. The purpose of the two three-day workshops was to begin the process of coding the interviews taken in Russia. In earlier workshops we had all got to grips with Atlas.ti and had had refined the code groups and codes that a preliminary reading of interviews suggested would be productive answering the main research questions of the project,  as well as suggesting new categories.  Taking the work off-site focused attention at the task at hand and helped us to achieve what we set out to do, and more. 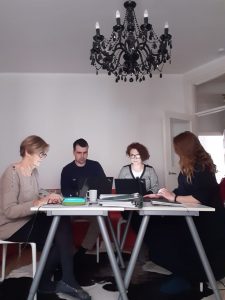 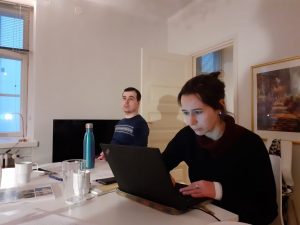 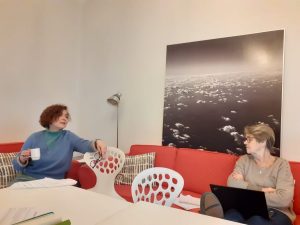 The panel was entitled “Transregional entanglements of Crime and Punishment”. It gave members of the GULAGECHOES team to present some of their preliminary findings from the fieldwork that we have been able to undertake, despite COVID-19. Dr Costanza Curro gave a paper on her work on reform in the Georgina prison system: “Perspectives on the Europeanisation of Georgia’s penal system” and Dr Rustam Urinboyev presented the interviews he took with former Uzbek prisoners who served their sentences in Russian penitentiaries:  “Locked up in Russia: transnational prisoners’ social relationships within and across the prison walls”. These were put in the context of post-1989-1991 members of the former communist countries of international human rights organisations by Professor Bill Bowring of Birkbeck College, the University of London and the project leader, Professor Judith Pallot, who also organised the panel. Dr Sofiya Gavrilova of the IFL, Leipzig chaired and commentated. 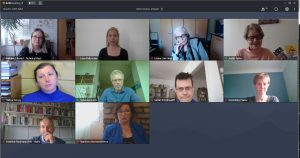 Olga Zeveleva gave a talk on the intersections of ethnicity and class in carceral settings in Estonia at the UCL SSEES Politics and Sociology Seminar Series. The talk is available for viewing on YouTube.

For more videos of public talks, media articles, podcasts, and radio programmes that draw on Gulag Echoes research, see the page Gulag Echoes in the Media.

On 9 February 2020, Olga Zeveleva presented her ongoing research on the Estonian prison system at the Coffee & Sociology seminar, hosted by the Department of Sociology, University of Helsinki. In this first presentation of this part of the Gulag Echoes project, she discussed her preliminary reflections on ethnicity, language, citizenship, and class in the Estonian prison system. You can read more about research conducted in Estonia by project PI Judith Pallot and postdoctoral researcher Olga Zeveleva here.

The press has reported on the arrest of opposition leader, Alexei Navalny, after his arrival back in the Russian Federation. He was immediately taken into custody, where an impromptu court chose to detain him on remand for a period of thirty days.  We now know that he is being held in FKU SIZO-1 FSIN, one of seven Russian prisons directly subordinated to the central prison administration or FSIN (Federal’naya Slyuzhba Ispolneniya Nakazanii).  In this new blog post, GULAGECHOES PI Judith Pallot describes this unusual remand prison, what we know about the conditions in which Alexei Navalny will be held, and whether they constitute a threat to his human rights.

END_OF_DOCUMENT_TOKEN_TO_BE_REPLACED

On 30 November 2020, the postdoctoral researchers of the GULAGECHOES team attended a workshop organized by the ESSO-group (Social Psychologists studying Ethnic Relations at University of Helsinki), Helsinki Inequality Initiative (INEQ), and the Centre for Research on Ethnic Relations and Nationalism (CEREN) at the University of Helsinki, titled “Im­mig­ra­tion, ra­cism and na­tion­al­ism”. The workshop brought together scholars from social psychology, media and communication studies, sociology and political science to join in discussions on challenges of representing immigration, racism and nationalism. Presentations discussed rhetorical, visual, and affective dimensions of communicating these topics.

In addition to addressing the actual challenges of communication, the workshop was aimed to strengthen interdisciplinary dialogue and to take stock of recent theoretical and methodological developments. How can insights from different fields of study be mutually beneficial? How can we enhance interdisciplinary efforts to integrate different kinds of knowledge into multidimensional and nuanced understanding of these complex issues?

Judith Pallot analyses the state of prisons in Belarus in a blog post on the project website. A previous, shorter version of this post was published as an article in OpenDemocracy Russia, entitled “Overcrowded and violent: what awaits Belarusian protesters in prison”.

END_OF_DOCUMENT_TOKEN_TO_BE_REPLACED

The Working Group for Social Sciences under the Finnish-Russian Commission for Scientific and Technological Cooperation (funded by the Academy of Finland) and Tampere University organised a webinar on ethno-political conflicts in Russia. Contemporary Russia has to deal with the legacy of Soviet state by reconfiguring inter-ethnic relations. This process opens a Pandora’s box of inter-ethnic tensions and conflicts. The search for solutions is complicated by numerous other social problems – inequality, inadequate institutions and international tensions. Will Russia be able to cope with these problems and what options look realistic in the contemporary situation? The team members of the GULAGECHOES project attended the webinar.

This webinar was organised between the Gulagechoes team and the research group headed by Federico Varese, Professor of Criminology, the University of Oxford, UK. Federico is a leading expert on the Russian mafia and author of several books and many articles dealing with the Vory-v-Zakone (the Russian mafia) including two monographs – The Russian Mafia (OUP, 2001) and Mafias on the Move (PUP, 2011) and his most recent Mafia Life. The seminar arose because of a recent article about the Russian Vory that Federico and Jakub Lonsky, University of Liverpool, had published about the resilience of the Russian Vory-v-Zakony who are strongly associated with the Soviet and Russian prison system. The webinar lasted two hours with both sides agreeing to continue cooperation in the future.

As part of the 11th Scientific and Practical Conference “Cultural Heritage: Integration of Resources in the Digital Environment” the Presidential Library in cooperation with the Federal Archival Agency, the Union of Russian Museums and the Russian Library Association held the round table discussion “Russia-Finland: pages of our shared history”. The round table discussion spotlighted the issues of history of relations between the Russian Empire and the Grand Duchy of Finland. Dr Larisa Kangaspuro gave the presentation “The Grand Duchy of Finland and “other” prison in the Russian Empire”.
The paper discusses how penal reforms conducted in the Grand Duchy of Finland were perceived from an imperial point of view in the transnational context. Comparison of socio-cultural differences in the perception of the law and the imprisonment of the empire and the autonomy will create new perspectives of understanding the contemporary context of the problem.