Dealing with high-dimensional data is increasingly necessary in biological sciences. When the number of features or measures in a dataset far outnumbers the individuals measured (ie gene expression data, patient registry data), discovering structures and relationships in the data can be challenging. Existing widely-used visualization methods may also give misleading representations. We present focusedMDS, an intuitive, interactive multidimensional scaling tool for high-dimensional data exploration. If time allows, we will also introduce FINEMAPviewer, an interactive visualization tool for GWAS and FINEMAP results. 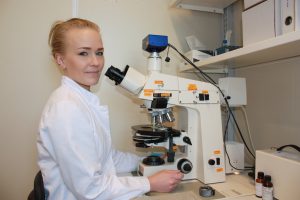 Pia Kinaret is a PhD student at the Institute of Biotechnology, in the research group led by Dario Greco. She is studying alternative approaches for nanomaterial safety assessment, and has recently published an article on this topic. Congratulations Pia!

The world is going nano! Nanoscience is a very rapidly growing field of research. Nanotechnology, nanostructure and nanoparticles are now commonplace terms and have revolutionized various aspects of our daily lives. Nanomaterials are already being used in cosmetics, cleaning products and our food, and have the potential to make supercomputers that will fit in our pockets. One very promising area is the use of nanoparticles as vehicles for drug delivery to targeted tissue sites such as tumor. But, how grave are the consequences when these particles pile up in the environment or inside us?

Technically, nanomaterials are any particles with at least one dimension less than 100 nanometers. The inherent shape and size of the nanomaterials makes them an oddball for our immune system to handle. Similar to asbestos, inhaled nanomaterials can be hazardous; cause severe asthma-type symptoms, granuloma formation, fibrosis and cardiovascular diseases. As the number of engineered nanomaterials is increasing exponentially, understanding the physiological effects of exposure to nanomaterials and developing toxicity standard for nanomaterials is of great importance. Therefore, Pia and colleagues [1] have studied an efficient and cost-effective method to assess nanomaterial toxicity.

The most common route of human exposure to nanomaterials is through respiration. State-of-the-art method for studying the airway-exposure of nanomaterials is via inhalation method, in which lab mice are exposed to aerosolized nanomaterial. However, this is cumbersome and time-consuming. Alternatively, this could be studied by oropharyngeal aspiration, in which the nanomaterial is introduced to animal airways as a liquid dispersion. Aspiration is much faster and cost-effective method compared to inhalation, however it is not yet clear whether the two methods are comparable.

Written by: An Uncharacterized ORF

Dear XXs and XYs, Welcome to the LoF Screening Championship hosted by the World Federation for Functional Genomics (WFFG). We’re having a gloriously sunny day and a more perfect stage couldn’t be asked for an ultimate entertaining extravaganza. LoF, sounds eerily like ‘laugh’ so you may think that this is a competition for the king of comedy of sorts, the one who can leave you Laughing-on-Floor, but sadly it stands for Loss-of-Function.

Loss-of-function screens are concerned with understanding the function of genes by quintessentially removing them from a cell and observing the consequences. For instance, it has been applied in identifying genes that are essential for survival of cancer cells, with the intention to pick out diagnostic markers and targets for drugs, giving them the ability to kill cancer cells. Similar to other functional genomic tools like transcriptome and proteome profiling, LoF screens have also been adapted to high-throughput settings. By nullifying the function of many genes in one go, these techniques can produce a copious amount of data leaving the analyst melancholically overwhelmed.

Today on stage, we have two contestants both of whom have been adapted for high-throughput LoF screens. While one works by knocking down the mRNAs to suppress gene expression, the other works by knocking the gene out. On this sombre thought of gene annihilation, let’s watch this crown battle for the favourite toolkit of natural philosophers, aka scientists.

But first, here’s a quick look at their bios.

Popularly known as RNAi, Ribonucleic Acid interference is the veteran here. Make no mistake, despite the nominal reference to a recreational drug, RNAi’s character remains unblemished by any doping scandals, and most likely is a scornful quip on the scandalous.

Brought out from obscurity by Andrew Fire and Craig Mello in 1998, RNAi generated a huge fire, ahem, fan following and swiftly became the poster child of the Silencer movement that rose to its prominence post-millennium. The arrival of RNAi to the scene provided immense psychological boost to her fans, who could then use it to write their own stories of explorations on suppressing their favourite genes. No wonder RNAi became a heartthrob; for it empowered the people for targeted gene suppression and gave rise to a democratic wave of explorations.

RNAi’s prime strengths are its dicing and slicing abilities that it derives from the adventuring Argonautes. RNAi’s two avatars, siRNA and shRNA, have been successfully deployed by her fans for quite some time. However, as they grew familiar with the technique, RNAi has fallen prey to the old maxim, “familiarity breeds contempt”. Sufficient time has already been devoted to expose RNAi’s shortcomings, inefficient knockdown and off-target effects, that has MELLO-wed the FIRE in RNAi.

on the other side is a new kid on the block. Clustered Regularly Interspaced Short Palindromic Repeats (catches breath) under the nom de guerre CRISPR has ascended to stellar heights within a very short term. Legend has it that, when CRISPR was young and still hadn’t realised his full potential, he was found protecting bacteria in yogurt from viruses. It was Emanuelle Charpentier, Jennifer Doudna and Feng Zhang who trained CRISPR and helped unleash his capabilities.

CRISPR’s strengths come from its Cas9 arm with which it can break DNA at any address directed by the Guide RNA. CRISPR has become a sensational star and has found a cult fan following in the Genome Editors. Ever since CRISPR came into the scene, the Genome Editing community has been very gung-ho about it, almost to the level that their infectious enthusiasm has raised eyebrows of the Human Germline Ethical Brigade.

Like RNAi, CRISPR has also been morphed to perform high-throughput LoF screens. The question remains, who is better at it? Let’s hope we will get the answer today.