In the academic year 2014–2015 I had the privilege to teach a lecture course in Durham University in the United Kingdom. Durham is a rather prestigious university that is very selective in its student intake. In these entries I record some of my thoughts concerning the experience. Although I could only witness the system in Durham, many details can most likely be generalised to other UK universities.

Despite its name, Algebra II is the first course in abstract algebra offered in Durham. It is a second-year course, spanning the whole academic year. Compared to courses taught for example in Helsinki, the course covers roughly the material for a basic one-term algebra course plus a slightly shorter and more advanced course. The course had about 170 students.

I was eager to face the challenge of teaching a full-fledged lecture course in a new country. Having taught algebra before, I knew it to be a difficult topic that demands a lot of abstract thinking and becoming familiar with many new concepts. My colleagues in Durham had also warned me that it would be very difficult to get the students to appreciate how much and what kind of work they would have to do in order to learn the material effectively.

While I was planning my course, it soon became clear to me that to encourage the students to work in an effective manner for their own learning, I should implement methods that in the University of Helsinki go under the name “Extreme Apprenticeship Model”. This model has been applied to teaching certain mathematics undergraduate courses in the Department of Mathematics and Statistics since 2011. After its introduction, the model has enjoyed great success. In particular, it has been successful in engaging the students, teaching them good, professional-style studying habits, as well as making them more committed to their studies in the department.

It was, however, impossible for me to run a full-fledged Extreme Apprenticeship course since I had much less control over the teaching resources than is usual in Finland. Therefore I needed to adapt my teaching to a new environment. In such cases I find it useful to consider the motivations behind the practices in order to decide what is essential and what is not. Doing so, I found that I wanted to focus on

Considering these points led me to implement roughly the following set of methods:

In short, the course ran in the following way. First, the students were given typed, well-prepared notes. They familiarised themselves with new concepts through simple homework problems. They would hand in the problems to be marked. Once the markers had had a few days to look at the scripts, we would meet together to discuss what the students had come up with. Then the markers would go back to finish the marking, while I would discuss the most common mistakes and important misconceptions in the lectures. I would use online voting systems in the lectures to help gauge the students’ learning pace and to promote meaningful discussions. The lectures would also progress to deeper theory and examples, and the next week’s homework would – in addition to preparatory material – also contain harder problems on topics that were discussed during the week. 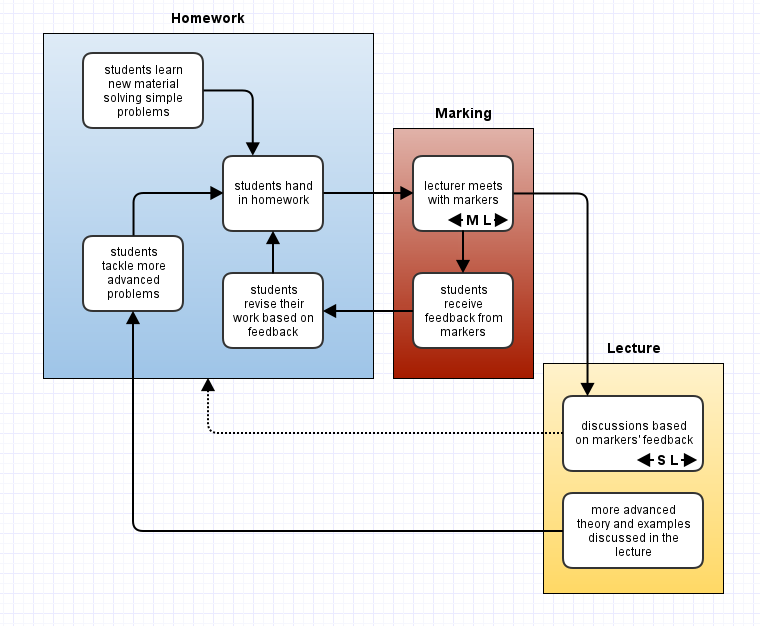 Running Algebra II. The arrows between boxes of different colour indicate the flow of information or feedback. The double arrows ML and SL symbolise bi-directional feedback between markers and lecturer and between students and lecturer.

There were two types of questions in the homework. Most of the questions were marked based on honest attempt whether the answer was right or wrong. For these questions, the markers were not required to comment anything if they did not have time for it. The students could later compare their solutions to the model solutions. On the other hand, a few questions were more substantial, usually requiring a written proof. These questions were marked based on the quality of the answer – not only of the mathematical correctness, but also the quality of writing. It the solution was not adequate in the first week, the student was encouraged to resubmit the question the following week and would receive the marks after the resubmission.

In applying the above methods, I faced several challenges. As already mentioned in my previous post, the lecture system in Durham is very rigid. My lecturing hours (twice 50 minutes a week plus a fortnightly “problems class”), as well as tutorials (50 minutes per a 15 person group fortnightly) were all prescribed to me. Also the teaching assistants giving the tutorials and marking the homework (mostly separate people, to my surprise) were decided for me. One major difference with Extreme Apprenticeship method in Helsinki was that I could not provide the students with a drop-in workshop with instructors that would always be present. Another challenge was that the other teachers in Durham that I got into contact with had very little experience about any of the methods I was going to apply, so I could not count on their advice as much as I was used to in Helsinki.

The biggest obstacle, however, was that the students were in general unaccustomed to anything else than the traditional teaching style where the lecturer writes on the blackboard and students take notes, which they then later refer back to when doing their homework. This limited background, of which I only learned gradually when I was already teaching the course, created a lot of mental opposition towards my teaching right from the start of the course. Of course, I was prepared to explain any new methods I would be using, so that the students would be aware of what was expected from them and how they would benefit from the diverse exercises, but in Durham I felt I was required to explain myself much more than usual. There was a constant need to reassure the students of the fact that they were indeed learning the necessary skills even when they did not recognise the “unconventional” methods we were using.

Despite initial misgivings, the students gradually learned to work in the new way, some quicker, some at a slower pace. However, student feedback questionnaires half-way through and at the end of the course show that the students were not in general happy with the lectures, saying that these were useless and not teaching them anything. Being inefficient is a well-known problem of mass lectures, and the amount of negative feedback on this aspect seems only to indicate that the students have not previously recognised this inefficiency. On the other hand, the prepared course notes received a lot of positive feedback. It seems to be very rare in Durham that the students would be given such complete sets of notes.

During the course, I observed the students closely in order to spot any learning difficulties resulting from the change in teaching style. Some individuals indeed claimed that they were facing serious difficulties, but on the whole I could see no significant indication that anything would be going wrong. Even if the students complained, they were still clearly learning. Their results in the final exam were as good as would be expected from such a course in general.

While one might not experience any obvious adverse effects from the different kind of teaching, it would be good to know whether my efforts actually made a difference in the end. From the teacher’s point of view, I certainly felt that I was spending my time much more meaningfully than I would have using a more traditional style, and that kept me highly motivated throughout the year. Many students also changed their minds about my methods and gave me praise in private emails and conversations. One student said that I had taught him to write proofs, and claimed that this had helped him in the exams also on other courses. Some physics students thanked me for giving examples of physical applications and for teaching not only the content but also the method of studying mathematics. Another student, who had originally despised my lecturing style, thanked me in the end, saying that during the course he had realised the value of his own work and that this was the most important thing he had learned from the course.

The last mentioned comments show that the methods I employed were about so much more than straightforward delivery of definitions and theorems. The students were taught to read and write mathematics on their own and construct their personal understanding instead of simply memorising results and methods. Although this kind of instruction may be unusual to see in the Durham maths community, I trust that my example shows that, if found valuable, it is fully possible to implement.

Extreme Apprenticeship promotes active engagement of the students. Each week, the students start studying a new topic by solving problems given by the teacher. They get as much help as they need from the teaching assistants. 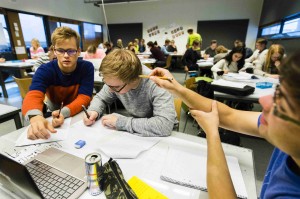 The physical learning environment we have created in the middle of our department is an important part of the Extreme Apprenticeship method. It encourages the students to collaborate with each other and interact with the teaching assistants. 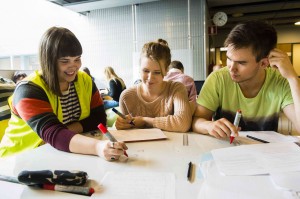 The students hand in their solutions so that the teaching assistants can read them and give feedback. Emphasis is on learning how to write mathematics, which is very difficult for most students. If the solution is not good enough, the student has an opportunity to improve it. The feedback is two-directional: by reading the students’ answers, the teachers get to know what kind of problems the students have and can react accordingly when planning the tasks and lectures. 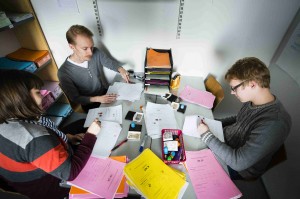 After the students have worked on the course assignments, there are lectures. The students have already familiarised themselves with the topic of the lectures by doing the tasks. This is a simple and effective way of making the students prepare for the lectures. The lectures are not for delivering content or going through details. Instead, it is possible to discuss the meaning and consequences of definitions and to address misconceptions. The students do not need to just sit and listen, but they get to work in pairs, discuss with each other and vote on questions posed by the lecturer. 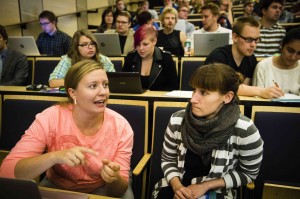 After the lectures, students are given more challenging tasks concerning the topics that have been discussed in the lectures. At the same time, studying a new topic starts with relatively easy tasks.

Compared to traditional teaching, Extreme Apprenticeship has increased student engagement and effort. It has enabled moving from rote learning towards conceptual understanding. Even though the students have to work hard, the feedback from them has been overwhelmingly positive. All in all, the method has had a considerable impact on the atmosphere of our department. The corridors and classrooms are filled with students who solve problems together and talk about maths with excitement and enthusiasm. 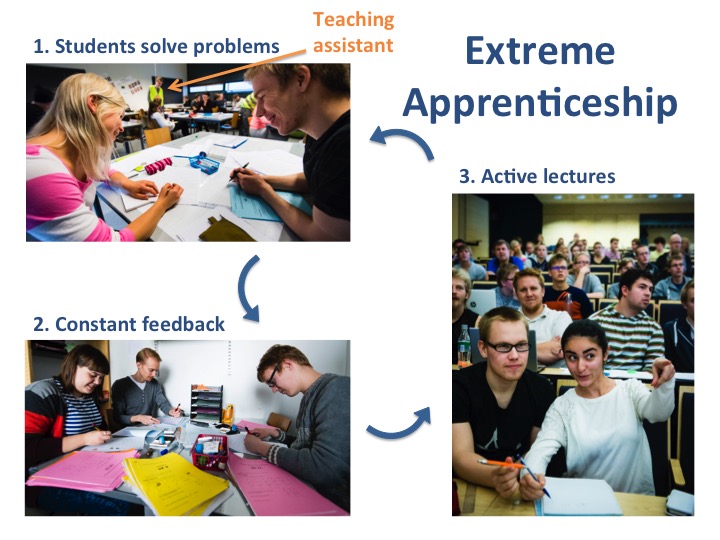