Her talk is the opening event of Hel’s Culture Club, a new talk and social series for the new Department of Cultures (and anyone else interested) for staff and students to talk about research, teaching, and whatever else they have been doing and would like to share.

Her abstract for the talk, entitled “Asset? Burden? Cultybraggan” is:

In 2007, the residents of the village of Comrie, in Perthshire, collectively bought the site of Cultybraggan Camp and nearby hillside land through a ‘community buy-out’ scheme under the Land Reform (Scotland) Act 2003. The site is managed through a Development Trust made up primarily of voluntary trustees from the village, and has goals of promoting environmental awareness as well as the unique cultural heritage of the site. Cultybraggan’s history of being first a Prisoner of War camp known as “Camp 21” during the Second World War, intended to hold ‘hardcore’ Nazi prisoners, and then as a Ministry of Defense training camp, engenders mixed feelings from residents and visitors alike. In my presentation I reflect on the weeks I spent in Comrie in summer 2017 as a Royal Society of Edinburgh Visiting Fellow at the Centre of Battlefield Archaeology, University of Glasgow. I use the case study to problematize the concept of community ownership of cultural heritage sites, especially those perceived as having a difficult or controversial history. 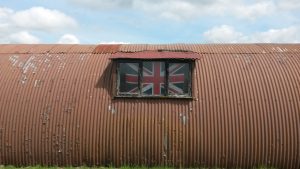 Exterior of a Nissen hut at Cultybraggan, Perthshire. Image by Suzie Thomas (June 2017).