When terror takes over, time and time again, and fear sweeps over city after city, our tomorrow never seems as safe as yesterday, anywhere. This year has been especially hard like that. Some incidents have us glued to the news reports and the internet; sometimes we barely have the strength to open the television. All these incidents make our world shudder, and they turn it into a darker place. At the same time, we know that we should not give in, should not let evil, hatred and fear win.

When contemplating the untimely death of a young girl, John Donne (1572–1631), too, felt similar helplessness in the face of the events and the cruel world around him. “[W]hen thou knowest this,” he concludes three times in his despair:

Every death, every violence, shakes us to the core, and we may, like Donne, see the world “a cripple” and “a monster” and resign to our own insufficiency. It feels that all we want to do is to hide and to protect our loved ones as best we can. Seems like the best thing to do.

In 1529, Cardinal Thomas Wolsey (1478–1530) had to step down as Lord Chancellor to King Henry VIII (1491–1547). His main successor as the king’s trusted advisor was Thomas Cromwell (1485–1540). In his play about Henry VIII (1613), William Shakespeare (1564–1616) gives Wolsey a moment to pause when leaving office, and Wolsey gives a long, moving speech to Cromwell. At the time of writing the play, more than eighty years after the event, Shakespeare already knew that the world Wolsey was leaving behind was to face turmoil and even terror, and Cromwell, too, was to meet a violent death. Yet, in the play, Shakespeare lets Wolsey instruct his follower – as well as the audience – on how to encounter the world:

[—]
Love thyself last: cherish those hearts that hate thee;
Corruption wins not more than honesty.
Still in thy right hand carry gentle peace,
To silence envious tongues. Be just, and fear not:
[—]

These are heavy challenges on a day when the news are again filled with violence and terror. Yet, even in hindsight, Shakespeare deemed it more productive to go with “honesty” and with “gentle peace” – and to encourage us to “fear not”. 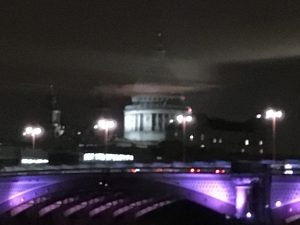 St Paul’s Cathedral, London, on the night of the terror attack on 22nd March 2017.