“Scientists must work together to save the world” a Nature news feature sums up high expectations towards interdisciplinary research. The argument goes, that questions about e.g. health, food, water, climate, are so complex that we need researchers across the spectrum of scientific disciplines to join their forces. Only then can we tackle these so called grand challenges.

Such high expectations seem to be a defining feature of interdisciplinary research (IDR). According to a report from The National Academies, IDR: “…can be one of the most productive and inspiring human pursuits – one that provides a format and connections that lead to new knowledge”.

Also research funding bodies, like the EU commission, take the message about the benefits of IDR seriously. Programmes such as the Horizon2020  fund research that crosses the disciplinary boundaries.  For Academy of Finland,  advancing interdisciplinary research is a science policy objective. Academy’s Strategic funding can only be applied by projects that have three different scientific disciplines represented.

However, despite all this top-down push to deliver successful IDR, crossing disciplinary boundaries does not seem easy for researches. For example, social scientists have often been disenchanted by working in interdisciplinary projects. They felt being partners, but found to be offered a service role.

As a sociologist working in an interdisciplinary PhD project, how to deal with the challenges and promises of IDR is a very pragmatic question. I am interested to know what makes interdisciplinary collaboration something that has added value for researchers participating in it. This made me wonder, are there rules and roles for successful IDR?

First, to find rules for collaboration that happens inter – in between- we need to ask where this place is.

Scientific research is organised by disciplines that form “bodies of specialized knowledge” as The National Academies report describes them. Disciplines are formed by researchers who work together to produce knowledge on their specific scientific object of interest e.g. psychological or biological phenomena. Each of these scientific communities also holds the traditions on how this work should be done, a stock of research methods.

Disciplines have the responsibility to educate and certificate new researchers. Students learn not only the specialized knowledge and methods of their own discipline, but also how to qualify as members of this group.

During research careers, the discipline holds the power to review the value of research, which means it controls the social and personal rewards attached to it. The ownership to the means and ends of legitimate scientific knowledge is what makes disciplines so powerful.

Exploring the interdisciplinary as a respectful tourist

So disciplines are research communities with their own historical belief systems and practises or “epistemic cultures” as Knorr Cetina described them in 1998. Thinking disciplines as cultures, we can see how they provide to people belonging to them with resources, norms, concepts, values and self-identities.

Interdisciplinary collaboration then takes place in somewhere between these familiar spaces provided by disciplinary cultures. I suggest that by entering this space of IDR where we are faced with new cultures as researchers we can apply the role of a respectful scientific tourists.

With the analogy I hope to emphasise the positive risk of adventuring into the unfamiliar and learning about new cultures. It is not that some researchers can remain fixed in their well-trodden territory, but IDR collaboration takes in turns all participants into strange fields.

Like all touristic explorations, interdisciplinary research is expected to take us out of the comfort zone without going too far away. Like tourists, researchers come with different personal limits after which interesting adventurers becomes a panic zone. What fuels the travel is curiosity, not forcing or being converted.

The place for a scientific tourists to aim is the learning zone as Rebecca Freeth argued on her fascinating Tampere STS Symposium presentation “At the edge: Practices to strengthen interdisciplinary collaboration” on 15 June, 2018. This is a place to observe the new culture, adjust, compare and pass ideas without fear of losing one’s disciplinary identity.

The benefits of anthropological mindset

Adopting the viewpoint of a respectful tourist also reminds that IDR is about interaction between different cultures aiming into an innovative dialogue. Because of differences in languages, beliefs and habits, misunderstandings are part of this interactive process.

Negotiating with differences will take energy. As a tourist one lacks relevant competencies to that cultural context. This can make one feel stupid, perhaps lonely, as anyone who has tried to manage life away from home knows. The outsider position challenges the sense of “knowing” and mastery, both likely to feel important to researchers in their normal disciplinary practises.

Intellectually, perceiving myself as a scientific tourist has made it easier to accept my own ignorance on other research disciplines. I have also found my own background in interpretative sociological tradition and in the STS to be useful.

I can assume a role of an anthropologist and focus on the social processes that construct different kinds of epistemic cultures. Being in this role provides me with an analytical distance where it is easier to compare different ways of thinking about science.

Having been educated to think about scientific knowledge as a social construct gives certain flexibility to cross the cultural boundaries. I have learned to take a deep breath before diving into the Natural Science’s jungle of terminology. Instead of trying to understand everything, I focus on following the narrative about a discovery.

Following the storyline and lead characters leads to the treasure; a new technology, a theory or a finding that makes my colleagues from biomedicine excited. This enthusiasm about creating a great story about a discovery is something all researchers share.

The example of a touristic viewpoint also reveals the potential power conflict in cultural encounters. Tourism has its uncivilized side. Sometimes tourists go purposefully to “arse around” because they see “away” as an opportunity to evade normal moral and social repercussion.

But often we tourists just are lazy and lack reflexivity. Learning gets replaced with colonializing interests; by being/knowing better than “locals” or decidedly exploiting the context to meet our own (superficial) needs. While usually unintended, this is something that I think happens quite often with us scientific tourists, too. For example, I feel to have undermined the craftsmanship and creativity required for designing laboratory experiments.

In scientific life, like in any other section of social reality, combining cultural differences with power differences can feed into negative stereotyping on “us” and “them”. For example, the existing hierarchy between the so-called hard and soft disciplines can invite such thinking.

I often have used these stereotypes, which can seem only neutral and pragmatic. Now I have started to think it unnecessarily contradicts compatible styles of scientific knowledge production. It explicates a hierarchy that undermines the value of the Social Sciences and Humanities (SSH).

I have experienced how such labelling can make us who represent SSH communities defensive and shun from otherwise beneficial dialogue with the Natural Sciences. The cost of using these musty terms seem higher than its benefits, so perhaps it would be time to move on.

These examples show what I think is the most important rule for IDR: respect. As with people from different cultures we scientific tourists should respect that other researchers know their disciplines. They have lived experience and expertise in form of knowledge and skills that we tourists only wish to learn about.

Making respect as the rule of conduct for IDR does not mean taking other disciplines’ knowledge for granted or as sacred. This is against the principle of science that reminds everyone to stay humble towards the fallibility of knowing. Critical thinking and good questions are important tools for all in the learning zone.

So how to put the rule in to practise? Listening and trying to understand each other’s points might be a good start. If every IDR participant has on their turn first an opportunity to tell what they expect from the collaboration and think to bring to the common table, then others can learn to make better questions and suggestions. For me it has been very useful indeed, if sometimes difficult, to hear how these “others” view my research topics and findings.

Sometimes it has been difficult to discuss about research methods with researchers who represent quite different disciplinary traditions.  Constructive and respective criticism is still welcomed, but I feel that criticising might not always be the best starting point for a discussion about such specialized practises. It would be almost like a Swede saying to a Finn that s/he do not know how to use the sauna.

I have suggested that those who take part in interdisciplinary research collaboration can assume the strategic role of a respectful scientific tourist. This might help to conceive what is special in adventuring into different research fields and epistemic cultures, while holding one’s disciplinary identity.

I find it useful to remember that despite the context, the experience of being a tourist is that of curiosity and clumsiness. Like a tourist in a foreign country, scientific tourists are likely to share an enduring interest in what for “the locals” seem strange relics and may be missing out important cultural nuances. Yet, the treasure hunt of new discoveries, nerdy humour and the pains of academic life can unite interdisciplinary adventurers.

Respecting and trying to understand each other because of cultural differences is the key in successful interdisciplinary collaboration. To make IDR a lucrative option to researchers requires good resources and institutional solutions. For those in their journey to the in-between, I wish compassion, patience and clear signposts.

Vera Raivola is a doctoral student and works as a junior researcher at the University of Eastern Finland. Her PhD project at the Finnish Red Cross Blood Service studies blood donors’ views on donating blood for patients and for biobank research use. You can find her on Twitter, ResearchGate and Linkedin. 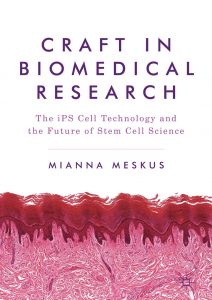 The STS Helsinki blog is happy to present and promote the recent publication of the book of one of our members, Associate Professor Mianna Meskus.

The book, titled ‘Craft in Biomedical Research: The iPS Cell Technology and the Future of Stem Cell Science’, tells us about the political and economic expectations placed upon stem cell research by exploring how iPS cell technology has made it possible to turn human skin and blood cells into pluripotent stem cells. These biotechnological advancements provide with unprecedented opportunities to study the pathophysiology of diseases, understand human developmental biology and generate new forms of therapy. Mianna Meskus approaches the topic by discussing non-human agency, the embodied and affective basis of knowledge production, and the material politics of science, developing the idea of an instrumentality-care continuum as a fundamental dynamic of biomedical craft. These three approaches serve as the main tools to discuss the form in which biology becomes technology by providing new perspectives to the commercialization and industrial-scale appropriation of human biology and, as a result, to the future of ethical biomedical research.

The book comes endorsed by Professor Charis Thompson, from the University of California at Berkeley, and Associate Professor Melinda Cooper, from the University of Sidney. About the book, Professor Thompson has highlighted the “extensive fieldwork” behind the book and that it “shows that as stem cells are becoming a highly versatile biological research tool, working with them continues to require demanding embodied skills and judgment, and dense political and affective engagement”. Associate Professor Melinda Cooper emphasises the central position of the notion of “‘craftwork’ at the heart of the laboratory” and the unpredictability of “the pathway from the lab to the clinic to the market” that only “high artisanal craftwork” can bridge.

The book is published by Palgrave Macmillan and can be bought and accessed by clicking here.